What kind/size needle and yarn should I use to knit blankets?

I am a beginner and have never knit before and I want to learn how to knit blankets as a school project that will span for a year an a half. My teacher told me that I should use bigger needles and thicker yarn, if I want to make one faster. However I d’ont know what consists of thick yarn or bigger needles. Could anybody give me tips and tricks and more information about it please? I want to make as many blankets possible in 18 months so the fastest and most efficient way would be best.
Thank you very much!

Bigger needles and yarn will definitely be faster. Bulky or super bulky yarn is probably the fastest. The needle size will be dependent on which weight yarn and what you are making. Another thing though… if you want to make the whole blanket/throw/afghan at once you will really need to use what is called a circular needle. It’s two needles connected by a long cable so you can have the whole blanket on it. The stitches will not fit on straight needles. OR you can knit squares or panels on either circular or straight needles and then sew them together. While I dislike seaming the squares are nice because they are portable. You can use different colors or stitches for each square which is pretty.

Since you are a new knitter I’d start with something like garter stitch which is only knit stitches on both sides. Here’s a few links to get an idea and then we can go from there -

This one looks super easy. It’s done in bulky with US10 needles, but because of the simplicity it could also be adapted for super bulky and bigger needles. 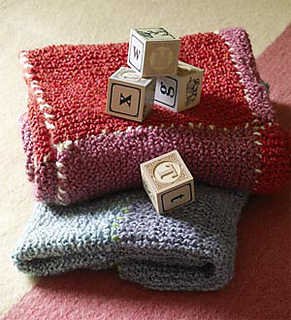 Bulky and US17 needles 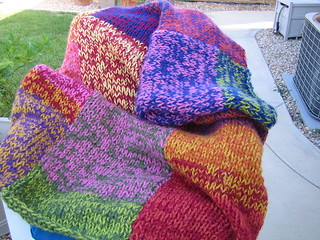 This one looks like squares, but is done in panels/strips in garter. 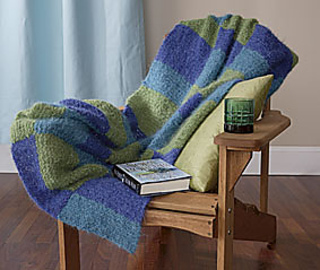 Let me know if you are really thinking of something else.