im looking for a pattern of waves that i can do with multiple colors on a scarf (yes i know i need to move on to a different clothes item haha) but the clincher is that the waves will need to start out big and get smaller… anyone have any recommendations?

What kind of waves? There’s ripple patterns, shell/scallop patterns or drop stitch patterns like the Seafoam stitch. Do you have a picture of what you have in mind? 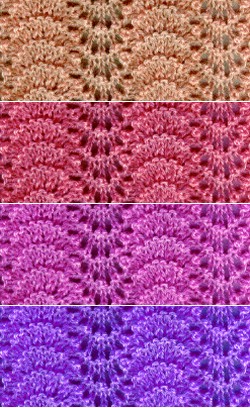 Free knitting pattern to learn the easy feather and fan stitch, with a closeup photo of the finished work.

yeah that one is cool looking too…

brolie - is the pattern available somewhere for the ear flap hat?
bailey

Sue, I love the seafoam stitch, thanks for the link!