I am almost done with the pair of Teosinte Socks already, but my SSKs are just loose and wonky and I’d really like to cast-on for these again with some new yarn I got on my trip. I tried doing SKP instead, also tried K2tog tbl (which I know twists the stitches) and also tried slipping the first st pwise 2nd kwise, but all seemed to give the same result. I found a clip of Cat Bordhi with a “hungry stitch” recommendation, but unfortunately, the nature of this lace pattern sort of prohibits the use of this method. (There’s no K rows in between the pattern rows and the yo SSKs just about overlap each other.) Washing/blocking didn’t really fix it either.

SSK is usually done slipping both stitches knitwise, but the other version I’ve heard of and use slips the first stitch knitwise and the second stitch purlwise. You said you slipped the first stitch purlwise and the second one knitwise. Was that just a slip (is this pun-like?) up or did you really do it that way? Try to do whatever you do quite gently, not stretching anything out as you perform the action. I find I can get a big looking stitch especially with the skp if I am heavy handed.

I’m not really a fan of ssk especially if it’s combined with k2tog as a paired decrease. They look too different.

I’ve found that this method SYTK works pretty well and is the least obvious so far. This is part three of the series of methods she shows. 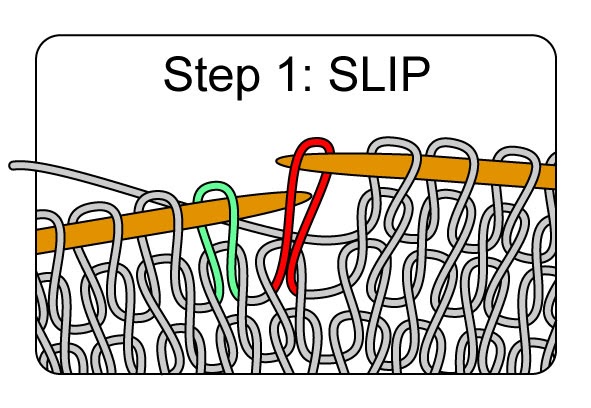 If you want to see the others scroll down to Stitches, increases, decreases and you’ll see the other four pages.

HIT "RELOAD" on your browser to get the LATEST UPDATES HOME : TECHKNITTING.BLOGSPOT.COM As of April, 2010, this index has been REPLACED...

I’m intrigued by the SYTK and looking forward to trying it, but you know, I’m spoiled by videos. I am in the midst of the heel turn on the second sock, but I’m sure it will make more sense when I actually have knitting in my hands with the diagrams. Thanks a bunch!

And I think I did have the kwise/pwise slipping backwards, not an accident.

Essentially, it just means reorienting the second stitch…easy peasy, if I have a chance tomorrow, I will try and do a you tube for it…

Really all you are doing is sliping the first stitch purlwise

I think you’re supposed to slip that knitwise, and it’s the next st that you ‘yank’ is purlwise. Then you twist the 2nd st, etc. It seems more convoluted to me than a straight ssk, or even skp.

huh…what do you know you are right, I have been doing that wrong…LOL…

I think you’re supposed to slip that knitwise, and it’s the next st that you ‘yank’ is purlwise. Then you twist the 2nd st, etc. It seems more convoluted to me than a straight ssk, or even skp.

Yep, that’s correct I think. It is more convoluted, but I like the look better usually. Once you get the hang of it it can go quickly.

the twist part is where i’m mixed up, is it twisting like a normal twisted stitch or the opposite way?

You twist it purlwise tbl, then when you knit it, seems to have a double twist in it. Steps 3c and d on the Techknitting blog show the twist.

That takes me to the main page to sign in. I couldn’t remember my You Tube info since I never have to sign in so I had to create a new account and I still can’t see the video.

Okay, I can see it now. It looks good, but you knit through the front like a normal stitch instead of the back of the two stitches.

Here we go…try this one…

Here we go…try this one…

Perfect! It was easy to understand!

fantastic!!! thank you so much!!! I am looking forward to trying it!

I know this is an old post, but I’m bumping it just in case anyone else was following it. (I discovered that there are actually a few sites dedicated to this very issue, always makes me feel better when I’m not the only one. lol)

it turned out that none of these fixes really made a terribly noticeable difference in my SSK appearance because of the nature of the lace pattern. There were no straight knit rows between the decreases and on top of that, after the first lace row in each repeat, the next row’s decrease involves the decreased stitch from the row before, so I think it sort of canceled out the normal fixes involving stitch manipulation.

However, here’s the good news: I read just yesterday that EZ stated somewhere (not sure which source) that wonky decreases and the like will be unnoticeable after some wear and laundering and I can affirm this is true at least in the case of these socks (and I can’t tell you how thrilled I am about that.) It still doesn’t look quite as perfect as the knit samples of the socks, but it looks good enough that I don’t scowl at them when I look at them and have begun a second pair in the same pattern.

The SYTK may have very well played a role in this, but I’m not sure because I tried multiple different left-leaning methods throughout the socks (but SYTK is the one I stuck with in the end.)