:figureditout:
Hello, I just signed up to this forum because I love the videos that have been so helpful to me in accomplishing my goal in teaching myself to knit. I learned how to do it from the videos! Yeah! Go Me!!!

Now I have found something that I truly want to do. I have watched several videos that are not from this website but I just can’t get it. I’m hoping somebody here can help. I like “words” to go along with pictures.

So, brioche stitch, two colors. What I am really trying to accomplish is to make a 2x2 ribbed scarf where the purls and knits are different colors. So the ribs are one color and the valleys are another and when you reverse the scarf it is the same beautiful pattern on both sides. I found this video on brioche knitting that did exactly that! However, I cannot for the life of me seem to be able to figure out how to get it right.

Starting from the cast on it seems simple, like every other cast on. However, I started my cast on with two colors which was apparently a total waste of time, but … I did learn how to do it!

The two videos I have been watching over and over show the brioche being done on either DPN’s or in the round. I wonder if this is the ony way to do the brioche stitch?

So, I want two colors to make a scarf in brioche stitch. Pretty simple. OR… just a basic 2x2 rib with the ribs one color and the valleys the other… when I tried to do my knits black and my purls grey, I got the two colors but not quite right… one side was grey and one side was black… instead of the contrast I saw in the brioche stitch…

OK… that was a whole lot I know for a first time… but any suggestions are welcomed.

I have had tons of hits for this scarf , which I first found here . I got the pattern from Borealis Yarns . When I had a request for the pat...

I wasn’t sure what you meant, but I found this pattern. It looks like you need to do it on a circular needle or a double pointed needle so you can push the work to the other end for the next row. So it appears that you knit a row with one yarn, then slide the work over to the other tip and use the other yarn. THEN you turn the work.

i hope i’m posting this right i’m new. my question is do i cast on both colors at once for two color brioche stitch.or just cast on the mc color, start with the second color on the other end?

For the pattern Ingrid posted, the cast on is with just one color.

You could experiment both ways and see how it looks.

Because I’m deeply involved in 2-color brioche right now, I’m posting to this somewhat ancient thread: but that’s alright because I am myself more than somewhat ancient. [grin]
Here is THE BEST pattern to learn on, from the Queen of Brioche, Nancy Marchant: 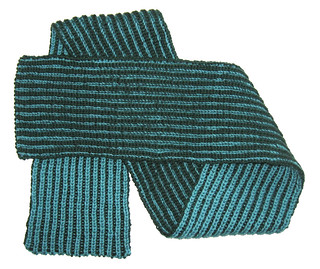 This is a basic 2-color brioche scarf with beautiful edges.


HOWEVER ! I was able to kinda get on top of (note that I don’t say “master”) this glorious knitting stitch by buying a class from Craftsy and struggling through - no, not through, but part-way through - its intricacies.
The moment the teacher decided to change to continental knitting, I went away.
Once having taken the basics on board, Nancy’s BEBEB scarf got me to the point where I can now claim to be at least familiar with the methodology, I’m about to undertake another Craftsy class on how to progress: just waiting on yarn from Love Knitting.
1 Like
salmonmac December 3, 2017, 10:20am #6

Thanks for the pattern link, M-R. It’s a beautiful scarf using a very nice technique. I’ve taken a class for this as well but I like the directions in this pattern for their neatness and simplicity.