Trouble with gusset of socks.

I have tried knitting socks before and I only got to the heel before I got stuck and said “nope, not going any further.” I have interchangeable circulars and 1 of the cords is very short so maybe I could knit socks without having to do magic loop, at least for adult size socks but for baby socks, I think I will still have to do magic loop or at least have part of the cord sticking out until later on in the round.

I don’t bother correcting the jog anymore because it is just so frustrating not having it look as though I only knitted in 1 color rather than 2(picking up from the row below causes me to have this stitch that looks like it has 2 colors even though I only used 1 color of yarn for the stitch itself and is the way I learned how to do jogless stripes). I don’t bother with cast on or bind off related jog either. I just knit it.

But the gusset is where I have trouble when knitting socks. I can knit the cuff just fine and I can turn the heel just fine but I get stuck when I try to knit the gusset. I don’t use DPNs because I have had bad experiences with them before(namely twisting on a non cast on row, they may say that it won’t twist but that isn’t my experience with it), instead I use circular needles which have an absolutely 0 chance of twisting an a non-cast on row and I just have to worry about whether or not the cast on is twisted.

Anyway, how can I avoid getting stuck at the gusset because the gusset is the most confusing part of the sock for me.

Try a different heel. @Mike undoubtedly has an encyclopedia of heel types and I’ll bet he’ll be able to make a recommendation. Short rows, fish lips kiss, Mike? What do you use?

In regard to dpns, if you start with the small circular or even magic loop, you could switch to dpns. The chance of twisting is minimal after working a few rows. (BTW, I’ve managed to twist hats on small circs.)

What’s the problem with the gusset? Picking up the stitches to start it or the decreasing?

I like to pick up the stitches by running a crochet hook or another needle (sounds like you have some unused DPNs that would work) through the slipped stitches so I can be sure I’ve got them even on both sides and in all the stitches before I move on. I don’t want to get a round after the pick up and discover I missed one.

If it’s the decreasing that’s the problem, with circulars I would use row markers and counters at both sides to decrease every other round on both sides.

@salmonmac Fish lips kiss is after I learned socks, I do want to look that up but when I’m there what I do is automatic so I don’t pause to think of it. I do French Heel short rows. This is the list I’ve had printed out since I started making socks. I use it for the stitch counts. http://socknitters.com/Tips/heels_by_the_number.htm

Ah, so that’s your secret! So organized. I’ll have to look up French Heel short rows. Thanks, Mike.

Fish lips kiss would solve Caters’ gusset problem as there’s no gusset. Might be worth a dollar.

Might be worth it for me since I just got toe up started. 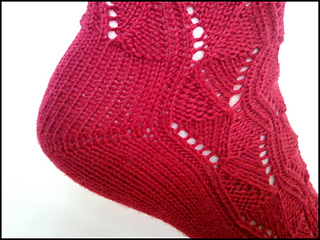 Sock Heels Perfected!!! An innovative, new method for knitting perfectly-fitting, beautiful, simple heels. And the eBook is only $1.00!!! Come join the Sox Therapy group to see photos and join a fishy kissy knit-along.

This nicely illustrates the French and Dutch heels:

Last week, we took a look at 9 sock heel types from Weldon’s Practical Stocking Knitter. As I puzzled over the 19th century instructions for working these heels, scrutinizing the illustrations, I thought to myself: “I wish I had a photo of these...

I didn’t even know that was possible. I thought twisting on a non-cast on row was exclusive to DPNs. I have never gotten a twist with circulars unless it was the cast on.