Single row stripe doesn't line up in the round

I made a pretty simple hat in the round using circular needles. I did not use a pattern, but just trial and error and became better acquainted with my good friend frog.

It turned out okay.

I put in a contrasting color at a few places, trying out that two handed fair isle technique someone posted before to practice. I used no pattern for that either, just a couple rows of diamond shapes plus several single-rows of the contrasting color.

For some reason, the diamond areas lined up well, but the single row stripes all seemed a little off at the beginning and end of the row.

I attempted to line up the rows better when I wove in the ends on the inside of the hat. It seems to have made the joins more lumpy, but did not fix the alignment very much.

Will this be fixed with blocking?

I would not be surprised to learn that I made some very basic mistake when connecting the rounds or something like that, but I just can’t figure it out.

I took a couple photos – one is a close up of an area with the mistake, and the other is a washed-out photo attempting to show the whole thing.

Any ideas or advice would be appreciated.

That’s because knitting in the round is really a spiral. I’m not sure blocking will work, but it’s worth a try. How well it works may also be determined by the fiber.

Here’s a couple methods you can try called “jogless jog” next time you do stripes in the round. They aren’t perfect, but they do help. 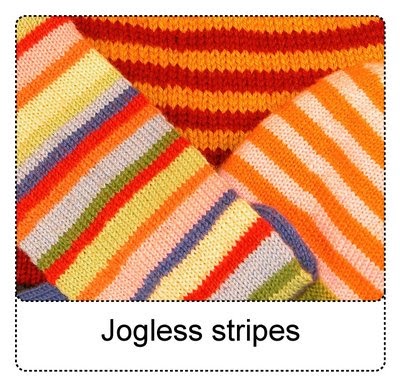 includes a how-to click picture Knotingale asks " can you explain the 'jogless' join method for stripes knit in the round? I can't under...

yup, do not worry. that happens to a lot of projects.
the jogless methods do make it better. Find out what works for you.

often they work better, too, if the stripe is more than 1 row tall, but if the design calls for it… well, 1 row it is!

this project here has the problems summed up, as well: 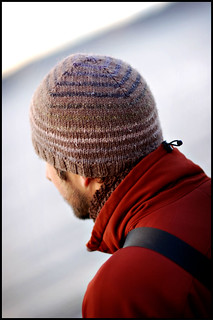 A simple striped beanie pattern that plays with self-striping yarns and is perfect for using up worsted weight yarn scraps and practicing the jogless stripe technique.

Thanks! “jogless jog” was a term that I didn’t know and your links and that term helped me search for more ideas.

It seems like none work as well with single row stripes, but after experimenting with several of them, the one that helps the most (without leaving holes) is roughly adapting the method to knit into one leg of the stitch beneath the first of the new color together with the new color.

I don’t think that is really supposed to work with a single row stripe either, but I ended up also twisting those two “stitches” together before knitting in the new color to raise up that first stitch a little, then again with the next row returning to the main color, lifting it up a little more. Not perfect, but better than the first try!

Did I mention I love experimenting?

This jogless jog method also works well for garter stitch in the round to make the changes between knit and purl rounds less apparent.

It is so cool that you made your first hat by experimentation and without a pattern. I know you learned a lot, had fun and are unstoppable now!

There are two ways to knit single round stripes, helix and bull’s eye. Sounds like you did helix stripes and maybe wanted bull’s eye stripes. I wrote a tutorial on the two types: Knitting Single Round Stripes

This is something I constantly struggle with - that is, going from knitting to purling in the round - i have tried slipping the 1st. st. of the second round
, but it always seems to leave a hole that i need to close up when I am done. Some people lift the bottom stitch onto the left needle, and knit the 2 sts. together, and move their marker one stitch over; others do not. Can you explain what your method is?

It’s simply to slip a stitch with yarn in back, then purl the next stitch. I haven’t found that it leaves a hole. Then when you get back around to it, purl that stitch, and slip the next one and switch to knit sts for that round. At this point I don’t move the marker, but you could, then when you’re finished with the garter st, put it where you want the beginning of round to be.

Thanks, will keep this for reference when I an doing this the next time. Thanks so much for replying to my inquiry.