Rowing/lines in Stockinette Stitch~~ will blocking help to remove?

I am making this Santa garland.

I’m almost done with the long underwear part, but I hate the rowing out or lines… not sure what it’s called, in the stockinette stitch. Will blocking help to tone the lines down? If you do recommend blocking, do I get the whole thing wet, roll it in a towel to blot up the extra moisture, then pin? … or maybe just spritz, then pin instead of getting it completely wet?

I’ve experimented with the combined, or combination knitting and didn’t like it. I suppose I could use a smaller needle to purl.

Thanks so much for your help,

Rowing out occurs when your tension on the purl rows is looser (usually) than on the knit rows. Blocking may help some, try it.

Thanks for yor help,

I knit a lot of socks and caps on DPNs and I’ve always seen the ladders disappear in the first washing. I think you’ll be fine

Thanks, Angela. I hope so. Had planned on making a bunch of them and giving as gifts, but if the blocking doesn’t work and I can’t resolve this rowing issue… maybe not! :sad:

You should be able to fix it in future items by using a smaller needle on the purl rows. Eventually, your tension will probably even out. Experiment with different ways to purl or hold your yarn while purling.

I haven’t tried using a smaller needle yet on the purls, but that’s what I’ll try next. I knit continental and usually give each purl stitch an extra tug to snug it up a bit, but I think I’ve been pulling too hard and that’s creating the lines. I’ve been experimenting with different levels of tugs… it’s driving me nuts. Wil try the smaller needle definitely. Thanks, Sue.

Yeah, pulling the yarn may be making your purls [I]too[/I] tight. Cast on about 40 sts and knit with a regular tension. Or purl all rows, that’ll give you some practice…

TooCircular, it drove me nuts to. However, since I was practicing and practicing, I soon found out that I really shouldn’t sweat it and let the washer fix it. In every case, regardless of the type of yarn used, it’s fixed itself. Washing things, even if it’s by hand in a very delicate detergent seems to solve a lot of problems we notice when we’re done with a project and begin looking at it with a clearer eye.

Recently, I posted here about some yarn I had bought and said it was like knitting in molasses. It also caused allergies on my hands and it broke my heart because it was my favorite yarn. The company not only replaced that ball of yarn, but they gave me 4 more for having gotten one ball of yarn that was washed poorly. After I finished the scarf and washed it in some Woolite in the washer, I literally could not tell which end had the bad yarn, and which end was the good yarn. I’m a firm believer, now, in washing before judging.

I hadn’t thought about purling in [I]every[/I] row for practice, Sue. Thanks for that.

Angela… it’s good to know that some water and mild soap covers a lot of sins. Thanks!

Some yarns don’t block well, but it’s worth a try.

Here’s a few articles on rowing out. 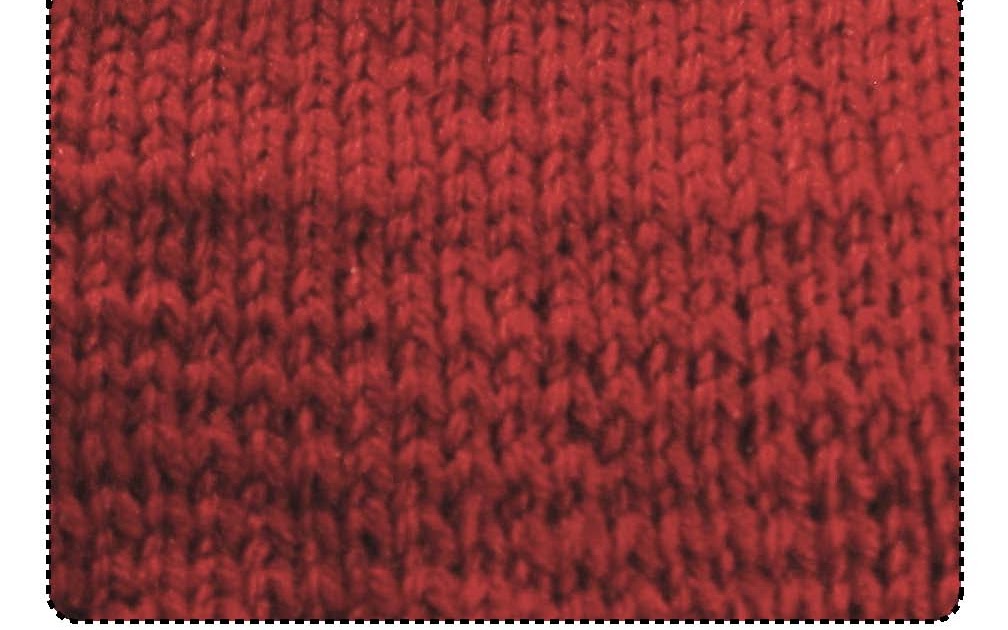 The human eye is great at seeing even the most subtle patterns, and for good reason--for much of human history, survival depended on knowing...

The nonaknits link is one I haven’t seen before. All very helpful!!

Just an update… the lines did not come out after washing the piece, but there is a silver lining. I practiced and practiced on the purl stitch and now I’m not getting any more lines in the stockinette stitch. I’m still knitting continental, but I made some changes by sticking the right hand needle a little further into the stitch, then positioned the yarn so that it’s wrapped more around the needle instead of a little ways around, plus put a firmer wrap on it, then drew it through. I’m drawing a lot less yarn through than I was before so the stitch is matching up much better with the knit stitch. Also don’t have to tug on it every time I make a purl… it’s good to go. Thank God ~ I hated those lines. Plus, with a last name like mine (Oyster, I’m not kidding,) how could I NOT know how to make a good purl??

Plus, with a last name like mine (Oyster, I’m not kidding,) how could I NOT know how to make a good purl??

Glad you got it figured out!