No free T rex pattern, maybe I should knit a T rex without a pattern

So I figured, “Okay, I can’t seem to find any free T rex patterns so maybe I should just knit a T rex and write down the pattern as I go.

Using multiple shades(like light and dark) would help but even then, I still don’t know if I have enough.

But there is 1 thing I would have to figure out before I start knitting. How many stitches to cast on.

Knitting it flat makes it easier for me to sew and stuff whatever that piece is. Plus it helps me avoid 2 things that I have had happen while knitting small things in the round and those 2 would be:

It sounds like you have the planning well in hand. Perhaps you could put your own pattern out there when you finish? I can see multiple colors, maybe even random color changes (sort of a cami pattern) for a T-rex.

I wonder if dropping down a couple of needle sizes would help with holes and ladders especially on a stuffed animal? It’s curious that you have twisting after the first few rows for circular knitting. Usually, if you can get through the first knit row, you’re ok. You might try knitting a row or two flat and then going to in the round.

I like the KLL and KRL for increases. They always seem more organic to me and less likely to show holes.

Well, just some random thoughts on your project. Good luck with it and do post a photo please!

Not sure where you looked and it sounds like your search words may be too broad, but I found a few free ones on Ravelry by just typing in t-rex and filtering for free. Even though you seem to be figuring it out on your own here’s the ones I found. 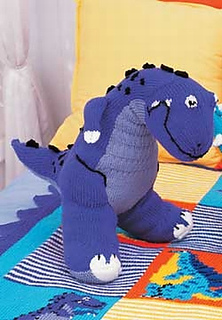 This squishy T-Rex is both menacing and lovable. Raaar! (Patons Yarns) 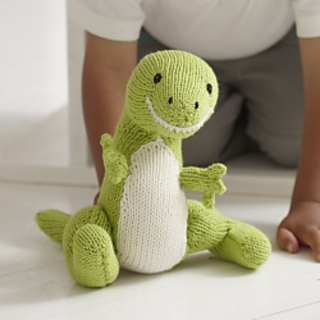 Knitted using a soft, washable, wool cotton yarn, it is both tough and cuddly. As with all toys, make sure the poly fill you select is also washable. There are a variety of poly fills available, so choose one you are comfortable with, depending on... 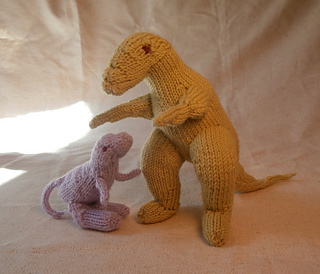 Tommy is a cuddly little tyrannosaur, about 11 inches long, standing on his two back legs. He’s knit in the round with dpns, from nose to tail, using common heel techniques from sock knitting. The legs are knit in the round, too, and sewn on, making...