Hi all. Thanks for letting me join. I have a question about a pattern which involves casting off and casting on in the same row. Is this the place to ask? Thanks in advance x

Welcome to the forum!
Oh, sure, just about any of the categories is fine. Please let us have the pattern name or a link to the pattern (even if it’s a paid pattern). It’s ok to post a few rows of the pattern but not a large portion of it due to copyright problems.

Hi again. I understand I’m not allowed to post too much due to copyright. Its a Search Press book and ISBN 978-1-84448-403-4. It’s s Lesley Stanfield’ s pattern and it’s a straightforward knit and kfb for the 1st few rows. Then it’s cast on 3 by knitted cast on method, then cast off 3st. Its driving me mad and I’m sure it’s easier than I’m making it out to be! Thank you Philippa

Is it from 100 Flowers to Knit and Crochet?
There are several pages of patterns on Ravelry:
https://www.ravelry.com/patterns/search#view=captioned_thumbs&query=lesley%20stanfield%20knit%20100%20flower&page=1&sort=best
May be the knit cornflower?
Casting on 3sts then immediately casting them off gives you the little spikes or fringe that you see at the outer edge. 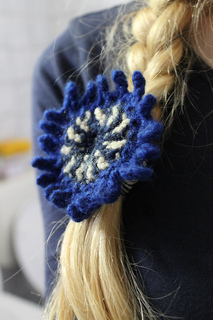 The cornflower pattern is similar to the lavender. If I cast on 3 then cast off 3 then I’m still left with 1 stitch on RH needle!
Sent from Yahoo Mail on Android

Yes, you’ll have one stitch left on the RH needle (It takes 4sts to cast off 3) but if the next row doesn’t explain what to do with that stitch you could slip it back to the LH needle and continue. Would that work?
When you cast off, do you knit the sts onto the RH needle or just slip them? 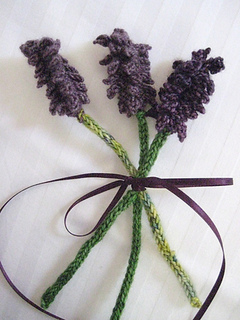 I found this in the Ravelry forum posts about this pattern. I tried it and it worked for the row: k1, (cast on 3, then cast off 3, then k1) 4 times
“Remember, to cast on 3 you need to use one of your 9 stitches so, Knit one, using the next stitch, cast on 3.
Now, to cast them off again, you need to knit 2, pass first stitch over second, knit 1, pass stitch over, Knit 1 pass the stitch over so you have now used the stitch you started your cast on with as part of the cast off.
You have now used 2 of the 9 so when you repeat the K1, Cast on 3, cast off 3, 4 times, you have only 1 stitch left so you knit that.
Believe me, it was easier to do than to write down.
Purl back along the row and repeat as often as the pattern tells you to.
It really does work when you realise that you need 4 stitches to cast on 3 and to cast off 3.”