How to flatten curling edges without excessive blocking?

I knitted a beautiful headband in a pointelle lace pattern. In spite of gentle blocking, the long edges roll under and curl. I would like the entire surface of the headband to lay flat (as in the photo below.) I’ll share the first few lines of the pattern presenting the curling issues:

I am considering laying a darker blue 3 inch acetate satin blanket binding underneath the light blue headband and sewing it with matching thread along both long edges in the hope the band will then lay flat.

Once I sew it will be near impossible to rip the thread out if my idea does not work. Does anyone have other ideas on how best to solve this curling problem? I have blocked the item 3 times and hesitate to do it again as I want the yarn to stay alive. Thanks for ideas or suggestions! 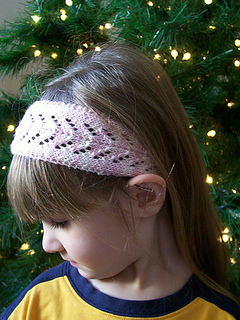 This is an adorable headband that is easily made larger to fit any size head.

That’s cute! It’s a stockinette based pattern so it is going to curl and even blocking won’t cure it completely or at least permanently. What yarn did you use and how did you block it?

Ugh, I sure hope I can find a way to keep the edging flat as the curling is odd looking on a headband. I used Berroco Comfort DK sport weight 50% fine nylon and 50% fine acrylic yarn. I laid a damp handkerchief over the headband and lightly steamed it with my iron - without actually laying the iron on the fabric. I’m concerned that if I lay the iron on the cloth it will flatten the yarn too much. I did this 3 times. It curls as tight as a pig’s tail.

Part of the problem is that acrylic and other man made fiber doesn’t block like wool does. It can be done, but it’s not usually permanent. And no, don’t lay the iron on anything acrylic. It can melt it. See if this page might be of help.

I am a reader of Anne Hansens blog, Knitspot . She does the most awesome lace shawl patterns in the universe. She has just released her new...

Thanks Jan! Kewl stuff and thanks for the tutorial.