I’m following one of Marianna’s Lazy Daisy days patterns, and i’ve started a top down cardi, but i’m half way down the raglan increase and I notice that the pattern is wrong, the two front panels there is 22 on one side, and 21 on the other, can I add a stitch or is it gonna look stupid i’m loathed to rip it all out and start over… Any advice?

Welcome to the forum!
I’ve made several of these and don’t remember an extra stitch problem on the fronts. On row 19 you can see that you should have equal numbers on the fronts and sleeves. If you’d like to increase a stitch at the raglan, you can or you can just continue as you are doing. A stitch more or less isn’t going to make much difference. 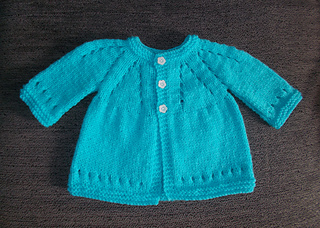 Thousands of knitters have enjoyed making my now famous

Thank you, i’ve added a stitch at the boarder, that is not the cardi i’m knitting, though i’ve just finished two of those in the short sleeve, which is why i’m suprised at the mistake…

I’m doing this one… https://mariannaslazydaisydays.blogspot.com/2016/05/jasmine-baby-jacket.html and i’m doing the 6 to 9 month size… i’ll copy and paste a couple of lines.

You can see here, that the two front panels have different stitches… K22 then k23 on row 25, and all the way through… its diffently wrong… i’ve added a stitch, just after the boarder which i’m doing in a moss stitch, I hope its not noticeable… as I say i’ve done a few of her patterns with no problems so, was quiet surprised and didn’t count the stitches to see if all was even- just followed the pattern counting what she told me to do…

Thanks for the pattern link. It’s clearly intended and I’m wondering if it’s to balance out the buttonholes on one side. You can send a message to Marianna Mel on Ravelry and ask. She usually is very responsive

It doesn’t seem right to me and none of her other patterns are this way and if you look at the raglan finish line, she had 30 on each side.

I haven’t been knitting top down long, so, yeah I could be totally wrong and it is intentional. Thank you for your help. Either way