I posted before about wanting to get a hold of the Mermaid Jacket pattern, but it only being available in kit form, and got some good ideas, but here are the results :

I emailed the retailer and got a ‘no, bye’ email back. I asked if there were alternative yarns I could buy or if I could just get the pattern. But they’re obviously bound by the designer, so I emailed the designer.

In my email I said that I was fully aware that whatever I made wouldn’t be the exact same as a proper Mermaid Jacket, that it wouldn’t have the same drape, feel or look, but that I really wanted to try it. I asked if I could just buy the pattern or if there was an alternative kit available. I asked if there was any solution. But I got her reply today and it said, essentially, that the pattern is just a way to sell the yarn, so no yarn, no kit, and there’s no non-wool yarn.

I get that designers have to protect their work by not having people passing off poor copies as the designer’s work - it reflects badly on them. But really, I just want the pretty pattern, but not for £70 ($140). It’s crap enough having to buy special dyes for non-wool yarn when everyone else gets to use vinegar and kool-aid, or pay over the odds for equivalent yarns in alternative fibres, and even that I never get a chance to feel some Malabrigo. But seriously, when did people get so far into yarn-snobbery that they won’t let someone who medically can’t use their yarn but loves their pattern give it a go?

By not allowing people their choice they lose sales, big time. I know so many people who want to knit that, but won’t buy that yarn. There is another designer who designs for Rowan also and she only does kits…ridiculous.

I have no problem with copying patterns of people who do this. It peeves me off.

Well poo on them. Maybe you could find a similar jacket and make that? It does look pretty unique, but… :shrug:

I know how you feel. I have a lot of limitations too. I tend to react to pure lamb’s wool/ sheep wool. I would love to try some of these other natural fibre yarns instead.

The whole kit is awfully expensive. Have you considered finding someone else to share it with and splitting the costs in someway? Just a thought? Maybe someone else would buy the yarn from you or buy equal value yarn in the type and colors you need?

how amazingly dumb of that designer. yeah, we get that you want to sell yarn. fine. yes, business is business. whatever. But if you even suggested you would buy different yarn, but wanted the pattern too and they STILL said no?! unbelievable.

so absolutly dumb to not at least offer the kit in a different fiber. sure wool is nice, and the pattern is pretty, but some people live in warm climates, or have wool allergies. that’s a LOT of knitters they are excluding from buying their patterns or even kits but not even offering them. Maybe you could find the pattern for sale through ebay or another knitter destashing? are you on ravelry? you could post you inquiry there.

That jacket reminds me of the designs here for overall shape. These are a bit more ‘frilly’ but might be adaptable?
http://www.whiteliesdesigns.com/patterns/lcardigans.html
Just a thought.:??

someone on ravelry recommended this book, and in particular … this sweater from said book:

Thanks so much for your support guys, I thought I was going a little off the deep end about it, but it just seems like really poor customer relations and I’ve got the stage where, before I would have shared the buying of the pattern with someone, but now I just don’t want to give them any money. I’ll probably get over that when I calm down and go back to wanting the pretty pattern, though

I like the suggestions - I’ve always loved whitelies but, for once, I love the clean lines of this one. The Norwegian pattern looks quite close, I could probably adapt it. To be fair, I could probably come up with a fairly similar design myself, may try that and see how I go. It seems to be sideways garter stitch with short rows, which should be relatively easy to figure out, with some trial and error. A project for the winter

(Incidentally, I’m having a 24 hour blood pressure monitor done today and this whole issue hasn’t helped, but I don’t think my docs are going to take ‘knitting stress’ as a reason ;-))

Forgot to add - if anyone has the pattern and are not using it, I’d be happy to buy it from you

I checked ebay but there’s only kits sigh

P.P.S. Damn Ravelry - went to look for alternatives and found 5 new patterns that are totally unrelated but that I must make now!

Maybe someone who would like the yarn would be willing to buy the kit and split the cost with you, and send you the pattern. Could you handle the paper if it has been in contact with the yarn?

What kind of yarn comes in the kit?

I found this link mentioning what my biggest offender has to say about the whole thing.

today, i got an email from KIM HARGREAVES. wow. she reads and answers her own email. imagine that. i was trying to figure out where i coul...

The thing is, I would GLADLY pay 10-15 bucks a pattern if they are awesome patterns like some of the ones I have seen in the kits. How is it that they would not make money if they sold it like that, but somehow they make money by pairing it with the yarn. Maybe it wouldn’t be as big a profit margin, since Rowan yarn is jacked up about 80% of what it is actually worth, but you’d be making out good. How about doing something like Louisa Harding and have those nice books with about 5 patterns in it?

It’s just ridiculous, and really it just hurts them, but the excuses really bother me. Fiber Trends manages to make money and all they do is sell patterns, so don’t feed me a line of doody about not making a profit.

I agree 100%. I’m also allergic to wool. Also hemp, jute and just recently found out… bamboo. If the designer has a good design it should be able to stand on it’s own and not have to be sold in a kit to make a profit. As it is, my yarn selection is limited and I don’t need any further limitations thrown at me.

Based on the reply to CY maybe she’d be open to creating a kit with a different type of yarn. Then she’d get her money and those with wool issues could still have it. Might be worth it to suggest it to her.

Norsk Strikkedesign is an amazing, magnificent book.
But it’s gone out of print and if you want it,
get it NOW.
Amazon is listing exactly two copies here: 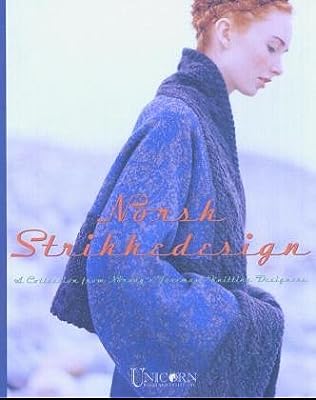 N.W. Damm & Son are proud to present a design book where the designers have had total freedom to create specially designed and unique garments. Included are twenty-two practical designs which show how ...

I hate it when books go out of print! Will try and get some money together…