Since Salmonmac said she had to see a knitted chicken, here’s the first of three in my coop. Be careful what you wish for.

This is the UK Chicken, so named because that’s where it wound up going. A high school friend of Wendy’s (my girlfriend) lives in London and they occasionally exchange stuff they’ve made. Kate (the expatriate friend) does quilts (among other things) and had sent a small cat-sized cotton quilt, so it was our turn. The only specification was that the main fiber had to be cotton. So Wendy made a hat/scarf set and I embarked on … this. 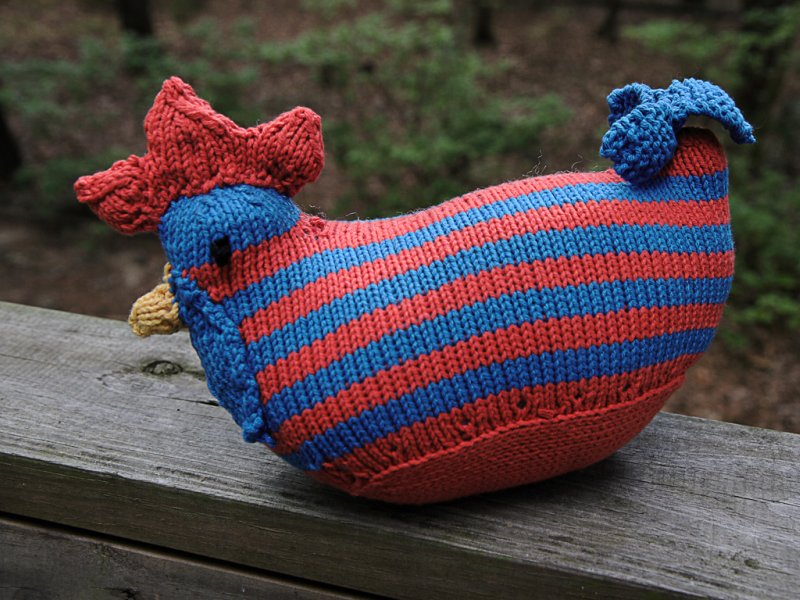 The yarn was Cotton Ease, which may or may not be 100% cotton, but it was in the stash and it wasn’t going to be a huge loss if I completely screwed up the whole thing.

The pattern you may recognize. It’s an adaptation of the classic Blue Sky Alpacas Knit Chickens by Susan B. Anderson.

There are parts of the pattern (as it’s written) that I didn’t really understand. (Read: a few parts that I just didn’t like.) Specifically I re-engineered the crown/comb as one piece because… well, mainly because I don’t like sewing so awfully much. (Originally I did it the way it was written, but I didn’t like the results I got, so that went over the side.) It’s a bit bigger than I’d have liked, but I was guesstimating what I needed based on the size of the head.

Apparently this is a [B][I]hugely[/I][/B] popular pattern. (Probably because you don’t find all that many patterns for knitted chickens.) But I’ve seen dozens of variations on it (besides my own). Unfortunately, it’s not a free pattern, or even an especially cheap one ($9). But it’s so ubiquitous that you can probably find someone who has it that you can borrow from.

I used it as a learning aid, because it used a lot of techniques I didn’t know yet and if I screwed it up… chickens don’t care! That said I [I]wouldn’t[/I] recommend diving into it unless you have some proficiency in basic shaping techniques and at least a little bit of experience in circular knitting. It’s a good way to expand your skill set, but definitely [I]not[/I] a “learn-the-basics” pattern.

For instance, this is all the stuff I learned that I either didn’t know or didn’t know very well before my first chicken:
[ul]
[li]Picking up stitches (I’d sewn bits together before, but this is different)
[/li][li]Small-diameter circular work (Magic Loop in my case, but the pattern specifies DPNs. Use what works for you; it comes out the same either way.)
[/li][li]Making stripes in the round (actually, I’m not sure I’d done color changes of any kind before this, but I’m not sure)
[/li][B]Also[/B], in the process of making this thing I found a way to get rid of the “step” you get when doing stripes in the round. Unfortunately, I can’t remember now where I found it or how to do it, so if anybody has a how-to on that one I’d appreciate it!
[li]Kitchener stitch (including how to tighten up Kitchener stitch that ended up looking like the laces in a football)
[/li][/ul]

Up to that point my experience had been … a scarf, a hat, the back of a sweater (which [I]still[/I] isn’t finished) and a selection of …ahem… “novelty items” that I won’t discuss here. (Long story) In other words, not a lot but enough to get some basic stuff figured out. 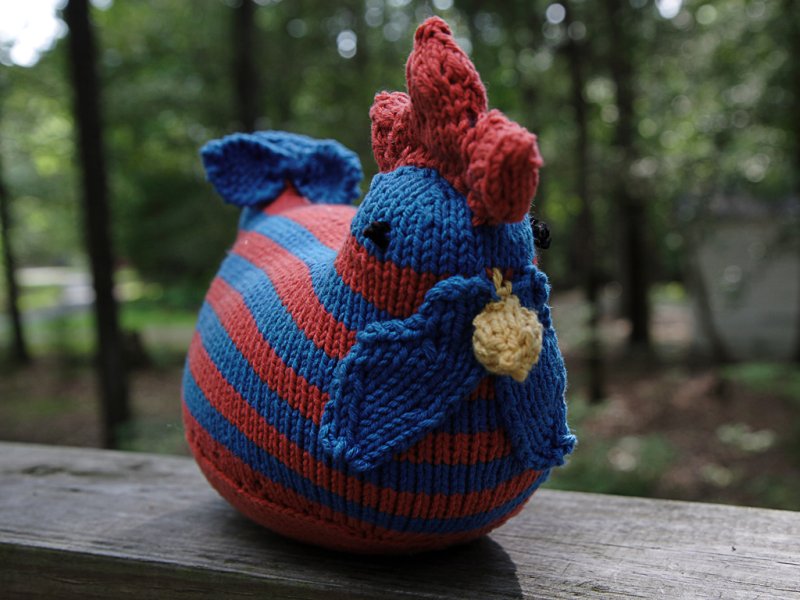 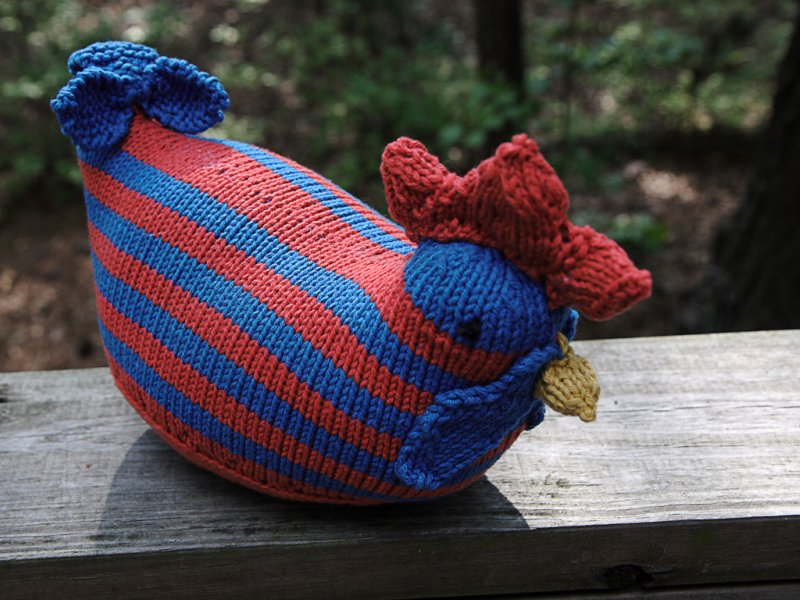 That chicken certainly has character.

Very cute! You did a great job!

Not a breed I recognize, but then I am not a chicken expert. :lol: I love the comb, very perky.

What a cute chicken!

Ok, wow! Both chickens are fabulous and it’s hard to choose between them. They’re all that I dreamed they would be. Thanks so much for the photos.