[FONT=“Georgia”][B][I][COLOR=“Navy”]Hey All,
These questions are so newbie is untrue!

eep - many questions. let’s have a go an ansering them.

Knitting in the round can be done using a few different methods including using circular needles. The idea is that instead of being flat each end of your cast on sticthes are joined to each other to form a tube that you go around and around with.
Other methods include DPNs (double pointed needles) 2 circulars and magic loop, all of which are particularly good for things of a small circumfrence.

Which goes on to the second question. with circular needles in order to get a complete tube, the number of cast on stitches has to be able to go all the way around the circular needles without becoming over stretched. since the tube needed for gloves would be quite small, they would not fit onto a circular needle. DPN’s 2 circulars and Magic Loop, can be used instead. DPNs mimic a circle by using 3 or 4 short straight needles (with a point at each end) to creat a ring. you use another needle to knit the sticthes. 2 circulars work by dividing a tube of knitting into two halves which are held separatly and are knit one half at a time (sort off, it’s a little hard to explain.

The are videos of all of these techniques on this website.

The numbers in the pattern you ask about look like somthing known as guage. This is the numebr of stitches (or rows) per inch that you get with a particualr size yarn and needles. Different patterns cal for different gauges, and it is easiest to measure over a swatch of 4 inches (10cm). thin yarn on small needles will give you a small gauge, or lots of sticthes per inch and thick yarn on large needles wil give a bigger gauge, or few stitches per inch. This directly relatex to howmany sticthes are cast on to get different sized things.
For patterns i would look at www.knittingpatterncentral.com or www.knitty.com

And i’m sorry i don’t know the yarn so can’t help you with that. Although it is a worsted weight which is a medium to thick yarn so should be useful for a number of fingerless glove patterns.

[FONT=“Georgia”][B][I][COLOR=“Navy”]Hey All,
Tarrentella - Thankyou for your swift response. That is really helpful, and put me at ease a bit more.

Glove patterns: Can you just do a lacey tube for proper fingerless gloves on circulars?

Yes, you could do a lacy tube. For simplicity you could just add a large button hole for the thumb. To do that you just cast off x number of stitches…maybe 5 or 6 and then knit around and cast on 5 or 6 and keep going.

[FONT=“Georgia”][B][I][COLOR=“Navy”]Hey All,
Jan -This is really great. Could you send me a pattern link of a sample tube thing, or provide me with a row by row of what you mean by the decrease? Could you knit these with circulars?
~Phoenix~
[/COLOR][/I][/B][/FONT]

[FONT=“Georgia”][B][I][COLOR=“Navy”]Hey All,
Newbie Question: Can someone please suggest me a pretty lace pattern… that can be put in a sample of a triangle shape, and a half moon shape?
~Phoenix~
[/COLOR][/I][/B][/FONT]

Here’s a pretty simple one, w/a lace pattern in it already: 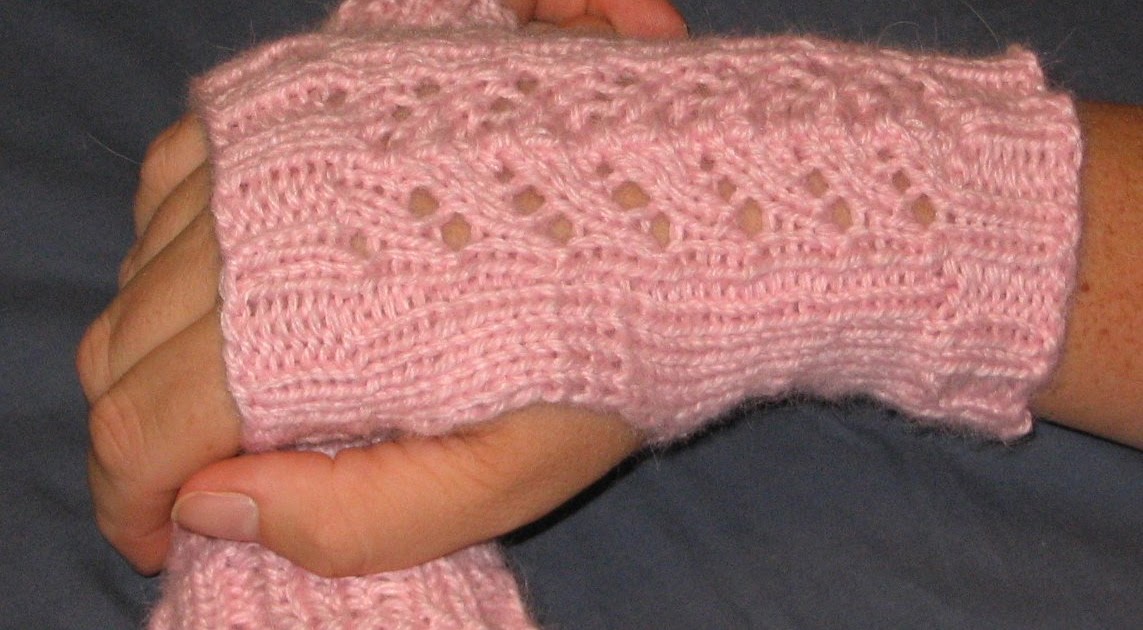 FISHTAIL WRIST WARMERS Comfy, cute, what more do you want? Materials: I used 1 skein (109 yards) of Wings, by Classic Elite, but any w...

Here are some more that just have a slit for the thumb: just for April : Edited to add: I'm adding some notes at the end of the pattern to allow you to customise to different yarns, lengths, g... 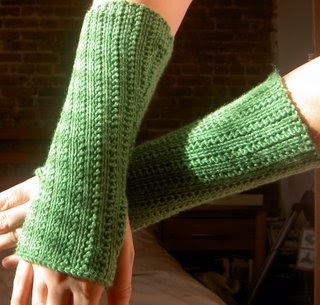 EDIT: I have made a lot of corrections for this pattern, I hope that will solve any issues people have been experiencing. This is a long ...


You can probably find a lace pattern you like that will fit into the number of stitches, and just replace it.
PHOENIXMOON August 23, 2016, 12:40pm #8

Newbie Question: When knitting wrist warmers/fingerless gloves, can you use only one pair of needles (flat or circular) or do you need more than one set/double pointed needles?
~Phoenix~
[/COLOR][/I][/B][/FONT]

They are usually done circular, which would require any one of these methods: 2 circ needles, magic loop, dbl pts or maybe even modified magic loop.

But some patterns will be written for flat knitting and seamed.

I flipped thru the links here: http://www.knittingpatterncentral.com/directory/mittens_gloves.php
to find the patterns I listed. I saw some of them were written for flat, can’t remember if I listed them above or not.

But you can also take any of the ones written for circular, just knit them flat, maybe add 1 or 2 stitchs for the seam and then sew up the seam when done. You can put the thumb hole along the seam.

So, yes, just knit a square or rectangle that fits around your arm/hand and seam one side. instant fingerless mitts!

[FONT=“Georgia”][B][I][COLOR=“Navy”]Hey All,
Another newbie question:
I want to make a project using three colours of yarn, to use up my yarn stash. I havent started it yet (other project has priority atm, but nearly finished). However, I dont have much of these yarns to make the item I want, I cant really substitute it or shorten the project. And this project is designed to match another knitted item. It also is a gift (surprise gift!) for someone. Any suggestions?
~Phoenix~
[/COLOR][/I][/B][/FONT]