I learned to knit from an older European woman who was a neighbor and so I knit Continental style. In addition, I hold the left needle under my arm and knit “off” that needle. I’ve tried to knit the other way but to no avail. Because circular needles are so short I can’t use them because I can’t hold the left one under my arm. I’ve a beautiful cowl pattern that I want to make but the pattern is written for circular needles. So I began looking around and found this site. I’m hoping to find out how to modify the pattern to knit with straight needles instead.

Hi and welcome!
What pattern are you going to use?
In general, the second row knit in the round will change from a knit row to a purl row for flat knitting. If it’s purled in the round, it would change to a knit row when knit flat. If there’s a knit/purl stitch pattern on row 2 in the round that too would change. Knits would be changed to purls and purl sts to knits.
You may also need to add an extra stitch or two to the ends to use for seaming.
Easier to think about with a pattern in mind, however.

Hi, and thanks! The pattern Malabrigo Rios “Greenway;” I copied the first few lines hoping it will help. It confuses me because there are two row 1’s and two row 2’s, etc. As you can see the DC (Paris Nights) outlines the cowl and appears in between the LC (Fresco y seco).

Very pretty! I love working with Malabrigo Rios.
Actually, according to the pattern notes, this is worked flat, then seamed. The trick may be in finding a long enough needle to work this on as you need an open ended needle. The pattern recommends a circular because you can then slide the sts from one end to the other. A very long dpn would work but I’ve not seen such long ones (225sts).

When I read the instructions I understood it to be worked in the round in order to avoid seaming.

Hmm, I wonder if the pattern is different from the notes on the page linked above?

“Looped over or draping long, this brioche-rib cowl looks stunning in Malbrigo’s Rios. Rios is a hand-dyed yarn in amazing colors and this cowl takes two contrasting colors to create a reversible piece. It is superwash Merino, so it is machine washable, soft, and warm. The cowl is worked flat and then sewn into a circle. The technique is challenging, with two rows worked, one color each row, to make a single row of finished knitting and the pattern repeats four finished rows throughout. Stitches are picked up and worked at the edge for the easy edging. The cowl measures 6.5” wide x 48" around. …"

So I may have misunderstood. I saw it call for circular needles, then give 2 each of the rows and so assumed it was worked in a tube. I also saw a comment somewhere about how nice it was to work this way because it avoided having to seam the long edges together at the end. Perhaps I can go back and find that comment.

The first few lines of the pattern that you quoted indicate that the work is either slid to the opposite end of the needle or turned which are both directions for knitting flat.
I wonder if the rest of the directions continue that way? Funny about the comment.
There are no projects yet of Ravelry although the tags also indicate knit flat. 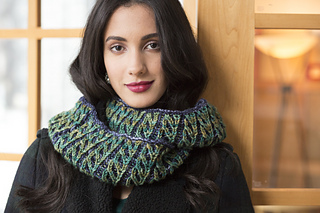 Pattern is reversible and can be worn on either side.