I’ve been knitting hats on circular needles. Recently I tried doing stripes. My question is - how do I properly carry the yarn to avoid cutting it? Example - I do 3 rows red, 3 rows white, 3 rows red,etc. When I change from red to white, I don’t want to cut the red yarn. When I carry it up by catching the yarn with the white thread, it shows through. Is there any way to avoid this and make it look more professional?

Personally if I was just going 3 rows I would probably just bring it up from where it was last and not do anything special. It will make a little strand from point A to point B, but not any worse than a strand in stranded knitting.

I learned a little trick last fall that worked pretty well, and I’ll will try to explain it. If you have to carry the yarn farther than you think looks good just to “bring it on up”, try this:

Lets say your two colors are red and white. You are knitting with the red and have left the white two inches down and want to use it again. Cut the white yarn (leave a tail to work in later). Now two to two and a half inches before you get to the place where you need to switch to white, lay the white yarn behind the needle (up close to it) so that the tail end is off to the right and the part going to the skein is off to the left. Now resume knitting with the red, catching the white in as you go. Here is how you do that:

Then begin using the white yarn. If you are not going to use the red yarn for a ways, lay the red yarn off to the left along side the needle and work under and over [U]it[/U] until it is well caught in, then cut it off. You keep leap frogging the yarns, cutting them and stranding them in and out as you need them.

Some yarns may show through a little (this may be a problem with very contrasting colors like red and white. :sad:) when you catch them in, but it will work great for a lot of yarns. When you are all done you cut the tails of yarn off that you have stranded in and out just like you would handle any tail that you have already worked in.

Give this a try. It might work for you, but it might be the same sort of problem you are finding trying to carry the color up as you have been trying to do. But I found this worked better. If the “hidden” color shows, try pulling on its tail and that might help. Really. If it doesn’t work for your particular yarns remember it to try on another occasion. I found it useful. Let me know if it works for you. 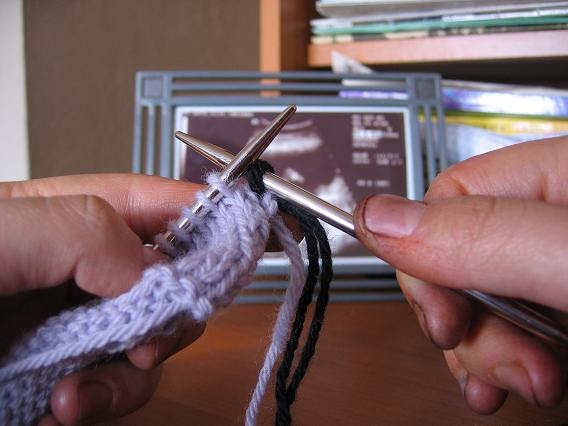 How to weave in ends while knitting (VERY PIC INTENSIVE)

Okay! Here is where I attempt to show you the coolest.thing.ever that I learned from Jennifer "JP" Pett-Ridge during my colorwork class at...

If your colours are showing through when you catch, they may do so when you lock in the ends this way, however, as this weaving them in can show through (but not always). This way can also be a bit tight so do not pull up the locked-in strand: stretch the knitting to loosen the locked-in strand through the row.
I would just leave the red though, and bring it straight up when you want it later, I don’t think it will show, but if it does, you may need to weave in white tails on white areas, and " for the red.

have you used the “jogless jog”? it’s great for preventing that hole you get when you switch colors. the pictures may not make any sense at first (well, they didn’t to me), but just read it through. it’ll click.