Ok, first off let me say I love my husband dearly, but, he can be such a pain in the butt! :teehee:

Ugh…Ok, he is the pickiest eater I have EVER known! I’m trying to think of something I can cook for Thanksgiving that he will eat…My family all gets together at my mom and dad’s house and my sister, sister in law, and I each bring a dish…I used to bring green bean casserole, but, he won’t eat it, then, last year, I made a really good potato casserole (the kind with the corn flakes) that he also refused to eat…He won’t eat anything that contains potatoes (on very rare occasions he’ll eat a couple french fries or tater tots, but that’s it), he doesn’t like stuffing or gravy, he doesn’t like anything with the word “casserole” in it, and there are other things he refuses to eat just because he thinks it “looks gross”…GAH!

We have a huge variety of food at Thanksgiving but he’s so picky he eats hardly any of it! We have corn, mashed potatoes and gravy (plus a delicious vegetarian gravy my dad makes), stuffing (my dad makes a wonderful vegetarian stuffing as well), cauliflower with cheese, a vegetable tray, salad, rolls, cranberry sauce, my mom makes a ham for the meat eaters…I’m sure there’s more but I can’t think of the rest…lol…Anyway, all hubby will eat is the salad, rolls, corn, and cauliflower with cheese. I want to bring something he will eat and every time I ask him what he’d like me to make, his response is, “I don’t know.” :hair:

I have been looking at all sorts of vegetarian recipe sites for ideas but most of what I have found is potato based or casseroles!

My mom and I were joking that if I found a casserole that I think hubby might like I’d tell him it was called a “combination” instead of casserole. :teehee:

Anyway, I was wondering if anyone has any vegetarian (or simply non-meat) Thanksgiving type recipes they wouldn’t mind sharing that don’t contain potatoes and aren’t casseroles…lol…It doesn’t have to be an entree, just like a side dish or appetizer…I’m driving myself crazy trying to find something and I’m about ready to give up and tell hubby too damn bad…lol

We always have candied sweet potatoes. Will he eat those?

Unfortunately, no, being potatoes…I swear, he’s impossible! Thank you, though!

Is he complaining that there isn’t enough for him to eat? If not, make what you want and let him enjoy what he eats. If he is, tell him to grow up. Even my kids know they have to at least try something before telling me they don’t like it and won’t eat it.

Really, at some point you are going to let him own his own food issues. Most of the “food challenged” people I know have learned that they have to deal with the fact that not everyone eats the way they do or is willing to cater to them all the time.

Hope that is not too blunt!

No, he doesn’t complain about there not being enough, he just hardly eats anything then later, once we’re home, complains about being hungry…lol…Thing is, with him, he is hands down the most stubborn person I have ever met…I mean I am stubborn as can be but no where near as bad as he is! He just flat out refuses to try anything he doesn’t like ('cause he didn’t like it when he was a kid…I think possibly the foods that were cooked for him when he was a child were less than stellar and that has led him to refuse to try anyone else’s version), or anything he thinks looks gross…My kids aren’t even as picky as their father!

As far as making something else he will eat for Thanksgiving, it would of course be for everyone, not just him, but I wanted to make something he would eat, to try to be nice…lol…My kindness is, however, wearing thin…:teehee:

This is my FAVORITE Vegatarian THANKSGIVING Recipie. I was a vegatarian for many years (I eat chicken now) and made this every year to replace the turkey.

let stand in pan for about 15 minutes before turning out

Your hubby and I would have similar items on our plates. Should I share the time I had green beans and pumpkin pie for Thanksgiving dinner? As a long-time vegetarian who generally dislikes Thanksgiving foods, here’s my suggestion.

The best Thanksgiving dish I had that I enjoyed for the FOOD as opposed to the company was the rice stuffing in the Tofurkey turkey dinner package. The Tofurkey itself I could take or leave, but the stuffing was really good. And I detest the traditional bread stuffing. (Apparently, the tofurkey stuffing they make now has both bread and rice. I’m very disappointed.)

Unfortunately, I haven’t had a whole lot of luck finding a recipe for it. Here’s a possibility, though (sub vegetable broth, of course, and I’d probably leave out the mushrooms since I only eat those if I can’t tell they’re in the dish - broccoli makes a good colorful substitute): 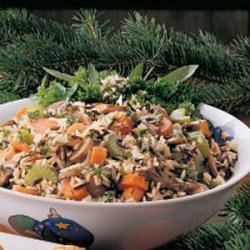 'Although it uses many of the same ingredients found in typical stuffings, my family enjoys this version because the wild rice provides a different texture,' shares Edie DeSpain of Logan, Utah.

I’m sometimes tempted to go completely un-traditional and make a risotto (yummy) or lasagna or enchiladas or something like that. I am never sure whether traditional foods or the idea of FEASTING should win out. Personally, I think a feasting holiday where I fast really stinks.

Here is one more (I had to go find it). I use a lot of ground nuts for Holiday meals (too lazy the rest of the year).

from into 1 inch balls, arrange on a well greased baking sheet and bake for 25 minutes at 180-200degrees until golden brown.

HMMM - I am at work and my recipes are at home…I am not a white tater fan or casserole fan either (not a fan of “one pot dinners” and still have nightmares about my mothers tuna noodle dinner.
As for the picky hubby, what about some sort of lentil salad, rice/lentil pilaf, couscous salad or beans and pasta salad.

Thank you, GinnyG and cftwo, those recipes sound delicious!! Vaknitter, I knew I was forgetting another of hubby’s food no-no’s…BEANS!! LOL!! Yep, he won’t eat anything with any kind of beans either! :wall:

In that case my hubby would starve to death

Yeah, I’m about to that point…LOL!

Okay - I know this isn’t exactly on the topic, but…

Does he have trouble digesting more complex starches? If he won’t eat potatoes & beans, maybe there is a reason - that even HE is not aware of - and just “senses” as general dislike :Shrug:

As for mixtures and combination foods - I have heard of other “picky eaters” not liking their foods touching, not liking too many ingredients in a dish. Perhaps their sensation of taste becomes overwhelmed by too many distinct flavors? :Shrug:

I too, used to stuff the most beautiful pumpkin or squash I could find with wild rice, mushrooms, lentils, nuts, etc. as a centerpiece (presentation) dish for a holiday meal. That won’t work for your picky eater, but… for everyone else, perhaps.

Okay, I’m chiming out now and letting the rest of you get back to the real discussion.

OMG, MoniDew, funny you mention the people who don’t like food touching, that is TOTALLY him!! He’ll get separate plates or bowls for any food that may possibly touch anything else, such as corn or salad or something!! And that taste sensation overload, you could be on to something, not long ago he was going on about liking bland food! :ick: :teehee: I just can’t go there, my mom always, always seasons the food she cooks and that’s what I grew up on so I like FLAVOR!

This is a called Broccoli Casserole but it is more like filling cheesy broccoli. So you can call it what ever you want.:teehee: It is one of my family’s favorite dishes. It’s definitely not a healthy side dish but soo good.
1 big bag frozen cut broccoli ( 16 oz I think)
1 sleeve Ritz Crackers crushed
8 oz Velveeta cubed
1 stick butter melted

Layer broccoli, cheese, and crackers in 1 qt casserole dish. Cover with melted butter. Bake 30 mins or until bubbly at 350.

Demonica, All I can say is “It’s a good thing you love him!”

My DH used to be picky. He thought he didn’t like cheese. I snuck it into food for years, and he never knew. Now, he openly eats cheese, but not all kinds. He used to tell me to lie to him about ingredients if I thought he wouldn’t like it.

Thank goodness my DH isn’t a picky eater! Now, DS on the other hand…

Demonica - can you give us an idea of what he WILL eat? It may be easier for us to come up with suggestions for you! Though I am not a vegetarian, DD’s roommate is and we are always trying new things when we have her for dinner.

Ginny - thanks for posting those recipes - they sound yummy! I’ve printed them to try for DD’s roomie

How about roasted or sauteed leeks? Maybe cooked in olive oil with some garlic and mushrooms? I’ve even mixed that into brown rice that I had cooked in vegetable broth instead of water.

Or how about baked spaghetti squash with parm cheese?
Or brussel sprouts (buy frozen) that have been steamed or sauteed (yummy) with butter or olive oil spread? Do you eat butter?

I [I]love[/I] butternut squash ravioli with brown butter sage sauce! Not only is it delicious, but I can buy the ravioli and only have to worry about making the sauce

If your hubby doesn’t like butternut squash, then you can definitely switch it up by using sweet squash or even pumpkin to stuff the ravioli. This recipe should yield enough sauce for 4-6 servings.

Melt the butter in a large sautee pan (about med/low heat). Add the sage leaves and continue cooking until the butter turns brown, being careful not to burn it. I like for it to have a med amber color. Place the pasta on individual plates and spoon some of the sauce (and sage leaves!) over each of the servings. Sprinkle some Parmigiano-Reggiano cheese on top and enjoy!