I’m ready to start on the Tree of Life afghan (Lion Brand-full size version) because I’ve really been working on my stitches and feel I’m ready to tackle it because I believe I can learn a lot from this pattern. It might be too ambitious, but I’d like to try. I’m still not adept at gauging proper needles for my projects though. The pattern calls for a size 8 or whatever size needed for gauge. For those familiar with this pattern, what length should the straight needles be? And is it better to knit this pattern circularly? I understand you would do the opposite of the graphs/pattern and go backwards for every written WS row if you stay working RS only while knitting circularly. If circular needles would be a plus, what length cable would be best?

P.S.: I’ve searched and searched but I’m running into a problem when I add “needle” to “Tree of Life” in my search, it hits on a lot of people’s signatures instead of post content. When I google that phrase, I come up with a million different pattern postings, lol.

I don’t see how I could fit 180 cast on stitches on a straight need, so I decided to go with a circular needle. I’m going to use a 24" cable per a chart I was able to find that listed the suggested stitch count range per length of cable. Fingers crossed it works out well. This is the first time I’ll be using circular needles in place of pattern called for straight needles so I’ll be happy to learn the process because i prefer knitting on circular needles.

The size of your needle depends on both your gauge and the yarn weight. If you’re using the yarn in the pattern which is a worsted weight you would use a 7 or 8 most likely. You need to do a swatch to figure that out.

As for type of needle…no way you could do this on straight needles. You have to cast on 180 stitches. I personally would probably use a 58-60" cable. 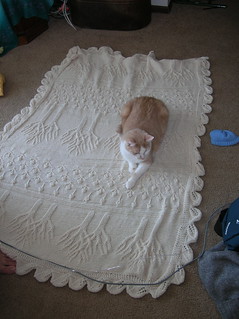 Also available as “Trees Breeze” from

24" will never work. The chart does show one section, but as far as I can tell you do multiple sections across the pattern. So if it’s a tree you’ll do 4 trees with dividing stitches.

Thanks for the reply! I settled on a size 8 needle after knitting a 4x4 swatch. I tried size 7 first, but had to go up to size 8. I just wanted sure about the length of the cable to use for that many stitches since I’ve never done anything this large. It’s my first afghan. I don’t think I have a cable longer than 40", so it looks like I’ll be going to my LYS. Thanks for the tip about Raverly!

A 40" might work, but with a huge afghan on it it might be tight. I would give it a try though. Or better yet figure it out from your swatch.

Just to be sure, you wrote:
" And is it better to knit this pattern circularly? I understand you would do the opposite of the graphs/pattern and go backwards for every written WS row if you stay working RS only while knitting circularly."
Even though you’re using circular needles, you’ll still be knitting back and forth (knitting flat). Don’t connect your stitches to work in the round.

Thank you. Once I did the cast-on stitches, it dawned on me that I’m not actually going to be knitting circularly because I won’t be joining the ends, just knitting like normal rather than only working one side.

This is my first time using circular’s for flat knitting and my first afghan so I was very confused last night. Plus I had a fur kid emergency the night before and had little sleep. I’ve learned that knitting when tired is not the best idea. I finished a pair of socks yesterday and realized today that I messed up one of the repeats on the last sock. I should’ve forgone all knitting yesterday.

I am excited about this afghan though. I think I’m going to learn a lot from this pattern and there’s a lot of information out there about it from others who have done.

Thanks for everyone’s replies

I’ve cast-on using the 40" cable and I plan on picking up another longer cable. Even if I don’t use it, it will likely come in handy in the future. My hardest challenge with knitting seems to be connecting the dots when doing something different than the pattern says (for instance, using circular needles on a sock pattern, rather than the DPN’s the pattern calls for), so I think I over think it a lot of times. I’m hoping with more practice, I can get out of that habit.