am confused how how to start knitting socks. do you have to measure your feet or calves before you start?

For your first socks I would find a pattern that sounds like it fits (some give shoe size) and stick to it. If they don’t fit give them to someone they will. After that you’ll have a better idea the numbers involved.

For making your own pattern I would say calves and widest spot between ankles and heel would be handy as would knowing your gauge with the planned yarn and needles and how much stretch the yarn will give. About 40lbs ago getting over my heels was my spot. Now calves can get tight.
Since I’m not a fan of swatches and I knit 2 at once (which changes gauge and I really don’t want to double knit swatches) I knit about an inch and try it on to make sure it will stretch over my heel and not be too tight on calf.

Here’s some more information on sock measurements in addition to Mike’s good advice:

How to Measure Your Foot for Knitting Socks

Have you ever knit a sock that fell down or one that was too tight? If you learn how to measure your foot for socks, this will never happen again!

Also a good reference for how to knit socks, Silver’s Sock Class
http://www.cometosilver.com/socks/
And of course, the wonderful Liat Gat: 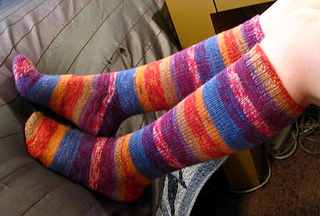 Here is a free basic pattern for beginner socks, one- or two-at a time, using Magic Loop. It’s the one I use in all my classes, and I always get great results.

Silver’s is a great place to get started. Glad it’s still around. A lot of my old knitting links are dead now.

Definitely use a pattern for your first few pairs of socks. They can be knit top down or toe up, you can do a heel flap, short row heel or afterthought heel and variations on all those and also there are different types of toes. Many are made with fingering weight yarn and tiny needles, but a pair with worsted weight is a good way to learn an can be used for house socks. You can use magic loop, DPN or 2 circular needles. SO MANY CHOICES! Everyone has their favorites after they learn how. You’ll learn how many to cast on from patterns. Here’s another site for learning. I started with DPN then went to 2 circs and now only use magic loop. Personal choices.
http://www.cometosilver.com/socks/

how did you get started in knitting? don’t know of too many guys that knit.

also thank you for your suggestions about socks.

Agoraphobia and panic disorder. Couldn’t get off the couch, sitting on the couch doing nothing wasn’t doing me any good.

Mike, I’m glad you thought to take up knitting and that you joined the forum.

Thanks. Yarn work was suggested on an anxiety forum. This is where I learned. Sister taught me crochet on the phone but I don’t know anyone who knits.