I want to make these booties:

I need some help with the straps. I’ll be making the small size but only using one color. I just totally don’t understand what I will be doing. How can I cast on new stitches with a scrap piece? Then I do rows 25-28 again?? How is that done? I feel stupid because she has really good pictures but they don’t help me at all.

Can anyone help me? I made a really cute hat for a friend’s new baby and I think I have enough yarn left over to make these. Thanks a bunch!

well row 24 has you binding off stitches in the middle dividing your work and leaving you with 10 stitches on either side.

im not 100% sure how you do the cast on, but adding in the extra strand meens you can use a long tail cast on when you already have stitche son the needle, ordinarilly you would have to use a knitted or backward loop.
once you have 20 stitches on your needle (10 knitted and 10 more cast on you work rows 26 to 28.

you will then have 10 stitches left on your needle which you havnt worked since row 24. You rejoin your yarn and work from row 25 again. this creates to distinct sides for the crossover straps.

ok, so how do I join the yarn? Just tie a knot and then weave it in later? I have been knitting long enough that I should know this but it’s confusing to me. It seems like there should be a better way to do this but maybe there isn’t.

So I have sts on two sodes of the needle and work them separately? One side first and then the other, casting on 10 extra sts on either side? Is the 8" tail at the begining, at the knot? How do I connect the new yarn??

This pattern is a little tricky to follow it seems to me. I went and made a miniture bootie and the straps to see what was going on. The pattern says on row 24 to k10, BO21 and K10. Then on row 25 you are turning right from the end of your last knit 10 and row 25 starts off with knit those 10 again and then CO the 10. Use the yarn you are knitting with as the one strand for the long tail cast on and introduce another strand for the thumb part. (this felt weird but I managed it) I didn’t join it in any way really, I just held the new yarn up where I could use it to cast on. After you have the cast on done you can cut that new strand of yarn to 8" and knit the rows and BO with the orginal yarn.

You want to end up with the two straps coming off pointing out into the open area where you did the 21 bound off stitches. That first strap is the right one as the bootie is worn. Now you do the left one.

You already have the 10 stitches on the needle. You need to add the new CO stitches to the right, off to the side where the opening from the BO 21 is. I just used a new yarn and using a new needle made a slip knot and cast on 9 more for a total of 10. It says something about yarn there at the beginning of the left strap, like you already have a yarn there. I don’t think I had one. I cast them on a new needle and then slipped those over to the right of the ones already on the (left) needle and then I was ready to do like it says and K10. (The yarn I used to cast on was there to knit with on the next stitches.) Again I didn’t join them together, they were just sitting next to each other but when you do the next row and knit across all of the 20 they become joined.

I don’t know if this is what the gal intended or if I did it right, but it worked. Maybe Sophie will have a better plan. Good luck.

MerigoldinWA, you have saved me twice now!!! Thanks so much!

I stopped at the point where I have to bind off the middle stitches and I’m really glad now. I was going to plow ahead but I think the way you described is much better.

I’ll finish them tonight, after my little ones are in bed, and send you a picture. They look great to far and now I know I can finish them!!

Woah, I have a tiny problem, I only have one ball of yarn. When do I cut???

Can I just M1 10 times instead of using long tail cast on? I can"t really cut my yarn…

Glad someone else was confused by those straps. I have been trying all day ans searching all day to figure out how to cast on those ten stitches. Hopefully I will be able to do what poster said and just hold the two strands. Also doing in one color so just cut from end of yarn a long piece to use. Can’t wait to see them on my baby girl. Also did you get it. Let’s see them!

I didn’t use the second strand of yarn and just did backward loop cast on. On the second strap i had to join the yarn, because there was no available loose end. Nothing horrible happened with not doing the longtail CO.

but wasn’t there alot of slack in the new st when you went back to knit them? I tried to do backward loop and that’s what happened

Oh, those straps really gave me some trouble!!! I think I did cut the yarn and then I CO with a new piece and it joined itself when I knit across. There were so many ends to weave in!!! YUCK! They turned out ok though!

but wasn’t there alot of slack in the new st when you went back to knit them? I tried to do backward loop and that’s what happened

I did it really tight. You can see them here, if you’re on Ravelry.

Oh, those straps really gave me some trouble!!! I think I did cut the yarn and then I CO with a new piece and it joined itself when I knit across. There were so many ends to weave in!!! YUCK! They turned out ok though!

They look great! And yes, there are lots of ends to weave in, but they turn out so cute, that you can’t resist!

I have been trying to download the pattern for the booties, but for some reason I always get an error message. Does anyone has the pattern already downloaded from their website that could email it to me?
I am expecting my first grandchild and would love to make her a pair!
Thank you in advance.
Gladys

I have been trying to download the pattern for the booties, but for some reason I always get an error message. Does anyone has the pattern already downloaded from their website that could email it to me?
I am expecting my first grandchild and would love to make her a pair!
Thank you in advance.
Gladys

This post is almost 7 yrs old so that link is ancient. Here’s where you can get them. 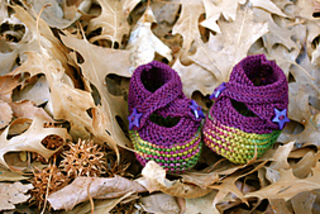