Pattern is different than picture

I’m just wondering how common this issue is because it’s a very frustrating issue. I ordered a kit in a bag, so to speak, for what I thought was a beautiful sweater. The kit included all needed yarn and the pattern. The pictures on the website are really nice and the pictures that are included in the kit are really nice. I’ve been working on it for several weeks. The sweater is not knit in the round, it’s a front & back panel and two arms that will need to be seamed. Marpha Sweater

The pictures show the top V and it’s border go past the shoulders and slouch down the upper part of the arms. The pictures also show a nice ribbed collar on the sweater. As I was knitting and got to the top of the back & front panels of the pattern, I noticed the pattern has a staggered cast-off for the neckline with no ribbing. I thought maybe later on in the pattern it would give instructions for picking up stitches and adding ribbing, not thinking about the fact that wouldn’t make sense with a staggered cast-off (by staggered I mean in the middle of the work, cast off 3, on the next knit round, cast off 2, etc)

I also realized that the V in the pattern doesn’t go across the top of the arms. The darker color of the inside of the V and border around it stays on the front & back of the body, and shoulder line ends like it would in a normal, non-slouchy, sweater, not stretching down the arms at all. It’s a little hard to explain in words, but in the pictures, you can see the shoulder line/the top of the V, curves down across the upper arms, but the pattern doesn’t do that. The front & back panels in the pattern don’t slouch, they end straight up & down, as does the darker V shape & it’s border, where the shoulder meets the arm.

This changes the whole style of the sweater because it changes it from a slouchy, oversized looking sweater into a plain jane sweater with no style. I put everything down and read through the complete pattern (which I did at the beginning but didn’t notice the differences at the time) and there is no explanation for any of the changes. The arms are also about 25 rows too short, each. Looking at the pictures, the arms in the pattern would be the right size IF the front and back panel included the elongated shoulders that’s on the sweaters in the pictures. I checked Ravelry and did a google search & found that others who’ve knit the pattern have stated they added the ribbed collar because it looked better and they had to lengthen the arms. The pictures I’ve found posted by others are knitted from the same pattern I was sent, not from the sweater that was on the picture, so it doesn’t appear that they are sending the pattern for the sweater in the pictures to anyone, but are sending an altered pattern. I’ve sent the company an email asking about it and I’m waiting for a response, but at this point the sweaters almost done.

Honestly, to spend weeks working on something that wasn’t cheap only to find out before I finish that it’s not something I would wear (but the picture of what I ordered IS something I would wear) is frustrating. I don’t really want to finish now because most of what’s left is just seaming and I know won’t wear the sweater.

Is this a common issue? Is there any advice on what to look for on patterns before starting to avoid this type of situation? Could it be that kits are thrown together as an all-in-one solution, so they are more likely to end up with the knitter being more than satisfied? I’ve only been knitting for a few years and this is the first time I’ve ran into this, but this is only my third sweater. My mind doesn’t work in a manner where I can read over patterns beforehand and have elements automatically jump out at me that are different from what I’m expecting. I usually just read over to make sure I have a full understanding of the techniques involved.

This picture from the pattern website looks more like what you’re describing. I can’t really comment on how much a pattern is likely to differ from a featured photo. Maybe the one you expected was done in a larger size to be wider in the shoulders and may have more modifications. I think that site will never get money from me. It is at best misleading. 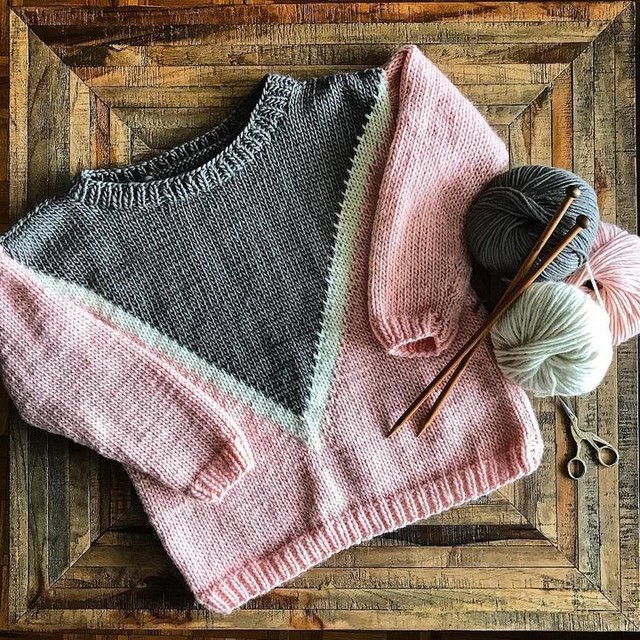 I agree with GG about sizing. It may be that the model is wearing an oversize version with lots of positive ease. There’s really no way to judge that without detailed measurements. Some patterns give you a look at the schematics before you buy. That is certainly a good guide to the size of all the pieces. I don’t see any for this pattern on Ravelry or on the website however.

Are you getting the gauge given for the pattern? The wool gauge is 12sts/4" on US11 needles but the pattern might not be the same.

It wouldn’t be unusual to pick up and knit a ribbed collar on the kind of stepped bind off that you’re describing.

I’d try writing again to the kit designer or source. Usually simple photo, one without scarves or belts is a good guide to the finished sweater.

Yes, GrumpyGramma! That pic’s exactly what I’m describing, except for the ribbed collar. It’s not included in the pattern either. If I finish the sweater and add a ribbed collar, that is what it will look like. It’s not that there’s anything inherently wrong with that sweater, but it’s not the look they’re selling and even that sweater is nicer than the pattern because it has the nice finished ribbed collar. It’s a big difference. In the photos they have, the white and grey V go down the arm, ending in a position that is even with the lower breast line of the model. Essentially, the arm seam is even with the lower breast line.

Surprisingly, my gauge is spot on with this project, which is rare and I love oversized sweaters so I knit the XL, which is the largest size in the pattern. Something I just noticed is the pattern book has a simple drawing in it of a person with their arms out, wearing the sweater. It shows the sweater as it really is in the pattern, with narrow shoulders, not how it is on the model, with slouchy shoulders, (except it includes a ribbed collar). I really should’ve searched for other finished projects that have been posted online before I bought the kit. I see now that everyone else who finished this sweater and posted pictures has a finished sweater that looks just like mine, rather than the pics on the companies website.

I’ll send another email to them, but I think my days of buying from them are done, which is a shame because I really like their yarn, but don’t want to support that type of advertising. I’m disappointed I have a sweater that was $100+ that I won’t wear, but I’m more disappointed that I spent the time on it without learning any new techniques. Thanks for everyone’s thoughts. It puts my mind at ease to not hear anyone say this is a common occurrence!

I heard back from the website. The ribbed collar is included in the pattern. It’s at the end of the join section. I must’ve skipped over it since I always follow my own join technique, so that was my mistake for missing it. I’m assuming the other people who’ve posted about needing to add the collar made the same mistake, since it’s easy to miss the join instructions since most people have their own preference for how they join seams. Unfortunately, they didn’t really address the difference of where the arm/shoulder seam sits (re: the product picture vs. the pattern), other than to basically say the pattern is right. They said “…remember that since this pattern does not have an armhole this makes that the body falls into the sleeve son the body adds some inches to the sleeve”, which I believe means they are saying due to the construction, the arm/shoulder seam will fall like it does in the product pic, but since there are several pictures of other finished sweaters posted online and none of them turned out like the product pic, and the drawing in the pattern book itself shows a narrow shoulder with an arm seam that sits at the top of the arm, I don’t agree. Plus, the only thing I have left to do on mine is seam, I can see how it will drape across my shoulders. On the plus side, I now know to search for pictures of others completed works to determine if I like a pattern’s finished look as opposed to the look on the product page. Thanks for everyone’s thoughts on the matter.