So, I went to university this morning, like a student should, and noticed we didn’t have class. Nice.

So I went to town and bought some tissue/fabric/cloth/drapery, whatever it is called.
Because I have started a blanket for the hot days, in bamboo yarn, 100% bamboo. I wanted to keep this “organic” red line throughout the blanket, but I noticed I did not have enough yarn.

So I might use my silk yarn (for the upper part. It’s silk. silk feels nice against skin, so silk at the top, top!), and maybe the soy yarn if need be (for the lower part. it’s sock yarn. socks-feet. so lower part)
(my logic is something, I tell you!! :roflhard: )

Back to subject: I thought I might lengthen the blanket (or whatever it might be called…) by adding stripes of fabric/tissue/…

I bought sewing needles, because I didn’t have any, and tapestry needles wouldn’t be as good for sewing fabric/tissue/…

Then, I went tissue/fabric/… shopping.

First shop: I explained my case, and the owner (a male one! I was mesmerized by his perfume!!!) told me I would find what I want rather in a different type of shop than in his, but he showed me some of his tissues/fabrics/… before. And said I could always come back if I did not find what I wanted.

Then I went to the shop he directed me to. At first, I was wrong, and searched through a 3 story building…

Then I got it right, and I explained my case to the lady and she showed me some, and finally I decided for two. Cotton.

Then I went back to the guy, because I wanted linen. He and the lady in the other shop said that linen would crease easily. And then it occured to me that I WANTED a crease effect. For the beauty of it. So I went back to first shop and bought some more tissue/fabric/…

And I was to other shops as well, buying incense sticks and strange crackers (made from yuca/cassava/manioc [different names for same plant]). And other things.

Enough now. Hope you’re not bored to death by now …

They look like handkerchiefs because they are still folded, but they unfold to a much bigger size, out of which I will cut the bits I need to add to my blanket. cloud9 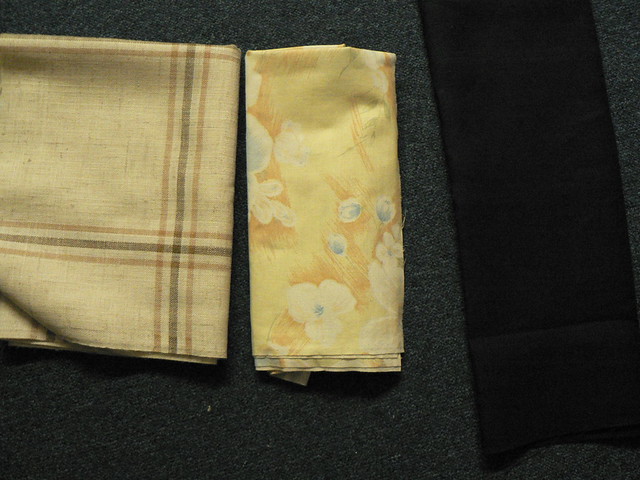 A fusion between sewing and crocheting!

I’m sure it will look awfully bad. But as long as it doesn’t keep too warm in those hot nights, no matter how bad it looks.

I’ve never even thought of combining the two. I’ll be interested to see how your blanket turns out.

I can’t wait to see it! What a clever idea! :cheering:

Try new things. That’s all I can tell you.

Use your knowledge in ways unknown so far to create the unseen.