Hi! I’m new to the wonderful world of knitting. I registered a while ago but had a small issue with getting my registration email so it took me a while to actually be able to post but here I am!

I bought knitting needles a few months ago but quickly became frustrated and bought a loom instead. I have made four hats so far (!) and I guess they came out okay, but I now I want to make a baby blanket for my friend who is due sometime in June. Her baby shower is in about a month…I’m hoping I can do it in that time. However, I have encountered a few issues. The pattern tells me to cast on 27 pegs (although the whole loom is 41 pegs). Am I supposed to go around the loom back to my original peg I cast on, or am I supposed to cut through the middle of the loom? Also, since I’m not going all the way around I’m struggling to understand if I am to go one way (knit all 27) and then go back in the opposite direction and purl? (My pattern says knit one row then purl one row) but like I said since I can’t go all the way around I’m a little confused.

I don’t even know if anyone on this site uses a loom. Sorry for the long post…I’m looking forward to getting to know everyone and eventually being able to help others

The vast majority of people here do traditional knitting with two needles. There may be a few loom knitters, but it may take awhile before you get an answer.

I do not use looms much. I believe you are to work the 27 stitches and then go back the other way and work those stitches. You do not want to go around the entire loom.
However, If you knit one row and then purl the next row you will have stocking stitch. This will curl without border stitches. If you knit every row it will be garter stitch and that does not curl. There are patterns designed just for looms. I suggest you find one of those patterns. If I had a link I would share it with you.

Jan in CA - Thanks for the quick response! I figured it would take a while to get a response which is why I registered weeks ago…anyway…I hope someone who uses a loom will see this…

jinxedone - I bought a book with patterns in it. The hats that I’m making are a “beginner” pattern which I figured was good to give me experience. And I guess I’m comfortable USING the loom but it’s just a basic stitch, I’ve never used a purl stitch. From what I can tell the pattern calls for me to knit multiple separate sections and then bring them together and add the border at the end.

Sewing the sections together and adding a border can gets rid of the curl. It also sounds like a lot of work. Are you interested in finding a beginners pattern online? I will take a peek and see what free patterns I can find online.

Cast on along the loom for 27sts but don’t connect to the first peg. Here’s a video that shows stockinette stitch (flat stitch) on a loom.

I don’t use a loom but I suspect that you’re going to have to add a border to the blanket to minimize curling as jinxdone and jetaime have mentioned. I doubt that just skipping one stitch at the beginning of the row will do it.

jinxedone - It does sound like a lot of work, doesn’t it? I am kind of thinking about finding a new pattern…I mean the one in my book is kind of cute but I don’t think I’m ready to purl. Haha I want something fairly easy but cute that I know I can do and will look good. It’s for a gift and something that (hopefully) baby Sophia will have for a long time. I don’t want it to be done improperly. It would be wonderful if you could find a beginner baby blanket. Please keep in mind that I own a round loom, not a rectangle.

salmonmac - Thanks for the video! Unfortunately, as I mentioned above, I have a round loom and not a rectangle one. Some things are the same but I think the patterns are probably different. But I appreciate the effort!

Actually, the shape of the loom won’t matter. Just remember to use only the number of pegs called for in the pattern (27) and not all 41 pegs. When you get to peg 27, work back to peg 1, not around or across the loom.

ETA: There’s this pattern with a video 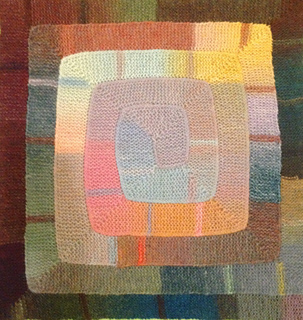 This is a conversion (with permission) of the incredible needle knit pattern 10 Stitch Blanket by Frankie Brown. Please visit her pattern page and consider donating to her charity as a thank you for this awesome pattern.