I am totally stuck with the red area of this pattern, no idea what to do. Internet suggested it was a purl but no purls at all in rest of pattern.

This section is to make 2 long floppy bunny ears

Is the ear supposed to have a cupped shape to it, like a real bunny ear? I think (can’t try it right now) that’s what you’ll end up with.

does it have another name to it so i can maybe find a video?

What pattern is this from? A link to it would be really helpful, if possible, and with a name we might find it.

I think you’re doing short rows here. This video explains it well I think and you should be able to see what you want to do when you wrap the stitches. HTH

this is the pattern, i have it in a book

i just did it and got this. i have no idea if i did it right

It’s indeed short rows. I get more of a point or wedge shape but the idea is that you work more rows on one side of the knitting (the left in the photo) than the other (the right side). I’ve only done the first repeat. The second repeat should give the double pattern that you have. I think you should continue on with the pattern.

Maybe your ears will turn out more rounded at the ends but that’s ok.

ETA: There are errata affecting the ears for this pattern here

Also, if moving the yarn forward to slip and then back is causing difficulty, you could skip that part. Short rows on garter stitch don’t show a remarkable hole at the turn. Just knit the given number of sts, turn and work back on the same sts.

thank u so much for help.

do u think it would still look ok with round edge?

Yes, as I understand it, this is the end that attaches to the head. See the last photo in this project: 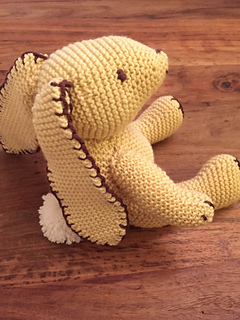 Cast this on whilst looking for a quick project I could knit on the train. It turned out to be a lot more involved than expected, although I’m pleased with the results. The shaping of each element...

oh no, i think i did something wrong

I started with 15sts should that part of pattern create more stitches. I have re started and is more of a point now but I have double the amount of sts.

so frusrated that i cant make an ear grr

You should maintain the same number of sts as the cast on. Up in post 6 I mentioned errata for the ears (also legs):

Rabbit
page 62
Ears
Cast on 13 sts, not 15.
After working the 48 rows and the next 10 shaping rows, you should repeat the last 2 rows once, not twice to decrease down to 5 sts

Here’s a video for short rows. It shows a slightly different order for the wrap but the idea is the same. It also shows picking up the wrap which you don’t need to do unless you want to.
http://newstitchaday.com/wrap-and-turn/

i made the ear whoop whoop. thank u so much for ur help

thank u again so much for your help

Finished the bunny today so happy with how it turned out

Oh, perfect! You got just the right expression on the bunny too. Well done.