Hi,
I’m in search of the written pattern for this knitted dishcloth.It was a free pattern from a knitting group such as Monthly KALs, etc.

Thanks so much for your help.

What are those designs? It would be easier to search if I could clarify.

Those would be 4 ribbons as in the Breast Cancer Awareness ribbons.
Thanks so much for trying to help me locate this pattern. I have been searching for months!!

Oh I see. The color through me off. Breast cancer awareness is usually pink. Although I found several ribbon dish cloths none of them were like that. Could that one have been a personal pattern and therefore not a public pattern?

I thought it came from one of the knitting groups I used to belong to but I can’t swear to that. Usually if its personal it also it’s a paid one and I don’t remember ever paying for a pattern. The reason I made it yellow instead of pink is that there is a local group called the Yellow Ribbon Girls----3 sisters who formed a group to collect and send items to the troops overseas.It has grown into a huge organization receiving items for the troops from all over the US.Anyway, I want to make washcloths for them to sell. Maybe some one could figure out a pattern from looking at it ???

Just fyi those are holes or spaces in the ribbon not a different color of yarn.

upon looking real close there is also a purl heart right in the middle! Cool!

This is the only one I’ve seen. You’d have to make up the placement and the heart. 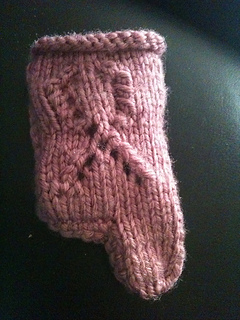 This pattern may be used for the cause of your choice, just change the color!


Since it was a little circuitous to get to the pattern, here’s the page. Look a bit past half-way.
https://www.ravelry.com/stores/holly-marie-designs
1 Like
PennsylvaniaPat November 25, 2018, 8:23pm #9

I just found it the the Yahoo Group Monthly Dishcloths. It was designed by Sue Schaeffer for Harvest Moon Designs. Thank you again for all you help!!I love you all