I am considering starting a Pi Shawl and couldn’t decide what size needle to use and decided the best way was to give it a shot with some leftover lace (and also wanted to try Emily Ocker’s cast-on.)

The problem I am having is with the YOs when still a small number of stitches on DPNs or magic loop or what not. I find rounds beginning with YOs awkward to begin with, but now that I’ve transitioned to a 16" circular, I see that the YOs at the join points on those first few increase rounds are HORRIBLE, like the tip of my pointer finger fits through those, but can’t even get the tip of my pinky into the non-join-point YOs. Of course once transitioned to the 16" needle and working in the round, this will no longer be an issue, but are there any tips/tricks for making these nicer and more uniform to the others in those beginning rows or anything?

Any uneveness in sts or YOs will be fixed when you wash and block it, so I wouldn’t worry. If I start with a small number of sts like 4 or 8, I put the sts on only 2 dpns and use a 3rd to knit with until there’s more sts, then add the other needles, so you have less ends to YO at. When using ML, I just hold the back sts really close to the front ones and pull the yarn snug. It’s another thing that just takes practice, so doing some samples is a good way to get it.

thanks a bunch. I should have deleted the other one when I put this one here, sorry about that!

I’ve experimented a bit with the holding it snug and how snug and I think I’m satisfied with what I’ve got now, but now the cast-on is irritating me LOL. It just looks off, asymmetrical, I’m probably doing something wrong there too. Anyway, thanks again!

I just use a LT CO and use 2 dpns or ML. It can have a bit of a hole in it, sew it closed with the tail yarn.

well, the problem I’m having actually, is that the center isn’t symmetrical… I don’t know how to describe it really, but I tried Emily Ocker’s cast-on and then a “lighter” version of it I found at Knit Picks site and you know when you start a small ring, usually when you’ve gone out a few rounds, the middle is all pretty almost like a flower/star? It looks like that but like there’s a petal missing… I’m going to try to get a pic of what I mean, but can’t make promises since only have my camera phone.

this is the best that I can do, but you can pretty much see what I mean, at the bottom of the “flower.” Not sure if I’m doing something wrong or what, but that’s the type of thing that will irritate the crap out of me LOL 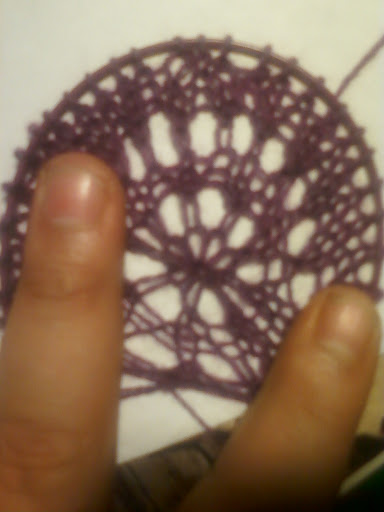 Wouldn’t bother me, I’d call that close enough. A lot of things like that will block out anyway. You can do another inch or two, then block what you’ve got then to see what happens.

I actually re-tried Judy Becker’s Magic Cast-on Method for Small Circles and I’m happy with the second attempt. The first time I cast on 5 per her instructions and tried to get up to 18 gently and of course that didn’t work, so went ahead and started with 9 like the Pi directions (no clue why I didn’t do that to begin with) and I’m happy enough with the result. There is no flower/star in the center like with the other cast-ons, but that means nothing to be asymmetric LOL. My joined YOs still need work, but getting better! Thanks again!

I 've tried that one and can’t get it to work. I use the turkish for a bag that has a long rectangular bottom; for circles I just co and join.

If there is a huge disparity in size between your yarnovers at the start of a round (or dpn) and those internal to a round/needle, you can skip them, then lift the bar between stitches on the next round to create your yarnover. Many people do this routinely when a yo falls at the juncture of two needles.

I consider it to be a huge disparity, but I’m hypercritical of my own knitting too. I’d like to try your suggestion, but I’m not sure I understand where the M1 would appear in the round. For instance, with this shawl, it’s CO 9 sts, K 1 round, then YO, K1 around to 18 sts, k 3 rounds, repeat increase round… so on magic loop, assuming 5 sts on N1 and 4 sts on N2, would it be

skip YO at beginning and end of each needle, then put a M1 in their place on the very next round?

ETA: I said this wrong, Round 4 and Round 5 would be for subsequent increase rounds, not actually rounds 4 and 5 since there’s straight knitting between, sorry for confusion.

He’s saying that if you skip the YOs on the round you’re on, then on the next round lift the strand between sts [I]like[/I] a M1, only don’t ktbl to keep it open. That’s like a smaller YO and is what you would do if you accidentally forgot one on a previous row.

I got the “real” yarn in yesterday and so went ahead and tried it with the bar inc only at the beginning of each needle, not beginning and end like I’d wrote in the post and I’m quite pleased with it. My goal was to get it onto 24" needles before I got on the train, and I’ve met that goal, and already learned/accepted some things. I look at it and see all kinds of wonkiness between YO sizes (not near as bad, but I still see some ginormous ones taunting me) and tension and fuzzies and just all kinds of stuff that makes me wrinkle my nose at it. Like you said in an earlier post, I know blocking will take care of LOTS of that, but for what it doesn’t, this is the first time I’ve made it more than a few rows with actual laceweight yarn and I accept that it’s not going to be anything near perfect and if nothing else, it will be a good learning experience (hopefully without driving you and the rest of KH batty in the process.)

Thanks again to you and everyone for your help!

And until you do see it;I am sure things will really bug you that later, with experience, you will (possibly) be able to ignore.

well, I’ve returned from my trip to mom’s and I rarely worked on the shawl, I’m afraid. I got entirely obsessed with the Teosinte Sock, BUT the few times I did pull out the shawl to work on, I would do a few rows and stop to look at it and bang, dropped stitch slithering away several rounds behind. I think I remember trying lace with the Alpaca Cloud yarn and wishing that I had used the smoother wool… I did go ahead and order the Harmony wood needle tips for the shawl, hopefully that will help.