So a few of us have purchased Series 100 of the Knitting Daily TV (show) which airs for free in some States…and the rest of us have to purchase the DVD series. It should be noted…Knitting Daily has also offered single episode downloads at a modest price.

I started watching Series 100 over again. It’s amazing how much you can glean from these shows the 2nd and 3rd time!

I’m excited to say…I’m going to knit a stashbuster wrap. featured in Episode 105 in Series 100.
(Almost all projects that are demonstrated on the show are available for free from their website. You need to log in to download the free pattern)

The pattern is called the Modern Quilt Wrap. There’s a project page for it over at Ravelry. From that page you will see a link for the free pattern.

Anyway…in Episode 105, Eunny Jang was displaying several versions of the wrap, sent in by viewers I think. I saw one version as a scarf! That was so cute, too. Eunny also shared a felted bag using the pattern, knit by a viewer for her mother who lives in Arizona and doesn’t need wraps or scarves! The bag was SPECTACULAR!

I’m mostly interesting in the wider version, the wrap…but you could easily make this into an afghan, lapghan or the scarf!

I’ve had some Silky Wool stash knocking about for ages, five of the colors originally purchased for a horizontally striped pullover which I’ve since lost interest in. Ever been there?

Here is my project page, if you’d like to drop in! I’m calling it what is really is: Mitered Squares Wrap. I’m using a dk yarn. You can use just about any weight yarn you wish, but only one weight throughout the project, for obvious reasons.

Here are my eight colors, all assembled for a “family photo”.
I only have 3/4 skein of the black, and 1.25 of the chalk white. So they’ll be used in a contrastive way, here and there. I have 2 of most of the colors, and five of the darkest brown, which might also be used for an i-cord edge. I think this wrap needs a teensy edging. I-cord is the most polished IMHO. I dislike crocheted edges, except for reverse single crochet called ‘crab stitch’…but it’s difficult to get real even. It’s a fight the entire way. 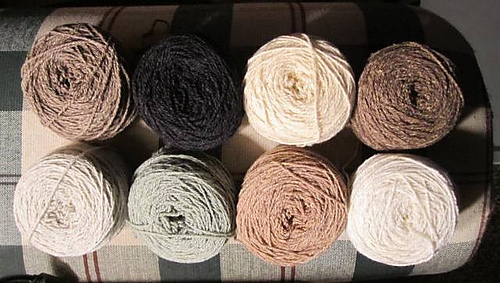 Most of the Ravelry projects (584 of them!) use wild colors. I think mine will
be the first to use natural, understated (boring?) colors. I haven’t viewed all of the 23 pages yet…working on it…

There are several really nice bags, too!

This entire thread will be devoted to CHAT regarding KDTV…please feel free to comment on anything related to KDTV…any of the 100-900 Series episodes. I just got things rolling cuz a few of us are watching Series 100 together!

This chat is in General Knitting (not The Lounge) [B]because it is knitting related[/B]…it’s not about dogs, cats and so forth! :teehee:

They look like ‘sophisticated’ colors to me, not boring at all. The yarn, seen in the hank on your Ravelry page, looks gorgeous. This is going to be fun.

I really enjoyed this segment!

One of the segments in Episode/Show 109 has a guest designer, Laura Irwin, who is demonstrating that wonderful Boot Bag! She’s showing helpful finishing steps and techniques.

The pattern was in her book, but looks like Knitting Daily is offering the single pdf for free!

Find hours of knitting articles, educational videos, expert tips, eBooks and knitting magazines to inspire your next exciting knitting project at Interweave.com! You'll discover everything you need for endless inspiration to never stop knitting with...

Just when you [B]think[/B] you couldn’t possibly be INSPIRED by felting possibilities…just watch KDTV Series100, Episode 112!

I’m so excited by this Episode. It gives me new ideas on what to do with a mitered squares piece I’m knitting, using Fleece Artist Aran Alpaca! I’m contemplating a lapghan…but now I see the possibility of an OUTRAGEOUS felted knitting bag!

Also included in the show…How to Create Felted Flowers and apply them to sweaters, or bags, or anything!

My daughter’s boyfriend will be here with her today so hopefully he can help me get these copied to DVD. :yay:

ETA: I just watched the first two episodes and already there is a lot of good stuff in them, I must watch them again and this time I’ll make some notes. So far I think that seeing some knitting that resembles mine (I could see some uneven stitches in the examples!) is the best part, it is a real encouragement to me. They really know what they’re doing and I am getting better.