Ok, so I have started with my first pair of socks. I think I have it started ok. I started using size 3 crochet thread because my previous attempts with sock yarn were making it untwist and bugger it up. The crochet thread seems to be working ok and hasn’t gotten splitty.

As far as increasing, kfb basically is putting one continental knit and one “picking” knit stitch all in the same stitch?

My toe area looks a bit boxy, could it be because I didn’t pick up my edge stitches quite right? It almost gives the appearance in crochet in the round through the back loops to make a basket.

Are socks easier on circulars than DPN’s? I’m using the dpns now, and they were quite clumsy at first, but I’m getting used to them a bit and it seems to be going a bit quicker.

I will probably have more questions as I progress through the pattern, right now to read the heel it isn’t making much sense. Maybe actually doing that portion of the pattern will be better than reading through it. It talks a lot about wrapping and unworked stitches, and wrapping in knit fashion.

I take it you’re working toe-up? What pattern are you using? If you could link to the pattern it might be helpful. A knit stitch is a knit stitch whether you work Continental or English. I don’t understand what you mean by “kfb basically is putting one continental knit and one “picking” knit stitch all in the same stitch”. If you are unfamiliar with kfb check this video. Sock toes can look boxy and that’s OK as long as they fit. DPN vs circ needles is a matter of personal preference.

I’m not sure how you picked up the edge sts but just putting the needle into the knit fabric as in this video works well and gives a very intergrated looking fabric.
Yes, a pattern link is always helpful if you can post one or a even a pattern name. 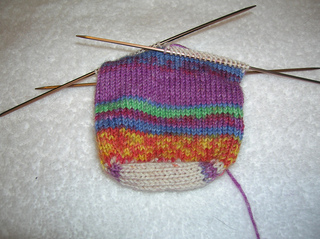 There are many great sock patterns out there…this is my own version of the toe-up beginning. It seems to create a more sturdy toe end, and is easy to start and quick to show progress.

I watched the video for how to kfb, so I think I’m doing it right. It seems to look ok as far as an increase, and not obvious. I tried doing a make1 increase, but it left a little hole. I wasn’t sure if it was typical for a m1, or if it was because of the crochet thread. I like kfb better anyway.

The boxiness at the toe is really part of this particular pattern. Not all patterns have you pick up around the rectangle of the toe even toe up socks. Often the toe is shaped by increases at either end of the toe sts for a more gentle, sloped shape.

When you did your M1, did you knit through the back loop? That closes the hole. For socks I usually use kfb but I haven’t started a toe as in the pattern.