How do i knitt this @_@ there's no directions

Oh that’s quite some work you got there.
I’d rather not double knit it if you’re a beginner. Double knitting could complicate this. Instead, knit it twice and seam together.

Every square of that chart is a stitch, and you knit every stitch, and when you hit a blue square, change color. The white squares are the primary color, the blue ones the second color.

Read the chart from right to left, starting at the bottom (the last chart).

If you were to doubleknit it, you’d change the primary and secondary thread each time the color of the square changes.
When turning the work over (starting a new row), you have to “invert” the colors of the chart for that row. (You’ll see a white square, but you should knit it with the second color).
If doing so, always read from right to left.

So that makes every second row an “inverted” row.

the pattern is from here … and on the picture it has the scarf just from the border … so how would i start it … and be able to have that space between the corner of the stars ? 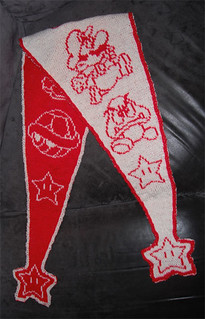 The pdf contains the chart for a double knitted Mario themed scarf.

if i were to use two skeins as the tip recommends … how do they end up being joined together later?

thanks again for your help =D

Ah, excuse me. Now I see how it’s supposed to look.

Well you have to work increases and decreases along the border to get it to look that way, but they are harder in double knitting, and first I (or you) would have to figure out the exact way of knitting the stars. For the inner part of the scarf, what I have said above still applied.

well, if you double knit, cast on 16 twice, and double all the other numbers. cc means change color.
I’ve written it up to the point where both cast ons are joined. From there it’s rather straightforward.

If the pattern is expanding to one side, increase (I used kfb (knit front and backloop) here, any other increase except yarn over would work) or cast on if necessary. If it’s going inward, decrease or cast off stitches.
For each “square” the shapes moves, decrease or increase one stitch on the end it is happening, orienting yourself on the chart.

Is that making it clearer?

thank you so much for your help …

how do i increase when double knitting ?

That the problem. I don’t know that either. I’ve done it before, but can’t remember how it is done. I think you knit 1 stitch first with color 1, then don’t drop it off the left needle, purl it with color two, drop off left needle, repeat for next stitch.

You better look it up though…

i figured out how to increase and decrease … yay !!

or do i cast off those sitches ? then how do i continue for the top of the star T_T

Just imagine a line going through the middle of the scarf pattern. Everytime you move away from the line, you increase (to the side it moves), everytime it moves towards the line, you decrease.
Sometimes you have to cast off instead of decrease and cast on instead of increase, but I’m sure you’ll figure that out. If not, I’m still around.

tyvm for all your advice and help !!