Hi I’m slightly confused as I have never seen a pattern with these instructions
Cast off 4 at end of row R/S turn cast on 16 can anyone help with this I have tired this but as there is one stitch left from cast off it is leaving a loop/ hole. Do I slip this last stitch back after turning?

Welcome to KH!
What is the name of your pattern?
You can really only cast off at the beginning of a row. Work to the end of the row, turn and cast off 4 sts. Then you can cast on the 16sts. You can use a knit or a cable cast on if you’d like. Here’s the knit cast on. 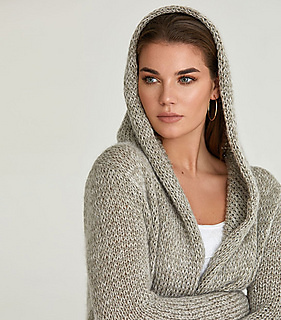 Could you type out the part you are stuck on again on its own line, making sure to include the punctuation, or include a photo just of that section of instructions?

I’m having a bit of trouble parsing it.

It would be great to know which bit of the garment you are working on too, if you don’t mind.

I am at the part shape shoulder and hood work 1 row ending with WS
NEXT ROW R/S cast off 4 turn cast on 16 turn Knit to end this is leaving a hole as there is still one worked stitch. I have never had to cast off and then cast back on. Any help is appreciated!

I don’t think this is right. Is this the beginning of the hood with 4sts cast off and 16sts cast on?

The photo of the pattern instructions that you posted most recently is for the opposite edge of the hood. That works out as written because the cast off is at the beginning of the row. The cast on of 16 sts follows immediately.

See if working it this way helps. Your knitting looks lovely and even; it’s just a matter of getting over this glitch in the pattern.

Thank you so much I appreciate your patience with me😀, I was just playing with a swatch of wool and I think the only other way to achieve the cast on at the end of the row is to slip the worked stitch onto the wrong side and then cast on via the thumb twist method, I don’t like this method as it cast on is loose but it does avoid the big hole. I’ll undo the work I’ve done and try it hopefully it will work !

I agree about the thumb cast on, not the neatest or sturdiest. Have you tried cast off at the beg of a row then casting on for your swatch. It really does work and you have the advantage of a neater cast on.

At any rate, you need to do what makes the most sense to you. Good luck with this beautiful sweater and do please post a photo when you finish.

The way you have suggested is a much neater cast oni really don’t understand why these patterns make it complicated and leave us all guessing how to do things! I will most definitely post a picture even though this pattern seems simple it has been challenging with all the confusing instructions

Hi thanks for your input according to the instructions it’s definitely meant to be cast off at the end on the R/S it has been very confusing but thankfully I have managed to cast on as the previous message stated after completing the K row on the W/S. I’ll post a picture shortly as I’m sewing the sides up now!

Gorgeous! You worked that out so well. Enjoy wearing this very pretty sweater.