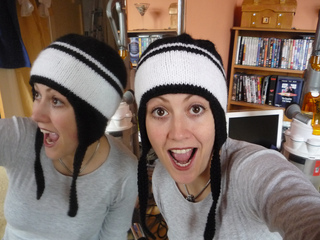 If like me, you have spent ages trawling the net for a hat pattern that does not require circular needles or the dreaded DPNs (yanking out clumps of your hair in the process) then your worries are over.

I’d like to create a liner nearly identical to this one:

I would like to know if anyone has input on the easiest way to accomplish it.:mrgreen:

I keep waiting for you to ask an [I]easy [/I]question. :lol: But, why would you.

I looked at this and I don’t have a good answer, but some ideas. The fur stuff would probably be a type of fabric that wouldn’t unravel. Use your ear flap pieces as patterns and make the fur piece just a tad smaller. Maybe sew it with a whip stitch with a sharp needle and your yarn, or maybe thread. :shrug: Do you want to line the whole hat all the way to the top? Techknitter has some information about lining a hat with polar fleece. This would be different, but maybe some of what she says would be helpful reading. LINK She has instructions for doing the whole hat (which method probably wouldn’t work with the fur) or just around the head.

One thought that occurred to me was to do basically what she says for doing the headband type with your fur (but I would butt the ends together and overcast them), then maybe sew some polar fleece to the top of the band and make the upper part of the lining of fleece the way techknitter says. That would give the illusion the hat was lined with fur all the way, and folks won’t see the inside when it is worn.

Or make a continuous band with the fur, around the head and experiment with making pieces shaped somewhat like a child’s drawing of a house, straight on the side, then sloping up in an A line, possibly flat on the top. It might take 4 or 5 of them to shape the top with fur. I think some baseball caps are put together this way. (Sort of:lol: )Again, make all the joins butted together.