I am a slightly experienced knitter and familiar with a few basics and some new stitches thanks to Youtube tutorials. I have a stocking cap I would like to make which calls for 8 rows of ribbing, knit 1, purl 1.
I would like to substitute single strand double knit stockinette for the regular 1x1 ribbing to give the fabric more thickness over the ear area. Then I would like to switch to regular knit and purl for the rest of the cap. With the double knit, one strand, I knit stitches and slip purls. If I just switch to knitting everything, will the fabric become too wide? Would I need to make some sort of adjustment?
Thanks,
Mike (Twiststitch)

Do you just want it doubled over the ears or over the whole band?

Single strand double knit requires knitting back and forth as far as I know. Were you planning on knitting flat and seaming the hat?

Yes taking away all or part of the ribbing will change the way it fits. It is usually the band you want to be ribbed, the top of the hat not so much.

I’m not sure if double knitting is something you really want to do or if you just want some method to make a double brim, but I have made a hemmed hat which is just a double hat brim then stockinette top. Here’s info if you’re interested -

Here’s my Ravelry page with a couple of the hats. The top picture and the green/orange one are both hemmed hats.
https://www.ravelry.com/projects/JanCA/4-skeins-of-encore--how-many-hats

Greetings.
Thanks for your feedback. I wanted to have a band of thicker knitting all through the whole band.
The single strand double knit does go back and forth. I’ve mostly mastered that. I’m experimenting with the fisherman rib.
I’m leaning toward using a fisherman rib for the band instead of the regular knit 1, purl 1 rib in the directions. In those directions, the rib is made for eight rows and then switches to knit one row, purl one row. The plans also have a sewn seam rather than knitting in the round or with DPNs. I had thought of knitting with DPNs as I don’t do well with sewing up seams, but that method if very new to me and my trial knits weren’t all that successful.
At this point, what I am envisioning would be to do a fisherman rib for the band and then switch to the knit a row, purl a row with a seam. Knitting flat.
I wonder if there is something special I need to do when going from fisherman rib, (or single strand double knit) to go to the knit one row, purl one row. Increasing? Decreasing? Or nothing. Just do the switch?
Thanks again.
Mike (Twiststitch)

Hi Jan in CA
Thanks for your knitting suggestions. I will study your instructions. I experimented with knitting one row, purl one row for stockinette stitch for about 8 rows and then switched to the knit 1, purl 1 ribbing for 8 rows. Then I folded the stockinette part inside, (DPN knitting) I then knitted a row picking up the edge of the stockinette edge. And then continued stockinette. That sort of worked. But I’m not great with the DPN method yet. Thanks again.
Mike (Twiststitch)

I knit in the round using magic loop with a 40" cable for hats. You could do any stitch in the manner I suggested. I’ve just done stockinette myself. If you do the provisional cast on you just knit the two stitches together rather than picking up stitches. I find it a neater look. It’s a learning experience though for sure.

I would do it in the round with 2 strand double knitting. No seaming and no having to slip every other stitch and turning to make 2 rows for one row’s progress. Seaming 2 layers may present a challenge especially if you don’t like seaming.
I don’t know why you would but if you don’t want the crown doubled you could tie off the extra strand and stash it between layers then knit the sides A & B together to make it one layer (single strand or double strand you will need to do this to switch to single layer).

If you don’t want the crown doubled to avoid decreases, decreases in double knitting are easy. It’s a matter of rearranging the stitches from ABAB to AABB. Put the needle through the Bs, around the A between them, pull them off the left, pick the A that dropped up with the left then slide the Bs back and do the decreases.

Some issues:
If you’re going to be linking the layers doing color work between sides the ribbing probably won’t suck up as much as normal ribbing.

You have a choice of nestled ribbing or opposing ribbing. It does make a difference.

For some time now, my stats tracker has been telling me that a significant percentage of viewers coming to this blog via a search have been ... 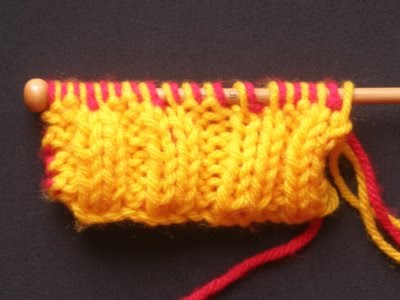 This probably won’t apply as much since you are doing K & P on both sides but if you make a hat in double knit where the sides aren’t swapped often you may find the inside layer comes out quite a bit larger than the outside layer. 2 reasons, the difference in gauge between your Ks & Ps, the difference in tension between your strands. I’m having luck wrapping my first strand normally around my pinky, second strand follows that but wraps the opposite way around my ring finger, (and just for giggles since I’m here and know what I do with a third strand) the third strand wraps twice around my middle finger.
The tension with multiple strands is an issue so big I’ve been thinking of inventing a tension ring to go along with the stranding guide (I think stranding guides are great for all stranded work, some people don’t love them but they’re cheap to try)
http://www.knitpicks.com/accessories/Yarn_Stranding_Guide__D80621.html

Hello Mike.
Wow! What a wealth of information. Thanks so much. I will explore the ribbing in double knitting!
I am so inexperienced at this point, I will really have to study your post very carefully.
And being such a novice…I decided to stick more closely to the directions for this cap. Unfortunately, it looks and stretches out to be too small, even thought this is designed for my size head.
I thought of adding an insert of knitting but I think I will sew up the hat at some point and give it to a smaller headed person.
And then try again, maybe attempting knitting in the round. I’ll have to do some experiments first.
Again, many thanks for all your help.
Best wishes for February.
Peace,
Mike