Okay, so the next time I say “Who needs a pattern for that?” somebody remind me about this.

A bit of background. A good friend of ours frequently brings ponies into the conversation at random, but usually in discussions of things we’d like to have (“And I want a pony also, too!”). Without getting too far afield of the knitting part of the story, she recently quit smoking after … I’m not sure how many years, and is approaching her 28th day. This, my friends, is a big da*n deal as anyone who’s ever quit will tell you. So Wendy and I decided that if there were EVER a time that she should get that pony she’s always talking about, this was it. But we didn’t want just any old pony… oh no. We wanted an extra sparkly pony! And frankly, most of the patterns we found were pretty boring (and involved a lot of sewing… as toy patterns tend to do). So we mated a sock to an eggplant (like ya do) and created a psychedelic pony… named Madge. Which will NO doubt be a part of our shared lexicon until the day we die.

The problem with just making sh… stuff up is that it never [I]quite[/I] looks the same in the world as it does in your head. Plus, if you’re a little fuzzy on the details of how a horse is put together anyway you may wind up with something that more closely resembles the love child of a pig and a sheepdog. 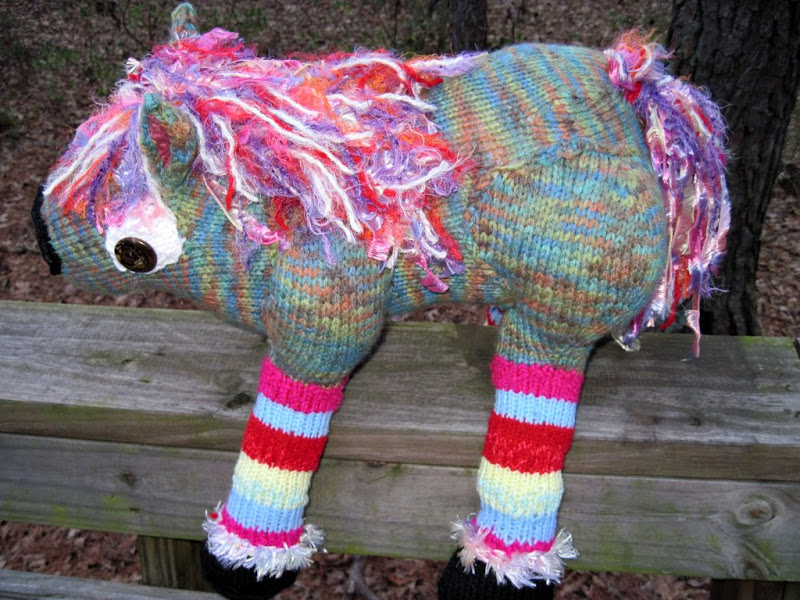 Nevertheless, it turned out to be quite the… thing. And as a bonus I got to try out W&T short rows which prepared me for… not making socks at any point in the near future. It also used up two skeins of Encore chunky in a log forgotten colorway that were hanging around just waiting for a stash buster like this to come along.

You get a better sense of scale from this angle with the seat/railing of the deck in the background. This? Is no small pony. Two full skeins of Encore plus the extra for the “leg warmers” and hooves and decor, and 2+ bags of polyfill. (Which led to conversations like: How’d you spend your weekend? Stuffing fluff up a pony’s butt.) 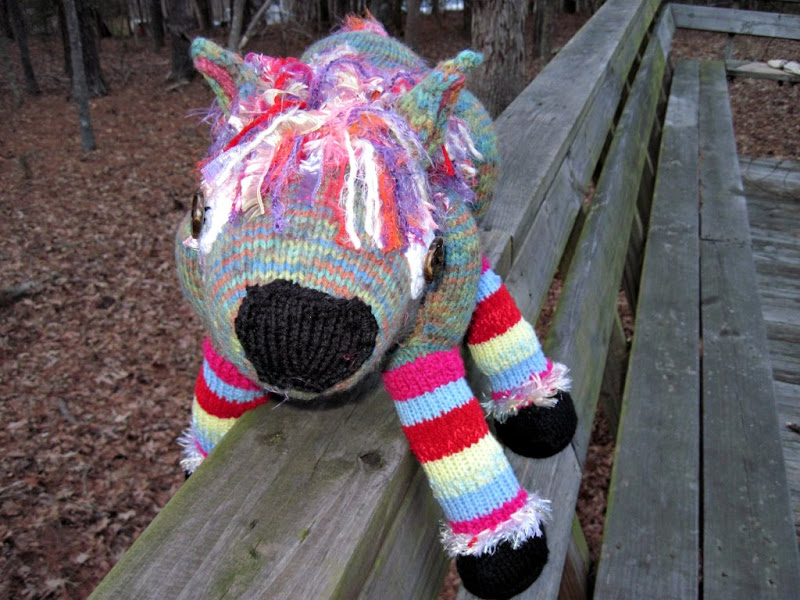 The “presentation” is scheduled for Wednesday evening when we meet our pal for dinner. And yes, we WILL make her let Madge sit beside her at the restaurant. We’re even contemplating asking for a booster seat.

But next time? I’ll find a pattern I can dress up.

This is great! And your descriptions always make me ROFL…

Well! Madge certainly deserves a BADGE, and so do you and Wendy for your perseverance . . . and creativity . . . . and resourcefulness . . . . and for keeping your sense of humor. She’s a keeper, that’s for sure! I bet your friend will have no problem showing her off to everyone who comes along! It’ll be all smiles all day!

Thanks for sharing the back-story, too!

This is great! And your descriptions always make me ROFL…

We finished the last of it yesterday afternoon and every time one of us happened to look in that direction we’d double up laughing. In a way it was a lot like working on Bantamime, The French Hen… the closer she got to being complete, the funnier she got. And by the time Wendy was putting the “feathers” on the hooves, neither one of us could stop laughing.

What a way to commemorate a very special occasion. The pony is cute, interesting, creative…most of all unique. Well done. Pat yourselves on the back. I’m sure this is a creation that will be cherished.

First off, congrats to your friend for quitting smoking! Your pony is very umm colorful! lol

Absolutely love it!!! I’m sure your friend will be delighted to receive such a lovingly made gift. I can’t quit smiling just thinking about this colorfully( is that really a word?), well thought out(?) gift for the great accomplishment of quitting smoking. Please let all of know what she says when you present it to her.

With Madge to help celebrate, who could ever think of a going back to smoking? What a wonderful reminder and great gift from very good friends. Enjoy your dinner together and don’t forget to include the pony in the reservation.

Tonight’s the night! Wonder how she’s “taking it”??? My guess is :woot:

Tonight’s the night! Wonder how she’s “taking it”??? My guess is :woot:

[B]UPDATE:[/B] Nancy got to meet Madge, her new pony last night! I could blather about her reaction, but a picture’s worth a thousand as they say. And this will give you a much better sense of scale too. 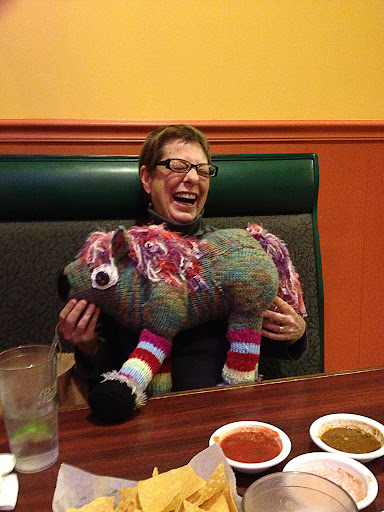 Mission Accomplished. And a rousing success also, too.

Mission accomplished indeed! That’s awesome! Hopefully the pony and the memory of that night will help her in her journey to keep off cigarettes!

Who could ask for more?

What an adorable little character he is! Great photos!

I understand you on the patterns that require a lot of sewing. I don’t like all that crafty stuff very well.

Madge is great. Her neck could probably be a bit longer, but her hindquarters are super. :lol: Love her mane and tail and the “feathers”. Good plan for your friend.

Nancy’s reaction made it all worth while!!

I understand you on the patterns that require a lot of sewing. I don’t like all that crafty stuff very well.

Madge is great. Her neck could probably be a bit longer, but her hindquarters are super. :lol: Love her mane and tail and the “feathers”. Good plan for your friend.

Nancy’s reaction made it all worth while!!

A friend of mine suspects that most knitted toy patterns are adapted from sewing patterns, and that’s why all the sewing. I did find some (after the fact) that don’t (appear to) involve as MUCH sewing, so I’ll likely explore those before doing anything like this again unless I have a definite design in mind.

But for all that, the response she got was all that really mattered.

Great story! (and pics). You are a good friend.