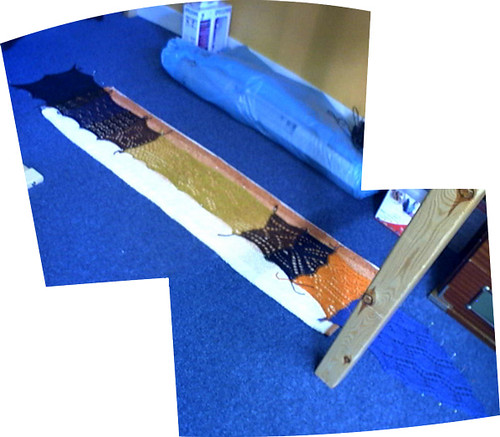 Here are the pictures, sorry for the quality, but I just have a webcam to take pictures… But better than nothing :happydance:
The story of the scarf follows, but you don’t have to read it.

Some long time ago, after I learned how to knit and purl, I decided to do a scarf for myself, ribbed. Two colors (dark dark blue and black), alternating the colors every two rows…

So I began. But the yarn was so thin, the needles were so thin, it took me forever. So I just left it there, didn’t want to work on it. It has been lying there for almost a year, and now I decided to pick it up again, but after two rows of ribbing, I was bored… :teehee:

So I decided I’d put some lace into it. :mrgreen:

Then, as I was still working with this thin yarn, on thin needles, and it seemed to take forever to advance, and since I had some Elsebeth Lavold from my first Lace Scarf, I decided to put some of that into it.

But then I thought that that would look odd, surely,… :think:
I had just finished a dark dark blue pattern. So I added a few rows of black, then joined the thick brown and knitted a few rows, then added the golden Elsebeth.

I stuck to the Elsebeth quite some time,…

Then went back to brown, then black and blue held together (tired of those thin strings), and, as I felt crazy enough, I added some orange.
In fact I wanted orange to be the last color, but as it looked, I wouldn’t have had enough yarn left to bind off,… So I decided to put some sportweight blue. :noway:
After doing two pattern repeats, I wanted to end it, (It was 12:30 am and I wanted to go to bed) but then I thought, I might as well do a tip. Looks more extravagant. Searched for a suitable pattern (it was 2 am), found one, did that (3 am), and finished.

Now, the problem: I forgot to take my needles with me,… (Don’t stone me, I won’t do it again…:pout:)
So no tapestry needle, nor crochet hook to weave in the ends…
But I absolutely wanted to finish it, didn’t want to wait another week to finish it… So…

I decided to claim that those ends hanging out are decorative fringes. For that I added “fringes” on the other side of the scarf as well. (There were many ends hanging out…but not enough to look like fringes…)
Can you imagine how hard it was to get those things through with the help of a knitting needle ?! (I didn’t do many “fringes”, I would have gone crazy, it was 3:30 in the morning)

After putting the “fringes” in position, and clipping them to uniform length, more or less, I soaked the scarf in water.
Then pinned it down to the floor (Don’t stone me again… I don’t have any other place to do it…) :sad:

Now it’s still pinned down, since the weather is cold and wet… But I took some pictures of it.
It’s a mix of yarns and patterns, and it’s my first of that sort, so sometimes, pattern is on “wrong” side. And sometimes, there’s a border, sometimes not… But overall, I’m happy with the outcome. For the next project of this sort, I might work it out better though. (And weave in ends… :oo: )

Finally, I have a scarf for myself… All the others I gave away. This is quite some oddball scarf, but I plan on doing another one for myself, a “normal” one. I just wanted to have one for the moment, as it takes some time to do another.
I was amazed by how quickly it was finished.

Anyway, if you read this whole story,… :woohoo:

Quite a scarf, good job!:cheering:

That’s a great story! And a one-of-a-kind scarf that people are sure to notice, and you’re sure to enjoy wearing. Great job!

One of a kind, that’s true. And one who actually read the story, wow. I was just very tired, because I hadn’t got much sleep because of the scarf, when I wrote that.

Now I just have to get it less scratchy

Use Soak if you can find it, works great. I can’t stand anything itchy around my neck, but Soak works for me. I know there are others, just can’t remember their names.

great scarf and what a journey it was to get it. It’s the story behind it that will make it even more special to you.

I read every word of the saga. Quite a story. I even went to FLICKR and looked at all the pictures of the different parts and with my dial up that took a while.

You have made a lot of advancement since you did those first few rows. I enjoyed looking at all the kinds of lace you put on this scarf and the “tip” was fun. Did you actually do all but those first rows in one sitting? That is a lot of lace.

How nice of you merigold. I did the lace on two consecutive days, it went extremely fast.

That’s a great story, and what a cool scarf! You did a great job, you should be proud of it!