You may have seen the Hockey Chicken I made for my grandson, and it will probably occupy a place in the Carolina Hurricanes Shrine in my son’s house. So naturally his dad (who’s an even BIGGER Hurricanes fan) needed something equally unique. You’d have to understand, my son is … a bit of a collector of Hurricanes memorabilia. So finding something he doesn’t already have is a challenge at best. BUT… if you can make it yourself, you can give him something nobody else has. Enter the Special Hurricane Forces felted beret. 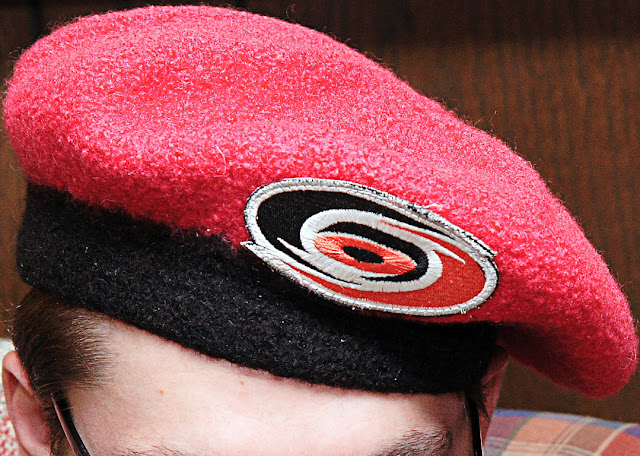 I’d never felted ANYthing, so this was quite an experiment. But it’s not as hard as all that. Just knit The Hat That Ate Chicago, wash it in uberhot water, block on something the right size and shape and take the bows.

I used Cascade 128 chunky wool for this piece, and I gotta say it felts [I]beautifully[/I]. What looks like “frost” on the crown is actually just the flash of my camera picking up all the “fuzz” I didn’t manage to shave off with the little battery operated clothes shaver thingie.

The “flash” (patch) was kind of a problem. None of the patches available for sale were the right size – they were all WAY too big. And none of the pins available for sale were the right size either, they were all WAY too small. BUT, undaunted, I found an old hat that had been a giveaway at a long-ago game by some sponsor or other that had an embroidered logo on the front. So I cut that out of the old hat, pressed a piece of fusible interfacing on the back of it and trimmed it all down to fit. And then realized that there was NO way I as gonna sew the thing on by hand (not without using a hammer anyway). So I managed to tack it down enough to locate it and took it to the tailor shop who had a commercial sewing machine and could nail it down just fine.

The finished product was quite a hit!

Absolutely marvelous. Reduce, reuse, recycle. WIN WIN WIN Bet he loves it. If necessity is the mother of invention, desperation must be the father.

Perfect hat for the man who has everything Carolina Hurricanes. You may be getting requests for more. Well done!

Wonderful! I love felted projects so much! And a HAT! Wow!

Wow! That is amazing! Great work!