Adding hoods to sweaters is a new skill I’m learning. Finally got it licked. Third time’s the charm. All that’s left is weaving in the ends and buttons attached.

The yarn was a delight to use. Joann’s Sensations Rainbow Classics brushed bulky acrylic in bright baby pastels. I loved the way this self striped.

That’s one sweet sweater. Fabulous and oh so beautiful.

Sorry for poor quality. Trying to take this pic with a webcam. Here’s a closeup of the colors.

Oh please, that is so adorable! You have been veery successful with this sweater and hood. It will look terrific, cozy and warm.

Those hoods, eh? The sweater turned out great. The colours are so yummy

What a darling little sweater! And the colors are perfect. Will this be for a little girl?

It is really cute. I have made a couple of hooded things and they can be tricky but once you get the hang of it not bad at all.

Those hoods, eh? The sweater turned out great. The colours are so yummy

Yes, I tamed the hoodie monster! Thanks so much for your help.

What a darling little sweater! And the colors are perfect. Will this be for a little girl?

This is for my first grandchild. Emma Lou was born the end of September. I knit her a newborn baby sweater, but she’s almost outgrown it. Time for a new bigger one.

She’s a beautiful baby and the sweater will look wonderful on her.

Thanks for sharing the picture of Emma Lou. She’s [B]so[/B] cute–well, better than cute, but I can’t think of the adjective to describe her.

Emma’s bald, but then so was my daughter when she was that age. She got one tiny curl on top of her head when she was a year old then a full head of curls after that. My daughter has been crocheting her hats to compensate. lol

Such a sweet, beautiful baby. I still like the lovely sweater but the baby wins the cute and sweet contest. Enjoy having a baby around.

Adding hoods to sweaters is a new skill I’m learning. Finally got it licked. Third time’s the charm. All that’s left is weaving in the ends and buttons attached.

The yarn was a delight to use. Joann’s Sensations Rainbow Classics brushed bulky acrylic in bright baby pastels. I loved the way this self striped.

Gorgeous job! I love this sweater. It will be perfect for Spring!!!

I’ve gotten some emails about this pattern. In order not to repeat PM replies, I’ll talk about the pattern here. I used this one as a base because I’ve only done one td baby sweater before and never done a hood. First time for that. I detest patterns. I will work one if I really like a pattern, but will usually try to figure out some way to make it easier to do next time, taking measurements as I go. I’m an unconventional knitter. I’m a knitting instructor’s worst nightmare. I never knit the technically correct way. I’m always making modifications, which I did with this one. I don’t like being chained to a pattern and like to do things in inches. My typical mitten pattern: Knit cuff for three inches. 2 1/2 inches to afterthought thumb, 5 inches straight knitting, and 1/2 inch for decreases. I often figure out my gauge, the measurements I need, and go from there. I think some knitters would call me a designer. I do my own thing. If I don’t like something, I change it. I was talking to somebody about a pattern, a balaclava. For the face opening, it has you binding off, casting on more stitches the next row, then later on picking up stitches. I told my knitter friend that I would do this like an afterthought thumb, putting those stitches on waste yarn and working the live stitches later. Anyway, you get the idea of my knitting skills.

This baby sweater pattern had a v neck. I didn’t like it so I made it a round neck. The original top down sweater pattern had the stitches marked off in sections, 1,8,14,8, and 1. I changed it to 7,8,14,8,7. I knit this with the increases at the appropriate spots and kept measuring across the back of the sweater at the underarm bottoms from seam to seam as I went. I times this by two for the front also. I increased until I got the proper chest measurements, which was 21 in this case for a 6-12 month size. I then knit straight until I got to the proper length, which was 10 inches from the underarm. I picked up stitches on the arms and knit them in the round, doing the decreases mentioned here, until it was 5 1/2 inches. I knit front button bands. I picked up stitches for the hood and knit it (with a 5 stitch garter border) until it was 7 1/2 inches tall, then did a three needle bind off to join the top.

This would probably make sense to someone like Olha, who I think does the same thing I do. To anyone else I say, break the pattern chain. Dare to do your own thing. Life’s too short to be chained to a line by line pattern. 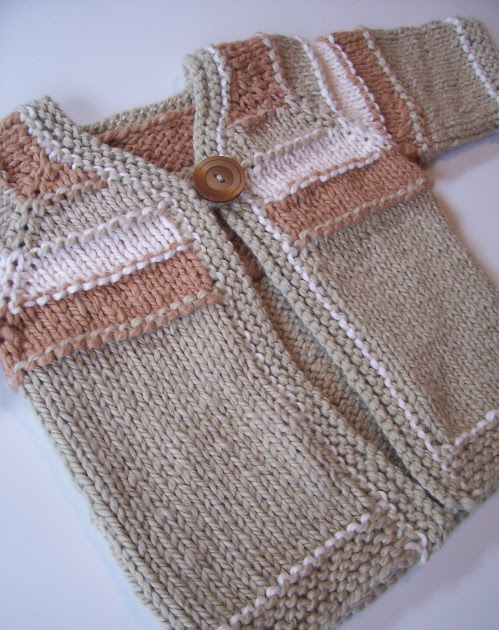 Once I started knitting this little baby cardigan, I couldn't stop. The color changes are worked on the wrong side, to accent the interpl...

Here’s another FO I did that doesn’t have a pattern. I’ve done these for so long that I know how they are basically constructed and I know my son’s measurements. This is my typical knit cuff for three inches, 2 1/2 to afterthought thumb, etc.