FO: A Raspberry Beret -- NOT from a secondhand store

I’d kinda forgotten about this one, but it was my first all-original design (or as original as it’s possible to be anyway). IT was also my first “solo” because I didn’t have my Kninja-Master girlfriend to bail me out if I got in trouble – 'cos it was for her and that’d spoil the surprise. It was at once exciting and terrifying. And educational. For example, I learned that:

[INDENT][ul]It IS possible to increase so much so fast that it becomes impossible to knit in Magic Loop.[/ul]

[ul]If you skip an “interval” in your decreases, you won’t wind up with the number of stitches you expected to.[/ul]

[ul]Plymouth Select Superwash Merino [I]rocks[/I]! But knitting two strands of it, you should [I]probably[/I] use needles larger than a US 9.[/ul]

[ul]If you work two strands together, you can do the easiest increase known to knitdom and it’s virtually invisible. Just knit each strand in the stitch and you get a 2:1 increase with the only additional effort being an extra knit stitch. And you can’t see it! (No, seriously, look!) Okay, you can see that there [I]is[/I] an increase, but it doesn’t leave a mark.[/ul][/INDENT] 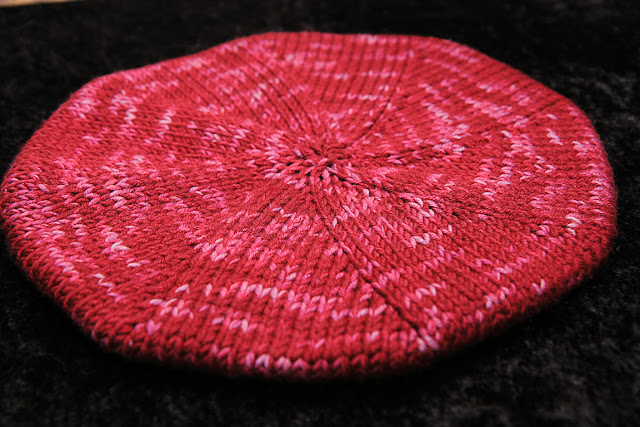 Like most of my hats, I did this one top down. I was trying to keep the very top part of the crown more or less flat until I had more diameter, and a co-worker (my backup Kninja) explained that if you double the number of stitches each time you double the number of rounds, you’ll get something basically flat. My ratios worked out that way, but it was really more of an accident than any kind of plan.

I CO 8 sts, divided for Magic Loop and knit one round even as a “foundation round”. Then in increased 8 sts in each of the first 7 rounds (yes, that’s [I]every[/I] round, and yes it [I]did[/I] get pretty tight). Somehow that worked out to doubling the number of stitches each time the number of rounds doubled. But it was an accident. It worked considerably better than my first attempt, however, in which I tried to double the number of stitches in EACH round. Have you ever seen a “dream catcher”? That’s basically what I had after about 4 rounds and the work was so tight I literally could not get the needle into the stitches anymore. Don’t try this at home.

Once the flat top was done, I started doing my increase every other round which is a little more reasonable. Once I hit 128 sts, I did about 4 rounds even and then started decreasing by 8 every round. (I wanted the line to cut in sharply at the bottom of the crown. I accomplished my goal.)

Now I wanted to do the band in garter stitch, though I don’t remember if there was a practical reason why or if I just liked the look. (Probably I liked the look so I [I]invented[/I] a practical reason for doing it that way.) But garter stitch is substantially wider than stockinette, and since I didn’t want the connection between the crown and the band to look like it was pinched off with a rubber band, I decided that I’d do two rounds worth of decreases in the first round of the band.

Have you ever heard the one that goes “the stories of most of life’s great tragedies start with the words ‘I decided…’”? Okay, so it wasn’t a tragedy in any real sense of the word, but what DID happen was that instead of the 72 stitches I [I]expected[/I] to have, I wound up with [I]74[/I]. And I had to knit essentially this same pattern 3 more times before I figured out why. Instead of p8, p2tog (which is where the next progression would have taken me) I did [B]p4[/B], p2tog. Somehow (I’ve forgotten the math, but it worked) that left me with 74 stitches, when two rounds of decrease would have left me with 72. Eventually I had to quit trying to find where I’d forgotten to decrease, because… I hadn’t. 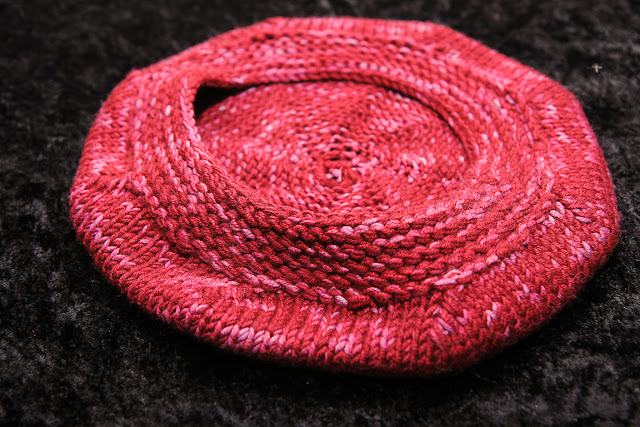 In the end, the extra two stitches didn’t hurt anything and – to my amazement (and despite my best efforts to the contrary) – the beret fit [I]perfectly[/I].

Thanks! I’ve only been at this for about … lessee… 10 months I guess, and this was from last summer (July I think) so it was quite the adrenaline rush. (Which is [I]not[/I] a phrase I would have ever associated with knitting before I started doing it!)

That’s a gorgeous hat!! I’m sure she will love it!

I like the look of KFB if they can be incorporated into the design. I have used them many times for raglan sweaters. And for the decreases or increases on hats I ALWAYS use markers. Makes remembering way easier. That’s another good thing about KFB…you can see which row you’re on very easy.

Yeah, I never knew knitting could be so… “exciting”. Actually, it was while I was working on this that I discovered KH for the first time. Amy actually got me through starting a piece in Magic Loop. The only time I’d done it before, I was working on something that had gotten too small, but I’d never done it from the cast on before. Of course I didn’t think of that [I]before[/I] I started, so there I was all gauged up and ready to go… with no idea how to start. There was a lot of that before I was done.

That’s a gorgeous hat!! I’m sure she will love it!

I like the look of KFB if they can be incorporated into the design. I have used them many times for raglan sweaters. And for the decreases or increases on hats I ALWAYS use markers. Makes remembering way easier. That’s another good thing about KFB…you can see which row you’re on very easy.

I didn’t use kfb on this version of it, thought I did when I made the felted models since they only used a single strand. this increase is actually just knitting each of the two strands as an individual stitch, and it probably has a real official name but I don’t know it. It makes a neat line, but you can’t see where the second stitch comes from. What you CAN see is where the next increase should be, but I didn’t realize this when I was making this one. So it was markers for me! Actually, I only used one and kept moving it after each increase. That way I could count back to the last increase and see where I was real quick.

And yeah, she loved it.

It was fun to read through your knitting saga, and to hear of your adrenaline rush.

Your hat turned out very nicely. I’m so glad to see you making things up on your own early in your knitting career. You learn so much that way and it is so freeing.

Gorgeous and in a warm rich color too! You designed and knit this beret beautifully. Sounds like quite the knitting adventure with a very successful outcome.

It is really cute and great color choice too!

It’s really beautiful! One of the nicest I’ve seen!!

Aww… thanks all! I was pretty stoked to have actually pulled this one off. The design is pretty elementary. It had to be – because it could only include stuff I already knew how to do (which wasn’t a whole lot). That was the reason I didn’t just go find a pattern online somewhere. None of the ones I found (that I liked) fit that all-important criterion. But writing my own pattern for this made it easier to understand what I was reading when I read somebody else’s pattern.

If I ever stop learning new stuff, it’ll be time to quit. But that doesn’t seem likely to happen any time soon.

Love it, but now I’m going to be singing that song all day! :whistle:

Love it, but now I’m going to be singing that song all day! :whistle: