Extra Extra Read all about it! Hero Kitty Saves Brother!

“Meow. I just didn’t want him to get hurt!”
–Stanley Spadowski, who saved Cheddar “Fatso” Biscuit from certain death by yarn lynching

So I’m up here in the computer room TRYING to get some work done (ie catch up on the posts I’ve been neglecting) when Stanley, my gray and white kitty, comes in the room just HOWLING his head off… I’m like “Oooh, kitty, whatsa matter???” And I get up to walk out of the room, and he’s trotting down the steps, stopping to make sure i’m flollowing him (like Lassie, but cuter and smarter, of course) and WHAT do I find in the living room, but CHEDDAR (the orange fatso) wrapped up and tangled in some pink acrylic yarn i bought a while ago but lost!!! Poor guy, he musthave stashed it somewhere (with my yarn needles, stitch markers, some solder, and an emerald earring) and decided that tonight was the night to get it out and play with it. Poor Stanley sat there and meowed the whole time while I snapped a few pictures and untangled Cheddy from the mess. When i untangled him I realized that he REALLY was tangled up, and might have gotten hurt: some of the strands were wrapped so tight that when I tried to pull he came scooting across the floow with them! But all is safe now. Here’s the pictures I took.

:roflhard: Looks like you should have locked the catnip up! It’s so cool that Stanley came to get you. Or maybe he was just being a tattle-tale!

He gets a parade! 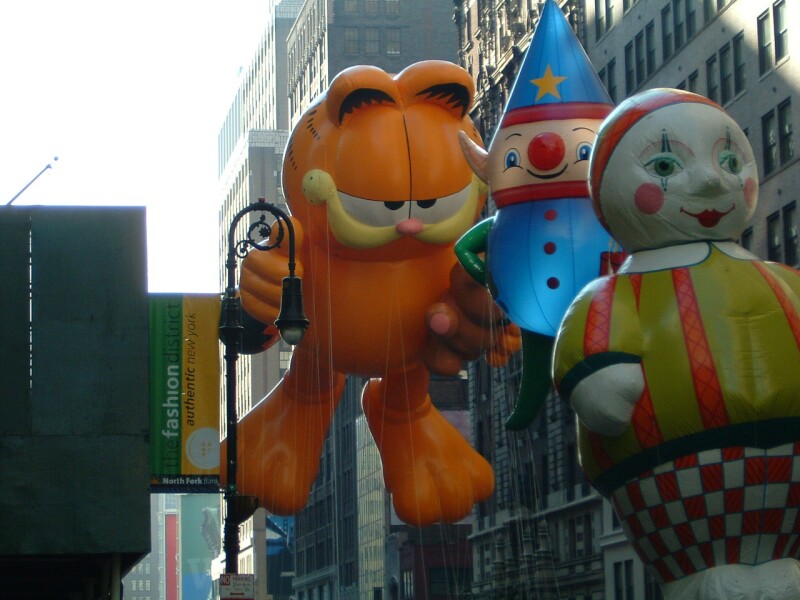 Yay for Stanley! meow What’s that? meow meow A schoolbus is hanging off the cliff? Good kitty! I’ll go get help. You stay here and lick yourself until its all over! :lol:

Ingrid, my original idea was going to be the “tattle kitty” angle, but KK announced stanley’s heroism before I posted, so I thought that was cuter

Looks like Garfield is a little “tied up”, too!

Wow! I read all about it! What a smart kitty Stanley is! Naughty (but funny) Cheddy! He seems sooo much like my Binky. He came running past the living room once with a large Target bag hanging off his belly by the handle, I’m glad he didn’t get hurt (bags are for supervised play and also his wakeup tool at 3 in the frickety am!) but I did laugh my head off at the site of him! DH had just had hernia surgery the day before and would have busted his stitches had he been in the room when it happened! :roflhard:
Mine will also grab the end of a roll of ribbon from a box I haven’t used in months and pull it all out until it runs from room to room and then he’ll lay there and look at me like “Look what I did for you mommy!”

Puppies are funny, too…

I guess when there’s no road kill to roll around in, you pick the next stinkiest thing!

My kitties have only gotten into my yarn once and I think my crying (they pulled out a ton of stitches) taught them a lesson.

My Gracie got tangled up in a plastic bag once pretty bad. She was so scared from being contrained and the noice that it made that she peed herself. I felt so bad for her!

LOL awww how cute!! Zulu enjoys when I knit has to be on my lap and tries to catch the yarn lots of fun knitting that way but when she looks up at me I just don’t have the heart to move her : )

My kitkat got her head stuck in a WM bag. Scared her half to death. We now don’t leave anything in a bag.

Isn’t it funny how the bag thing is common with cats?

Yeah, my kitties love to sit on plastic bags like they’re beds. I don’t like it because I’m a paranoid pet-owner, so I always pull it out from under them. I don’t understand why a sticky bag is more comfy than a bed or pillow!

mine too, both of them! Stanley is facinated with anything he can get IN… he sits in DH’s lunch cooler, empty laundry baskets, bureau drawers… god help us if we get a cardboard box in the mail, because not only will he sit in, on and under it, he’ll also bite it into shreds!!! Stanley likes to be IN things, close and cuddly, and cheddy likes to lay anywhere he can spread out in his glorious fattness.

cheddy likes to lay anywhere he can spread out in his glorious fattness.

[quote=Hildegard_von_Knittin]cheddy likes to lay anywhere he can spread out in his glorious fattness.

You’re perfect just the way you are!

The Binkster acts like if he can hide his head in something, you can’t really see him. He sits in 12 pack pop boxes, bags, coats, suitcases, laundry baskets, pillow cases, on top of doors, between floor joists in the basement ceiling, - when he was little, he got himself wiggled down the sleeve of dh’s winter coat, poked out his head and he looked like a baby seal.
But this pic has to be the oddest place yet… YES it was UNPLUGGED!!! :rollseyes:

p.s. i highly recommend browsing the book “Bad Cat”, I bought one but you can look it over and B&N, it’s hillarious pictures of cats and even more hillarious captions! You may be asked to leave the store if you laugh too hard! :roflhard: