Does this seem right?

I’ve decided to knit a sweater for my FIL for Christmas and I’ve found the perfect pattern: 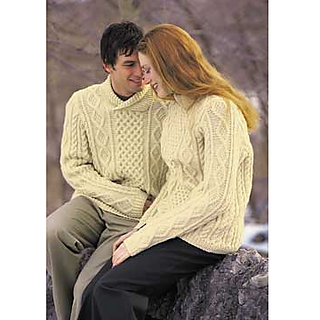 The pattern calls for Patons Classic Wool, but I want to use Knit Picks Wool of the Andes. Patons comes in 100 gram balls and Knit Picks is in 50 gram balls. The size I need to make calls for 11 Patons balls so naturally that would mean 22 Knit Picks balls, right?

That just seems like an awful lot for a small-ish sweater. He’s the same size as DH and the simple sweater I made him only took 10 balls of Wool of the Andes. Would the cables in this sweater really explain the need for [I]twice[/I] as much yarn? Or did Knit Picks make their balls smaller since November? They’re the same price as before so I can’t really see them being half the size they used to be.

Cables take up a lot of yarn so the pattern will eat up more yarn than the average stockinette pattern. I would buy whatever the pattern suggests. If you buy less and run out you run the risk of them not having the same dyelot if you have to buy more.

Personally when I buy yarn I always buy 1 or 2 extra skeins I’m sure I’ll have plenty of yarn and the right dyelot. You can always use extra yarn for a hat, scarf, mitts, cup cozy, etc. :lol:

Thanks! Since I don’t do much cabling, I just wasn’t sure if it would actually [I]double [/I]the yarn needed. I always try to buy extra too because I’m terrified of not having matching dye lots and I also like to save my swatches. According to this, I’ll need 22 balls but I’ll probably buy 24. Thankfully, Wool of the Andes is very affordable. It’s hard to believe that this time last year I thought I’d never knit a whole sweater and this will be my fifth!

Also compare the yardage in the 2 yarns… what’s in 11 balls of Patons may come out to 21 of WotA, or possibly 23. Always go by the yardage.