@amy Just letting you know I added this topic for you.

I’ll start! Five mini socks done and one on the needles. I can’t stop they are too fun!

My first knit for December, a bath mat set using pompom yarn. Sirdar Snowball.
I can’t believe how quickly this yarn knits up, it was delivered yesterday morning and here they are all done

Thank you for posting, I’d forgotten all about this.I’d intended making one for my little g’son some time ago, now he has a younger brother who is almost a year and a half old!!

Wow, you are fast. Look wonderfully soft and fluffy.

OMG that is adorable, @salmonmac!! For a grandchild?

Still on my socks and blanket squares… waiting on starting a sweater until I finish my blanket because I want it done! But I have no desire to work on it. My socks are almost done!

They are very soft and squishy and anyone can be quick with this yarn - once you get used to knitting with it (that took the longest,lol) The big mat is just 40 sts. long by however wide you want it (56 rows for mine) practically a swatch in some yarn weights !!

Thanks @Jan_in_CA, yes, for Jack who is now walking. It’ll fit in a year or two.

@notknittingknots do they stand up well to use? I only have 1 bath mat (!) so am constantly washing it and having to use towels until it dries!
I have an AFO (almost finished object), one crochet not-so-mini stocking - it was supposed to be mini but I used a chunky yarn and hook so now it’s big enough for some candy canes to go in it, just needs to be sewn together and a couple of pom poms added. Need another quick project to do for the weekend as this particular parcel needs to be posted on Monday, only got notice of this earlier this week so a bit “panic stations” here at the moment! I think perhaps another snowman as I now have small, sharp needles for him so he should go easier than last time (last set were a cheapy pair of bamboo needles that I had sharpened with a veg peeler and smoothed down with a knife sharpener - but I was a bit desperate!).
Other than that the Springbok hat’s had a few more rows done on it, the Minions hat will go on the needles this weekend as it should be quick and easy. (I hope!) Another 2 stockings will be done, and then another 2 little decorations for the people who need theirs posting. Then I have until Christmas Eve for the plane, doorstop and 2 hats.

Finally I came home with some yarn yesterday - it wasn’t intentional, I’d gone to exchange a rough, circular cable, but they didn’t have one so I swapped it for some yarn instead:

Photo doesn’t do it justice, it’s very reminiscent of the sea/ocean with turquoise colours, so the plan is for a C2C beach blanket.

Whew, you are so busy but with such an organized schedule! You have all my admiration.
Love the colors of the new yarn.

if I do this again next year I’ll be starting in September!
I’m just

with this yarn, here are some better pictures:

@Evie I use these for bathmats. Quick dry and cushy. They probably have something similar in the UK. https://www.bedbathandbeyond.com/store/product/microdry-reg-ultimate-luxury-softlux-trade-memory-foam-bath-mat/3295239?categoryId=1343I5

Do you have Mason Dixon Knitting? They’ve got a bathmat called Absorba the Great that looks neat. Not sure it would dry very fast though.

I’ve always wanted to make a actual rug though. I’ve got a few places in the house I use throw rugs.

Thanks Jan, however the price of getting a couple more bathmats is prohibitive for me (the one I’ve got was bought for me by my mother!) as I live on a very low income - around $1140 a month - and around here bathmats can be a minimum of £10 which I think is about $15?

I understand. Just wanted to show you a good one for the bath. A knit rug could serve the same purpose. I wonder if using microfiber yarn would make it dry faster like the purchased one? Hmm…

Ohhh…this one is cool and it uses up fabric scraps or you could use yarn. Might have to try this. I have the book, but I’m not sure you’d really need it. 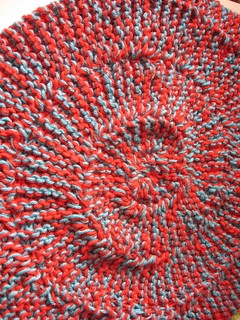 Sorry, that came across a bit sharp, it wasn’t meant to! Having said that, pom pom yarn is soooo expensive!! Every where I look it’s about £10 for 100g! Cheaper to save and buy a bathmat

No problem! You were fine. I also don’t mean to sound braggy when I post things that you can’t afford. I’m also mindful of you being in the UK and me the US. Availability is always an issue.

Didn’t sound braggy at all! When I was working it wouldn’t have been an issue but social security seem to think you can life on peanuts

besides I’m lucky enough to own my house outright so money goes further (generally on wool!!).