Hello! I just bought this pattern online only to find out that the pretty cable is not included in the instructions…the scarf is knit using the fisherman’s rib and I’ve been obsessing over figuring out the cable in the picture! Does anyone know how to knit this cable? Thank you!

What is the name of the pattern? It would help tho see more of a picture and we can see if it’s on Ravelry.

ETA: Are you sure that’s an actual cable and not just the way the pattern is arranged for a photo? I’ve never heard of a pattern skipping an important part of the design.

That said… do you know how to do cables?

I got the pattern from ravelry! Here is the link: 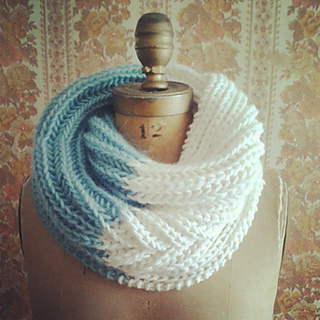 Happy Thanksgiving. Get 40% off any knitting patterns or eBooks in my Ravelry store through Nov 30, 2015 with discount code WHYKNOT at checkout here at Ravelry.

I do know how to knit cables but have never done any like this. I’m pretty sure the picture has a cable in it, which is why I chose the pattern. There are other pictures on the page that don’t look like they have cables in them, though…Thanks!

Such a pretty scarf/cowl! I found the answer…others must have asked, too. What looks like a cable is just the drape as I thought. If you would like to make a cable you probably could by crossing several of the ribs. It will pull in at the edges of course, but that could be a design feature.

I shot some additional photos to demonstrate various other drapes you might try when wearing it. My favorite look is the original drape I used for the cover photo, but this is a versatile piece and may be worn in a variety of ways.