I fell in love with the Coral 2 Stitch on the knittingfool site. For the life of me, I am not able to figure it out. I count the stitches in the written directions, as well as on the graph and they seem to be wrong; it reads a multiple of 18 stitches plus 5 stitches. With one pattern repeat, first row reads 37 stitches, second row 41 stitches, and so on. I tried working up a swatch and it was wrong. Is there anyone here that can assist me? I am perplexed.

Hi and Welcome. Here’s the linkto the pattern stitch so others can find it too.

It’s counted a bit odd, but try reading it as the last repeat of the repeats isn’t done the same as the other ones. The YOs don’t use a stitch, so you do use 18 sts in the repeat, 7 sts before it and last repeat ends with ‘k2tog, k5’ instead of 'ssk, k9.

Thank you Sue for responding so quickly. I love this stitch and really want to use it in my project

I cast on 41 stitches for my swatch. I followed the “Begin Row” instruction for Row 1, did one pattern repeat, and then followed “End Row” instruction. I am now left with 4 cast-on stitches on my left needle. I just don’t know what is wrong here.

Beautiful pattern stitch!
Cast on 37sts for your swatch. The first row uses 37sts and ends with 41sts.
The rows alternate, odd rows 41sts total, even row 37sts total if you do one repeat across. The center stitch repeat changes too: odd rows 20sts per repeat, even rows 18sts per repeat. I’d just give it another try, counting sts after every row to make sure the row ends with the correct number. If the pattern looks off, you may need to go back and name the stitches across the row to check for a missing step.

So I had decided after a couple of tries to let the four cast on stitches drop off the left needle and Voila! I am on row 5 and it looks to be successful. I am wondering if it may make sense to begin with Row 12 of this pattern stitch. I do love the pattern and am excited because now I will be able to use it. This is a great site! Love, love, love it

I would probably start with a 37st knit row and thne keep repeating the pattern rows 1-12. You can start with a row 12 (after all repeat #2 will follow a row 12) but remember that you’ll need 41sts to do a row 12 which will end with 37sts, perfect to start row 1.

Thank you for your reply. Working on this stitch pattern in between assisting my husband install cabinets in the laundry alcove :cheering: Up to Row 9 now; when I do my actual project my cast on should be a multiple of 18 stitches plus 1 stitch. Does this seem right to you?

The pattern stitch instructions give it as a multiple of 18 plus 5. I’m not sure how they figure that.
In order to start row 1 you need to cast on 7sts for the beginning + 18sts for the repeat + 12sts for the end (37sts total). So I would think 7sts + some multiple of 18 + 12sts.
I’d try it out on 2 repeats of the pattern just to see how that works out.
Sounds like you have your hands full!

I wrote knittingfool and told them specifically about the issue that I had with the instructions showing a multiple of 18 stitches plus 5 stitches. In the email I received I was told to refer to a blog entry, address here: 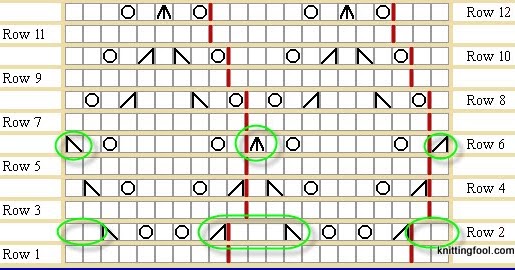 Lace Patterns That Don't Seem To Work Out Right

I had an email yesterday from someone who thought that the Coral stitch pattern had an error on Rows 2 and 6.  Specifically the writer indi...

The blog does not appear to answer the problem, maybe I’m not reading correctly. Will you look at the blog and tell me what you think?

Yes, there are shared elements in lace patterns but I’m not sure that helps with the question of the cast on. I’ll take another look at the chart when I get home.

I still don’t see the 18+5 until you finish row 1 which ends with 41sts (18+18+5).
For the cast on, once you have one repeat plus the begin and end sts (18+18+1), the additional repeats are +18. So you can make this pattern as wide as you’d like. Good luck with it and with the laundry cabinets. Love to see a photo of the finished knitting (and ok, the cabinets too).

This poor house. When we moved in the laundry alcove (3 1/2 by 5 1/2 feet, bifold doors) was wallpapered, full of holes, ugh. I’ve stripped the walls, painted, put up a wire rack shelf. Picked up cabinets from HD, nothing fancy, but provided sorely lacking and much needed storage space. My husband came home from work today and opened up the doors and admired

Recently my husband and I were returning from a weekend in Kitty Hawk, and although this particular yarn shop was supposed to be closed, it was a Monday; but it happened to be MLK day. Well, I thought we could just pop by and much to my delight, they are open on holidays. I found a book by Maggie Jackson, Maggie’s Ireland, which has directions for her Ballyconneely Shawl. I had seen pictures of it online and love the shape of the shawl, different stitch patterns worked into rectangles and put together. I plan to use stitch patterns different from what she has used (I lean more towards ruffles and lace), and am excited about the project. My most recent project has visited the Frog Pond and has begun resurrection as the first rectangle.

So, I have begun :knitting: I cast on 79 stitches, marking off 3 at the beginning and end of the row to work in a seed stitch, and have knitted 2 rows of the Coral 2 stitch pattern. I pray, no more frogging. I am admittedly winging it as far as what stitch patterns I will use in this project, when one square is finished I will look at it and figure out which one I would like to use next. Scary and exciting at the same time.

Thank you again for your help. I will send you a link when the project is finished, until we speak again, Happy Knitting

I’m jazzed about the Coral 2! I think it could make an interesting scarf or baby blanket!

Well, here’s what I think, after spending an hour with this pattern stitch:

But adding another span of the pattern stitch is beyond me. I don’t think you cast on 37, place stitch marker, cast on a further 37.

Tomorrow I’m going to print another chart or two and do a cut/paste together for a double wide span of pattern stitch and see how it looks.

Simply casting on 37+37 for a double wide version is going to look wonky where they meet in the middle, I believe.

There is a piece to this puzzle that we’re all missing, and the webpage is
keeping the secret to themselves.

Mystery solved! The cut and paste worked. I got the picture.
(I stand by my first impression. Forget the 'multiple of 18 + 5. Bah!)

These cast on numbers don’t include edge stitches.

For the four motifs wide, your Row 1 would look like this:

The ‘repeat area’ is designated in the written directions here.
Of course, the repeat area instructions change as the rows progress. I’m only discussing the very first row of the repeat. But if you print a chart that I’ve suggested, you’ll be right on track for Rows 2-12. The chart won’t steer you wrong, or be confusing. If you’re not a chart knitter, now is the time to learn to work from a chart.

Will take a photo of my cut and paste modified chart later.

Okay, I’ll try to upload a photo from my Android phone. Tape the pieces together, for whatever number of repeats you need. This modified piece below adds 2 repeats to the total, or two additional motifs than the original chart. Note> on the far right is the original chart…partly covered over…then the two extra pieces are taped on the left:

Here is the original chart, but I’ve color-coded the symbols for easier knitting.

I hope I don’t get into trouble for posting these modified charts to help us understand how the repeat works.

Hereis the original link to the webpage that features this old pattern stitch. You can view the written there, and if you sign up and join , you can view the chart key that unlocks the meaning of each symbol.

All in all, it’s a great website. They have a sweater generator, that works much like The Sweater Wizard software.

:woohoo: Just checked the knittingfool website and Coral 2 instructions have been changed to reflect a Multiple of 18 stitches plus 1.

:woohoo: Just checked the knittingfool website and Coral 2 instructions have been changed to reflect a Multiple of 18 stitches plus 1.

That checks out with my stated cast on numbers!

So 18+1 is the correct multiple. Good grief. Talk about a hassle, eh?

Aha, so much for all that blog on sharing between repeats! That’s very good and very reponsive of them. Someone is watching and listening. Well done.
Dollyce, beautiful charts and very helpful. Perfect illustration.

:shrug: Oh well, I was looking on the knittingfool site for my next stitch pattern, noticed they posted a new picture that is NOT the Coral 2. They got the number for the cast on stitches corrected and at some point today put up the wrong photo. My husband told me I need to quit trying to help them :doh: