I’m having trouble understanding what ‘6 sts’ the pattern means for the new marker to be placed? I’m sure that this is a simple question just want to make sure I’m not going too far into the pattern and messing it up. Thanks for your help!

Hi and welcome!
You need 6sts to work the k1, M1p, p1, M1p, [k1, p1] twice. Stop when you get to 6sts before the marker.
Is this the instructions for the entire row?
How many markers do you have on the row?
What is the name of the pattern?

Thanks for responding! Silly follow up… doesn’t that get me 8 stitches by the end of that with the [k1, p1] twice? Or it doesn’t matter, and I should just put the marker after I reach the 6th stitch?

It’s a capelet called Essex by Berroco. That’s it for this row, it’s the first increasing row after the collar.

You will have increased 8sts by the end of the row because of the 4 M1p increases.
These increases don’t use a stitch. You’ll have the k1, the p1 and the [k1p1]x2 for 6sts. The increases occur between stitches.
Check the pattern instructions and see if the M1p isn’t defined at the beginning.emphasized text

Ok wonderful, so I’ll just finish each portion of the row and put the markers where it says to (after the first half [k1, p3], and after the last [k1,p1]).

Thanks again for walking me through this! 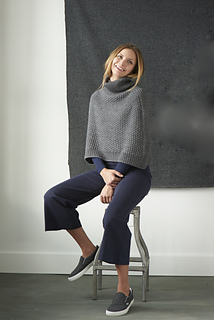 This sophisticated capelet is knit in one piece from the top down with a generous collar. Lovely granite stitch is offset with rib side panels.

I’m back - sorry, so now that I’ve done the whole row (120 sts originally), it obviously doesn’t align with where I originally started. Do I finish the Rnd 1 pattern (which will go into Rnd 2) or stop short?

You had 120sts before you worked the increase round? I’ll give it a try.

Yes, so the cowl was 120 sts ribbing, and now the pattern calls to start
increasing for the actual capelet part. Thanks for putting so much time
into this!

Since the pattern has 4 increases between the asterisks, the pattern should continue to work and end having completed a full k1p3 sequence. Count the stitches after the first round and make sure you have 4 more sts between the markers on front and back (8sts increased total per round ones).

The cape has a stitch pattern that takes several rounds to appreciate but the edges have a rib p1k1 pattern. See this in the middle photo on this project.
https://www.ravelry.com/projects/TulaBell/essex

Ahhh ok that makes more sense that they would double that too. Ok
wonderful! Thanks again!

Ok, so promise this should be the last time just want to triple check
before getting too far in… If I were to write out everything it would
technically look like:

I’m still a little thrown off about the 6 sts but I’m hoping it’s just
describing something I’m not picking up on at this point.

I’m supposed to do this for the full original 120 correct? Or stopping
after repeating the whole pattern?

HI, ok I’m an idiot finally had my ‘aha’ moment! Thanks again for your help!

It’s just so exciting when that happens! Good luck and enjoy making the cape.

A post was split to a new topic: Confused about pattern