Hello! I’m after a little bit if guidance really. Started learning to knit after many failed attempts over the years, learned to crochet in lockdown and haven’t looked back really. Got bored of it recently and thought I’d try to knit again. Success! !

Some swatches made, then two hats and a baby cardigan for my daughter. Feeling more adventurous so I took a look a look through ravelry for free patterns and fell in love with this one 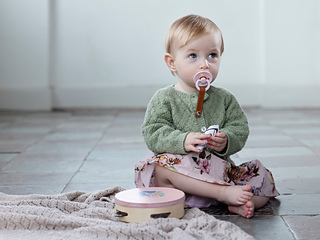 Here is a much underplayed circus theme. Just like in Crispin, the subtle harlequin pattern appears, creating a classic baby and children’s cardigan that can easily be used for both girls and boys.

When on the RS Do you do the increases then start the pattern again (6 stitch repeat) or do you remember where you left off and then carry on?

I’m sure it’s all pretty obvious but I am stumped. Ive ripped it out and started again as the pattern wasnt showing so i had clearly done something wrong! Intend to put in a lifeline after the set up row so I have something to go back to at least!

Many thanks if you’ve read my ramble! Photo attached of the cardi I managed which made me think I could work this out!! Adventurous beginner!!

Welcome to the forum!
Darling sweater on an adorable little girl.
Row 1 has set the placement of the purl sts which form the lattice or harlequin pattern. In row 1 the purl stitch is the 4th stitch in the chart. You’ll continue that pattern on row 3 of the chart with purl stitches as the 3rd and 5th sts as given in the chart.
You can work the increase as a knit stitch but when you come to it on the next row work the increase into the overall pattern stitch for that row. Look at the previous rows and determine whether that increase stitch should be a knit or purl in order to keep to the stitch pattern without a jog. The pattern stitch will be adding a stitch on either side of the markers.

Yes, when the pattern says repeat rows 3 and 4 it means to repeat the increases not the chart for rows 3 and 4. It’s a bit misleading there.

If that’s not clear, just come back and ask. Keeping in pattern is a skill that takes “reading” your knitting and it is confusing at first (and sometimes at second too).

Thankyou! Yes those increases were a new one on me! I’ve only done yarn over ones so far so I watched a quick tutorial for the M1R and L and was so pleased I had that down I think I lost my way

So once I’ve done the increase

It says follow pattern to marked stitch then M1L, kn1, M1R all good. It then says repeat so do I go back into the pattern from where I left off? Or start it again for that section back/sleeve/front

Does that make sense? It’s a 6 stitch repeat so if I’ve done 12 then the increase then I would start a new one after it but if I’ve done 11 do I do the final stitch of the 6 repeat on the other side of the increase before continuing on.

The make one increases are nice and quite similar to a yarn over increase where you work the stitch tbl on the next row.
Row 1 sets the pattern for you and you should refer to that after the increases.
1st row (RS): K5, p1, k5, p1, knit 0 (1) 2 (3) sts, M1L, k1 (raglan st), M1R, k4, p1, k5,…
I’ve bolded the pattern after the first increase row to show you the way the designer deals with the pattern stitch after the increases. Continue that pattern. Don’t start over again or necessarily where you left off. You may not get to complete the 6-stitch repeat either before or after the raglan increases.

Thankyou for your patience!

Right still trying to get my head around it (sorry!)

So in row 1 on actual chart pattern starts with k3 p1 k2, I get that once I’ve done the p1 then it’s k5 but the written instructions start the row with k5 which is throwing me off. It’s like it’s started on the 5th st of the row then continued on

So then I’m not sure how I would start the 2nd row as it row 1 will end on a k5, so when I turn it around for row 2 I’ll need to do 5 again so not starting on the edge of the chart. Am I being dense?

Sorry again, not dealt with this kind of pattern and can usually muddle on through!

This can be confusing but there are often charts that start partway along. There are even patterns where different sizes start at different stitches.
Think of it as starting mid-chart with sts 5 & 6 and continuing with stitch 1,2,3 and so on. It seems odd but it’s just a matter of getting through these first couple of rows. Then the pattern will settle into some beginning sts, and a repeat of the 5-1 pattern.

If row 2 begins with p5 then that establishes the pattern across the back, p5, k1, etc. Another way to look at this once you have worked row 1 is to read your knitting. When you see a bump facing you, purl it; a V facing you, knit it. That will maintain the pattern. Luckily this pattern is written so that the wrong side rows are the same overall pattern as the right side rows. The changes are all on right side rows.

What a perfectly lovely cardigan and your daughter is simply delightful. One key thing I have learned is to go slowly and be patient with yourself. Two things that were difficult for me, personally, to begin with but am now actually doing and reaping the benefits in both my knitting and my day to day.

I am looking forward to seeing your finished Lille Crispin!
Claudia

Thankyou! I’ve never encountered a pattern like it before, very used to crochet where it tells you every little thing so it’s confusing me!

Guidelines rather than rules! I’ll have a go when bubs is in bed and see.how I get on.

I’m sure I’ll be back at some point!

Yes, definitely sometime and place without distractions. Like so many patterns once you get through the beginning rows this will be much easier to work.

Ok! I think I’m ready! Baby is napping and I set the pattern row last night.

One more question… on the first ws row after the all knit row it says k1 (edge stitch) start and finish of the row.

Should I do an edge stitch on all the rows? Or just the WS? Or not worry about it at all… It’s not mentioned again and I’ve just noticed it.

If I’m doing it on all the rows is it always a knit no matter what side your working?

Just wondering if it’s like that to make it easier to pick up the stitches for the button bands (something I’ve also not done previously!)

You’re right, the reason for the k1 edge stitch is probably for ease of picking up the front bands. It would be worked on all rows. Some patterns have it knit on all rows but working it in stockinette (knit on the RS, purl on the WS) seems to me to create a line of Vs that are easier to pick up sts from. It’s basically up to you.

Perfect thankyou so much! Hopefully my next post is a progress shot with actual progress!

Just thought I’d pop back and share the progress so far.

I think it’s going ok so far!
Thanks again for the help

That looks beautiful. You’ve got it going nicely and now you can see the pattern developing. I love the color you’ve chosen too. Looking forward to more photos.

I’ve just reached the end of the increases for the yoke and I just want to check I’ve got the gist of the dividing on for the body.

Also all the tutorials for the M1T show just doing 1, so am I literally making 3 new loops straight onto my needle and then carrying on. So it’s adding 3 to each edge of the back. Presumably so there is no gap in the pattern?

This kind of backward loop will work here since it’s just a few sts. Yes, you’re adding 3 of those loops to the needle. Those extra stitches will add a bit of fullness to the body of the sweater at the underarms.
The pattern should continue without a jog over the cast on sts which join fronts to back. (If you find for some reason that the pattern isn’t aligning, you can always adjust that number of cast on sts so that the pattern stitch continues seamlessly.)

Thankyou! Stitch count was right luckily so no jiggery pokery required and all divided up perfectly

Onto the body now while baby naps. This is the easy bit now I guess!

Excellent! I love patterns that are so careful about critical but easily overlooked details. Enjoy!

Just thought I’d pop back with an update!

Body is finished! Just about to start on a sleeve. I’ve done magic circle before on a hat when it got too small so fingers crossed I can keep it looking nice and tidy!