Will cables look odd when worked with a varigated yarn? I have some pretty varigated but the pattern I’m looking at is cables and it just seems like it would look off.

IMO cables lose something when done in variegated yarn. They pop much better in a solid, heather or tweed.

I think variegated and cables can be a bit busy and you don’t get the best effect of either. If you like the cables in the yarn you have, then go for it. Aside from personal taste there are exceptions to every rule.

I think it depends on the color range in the yarn. I’ve made some lovely cabled things with yarn that was variegated in the same shade. If there are lots of colors in the yarn, the cables may get lost.

Try it. You can always take it out if you don’t like it.

I agree, if its a soft variegation it can still be pretty. If it looks like a parrot or is really bright then it might not. You could look up the yarn on Ravelry and see if anyone has done cables with that color. What is is the yarn and color?

I think it all depends on the colors in the yarn and the size of the cables. And how much you want the cables to pop. For the green mug cozy I made a few years ago, I think the yarn was a poor choice. But the more muted colors in the one I just finished looks quite nice, IMO.

Oh, yeah. The They almost look like they were made from different patterns. When I think variegated yarn, I automatically think of more contrast between the colors, I don’t know why.

The more separate brightly colored variegation is what I was thinking, too. These soft variegations work quite well.

The more I look at the green mug cozy, the more I like it. It’s somehow mysterious and draws me in to try to work out how the cable pattern and the variations in color work together and yet make separate patterns of their own. It makes me think of ancient ruins covered with lichens, moss, vines, etc. I think I need to try one with some green variegated I have. I love having my preconcieved notions smashed to pieces! Thank you.

Yeah, I thought both mug cozies were OK, but I like it that the glazed variegated yarn in the second one doesn’t compete with the cable. When I’m pairing variegated yarn with a cable st, I always swatch.

Cables are funny creatures! I recently started a cabled hat using heathered yarn, and it [B]did not[/B] look good at all! The cables didn’t really stand out; instead, they looked like unsightly bumpy ridges running up the side of the hat. Needless to say, I frogged and went with a plain ol’ hat!

So it’s all about the cable pattern and whether [U]your[/U] yarn works in that pattern. That means you’ll need to swatch it and see what you get!

Some variegated yarn is dyed so that the outcome is very powerful. Others are very muted, and knit up almost tweedy. As a rule of thumb…I [B]either [/B]use cables as the ‘design element’ [B]or[/B] a variegated colorway as the design element…but [B]rarely both[/B] within the same project.

I like dancejunky’s two cabled mug cozies very much! The lighter variegated yarn played nicer with the cable. The green was okay too, mostly cuz that [B]cable itself was powerful[/B], occupying most of the cozie real estate

But using her green-variegated for a highly cabled sweater would be disastrous. You wouldn’t know what to look at…the colors, or the intricacies of the cables.

Generally speaking…within the same project…[I]
…they say[/I] that variegated yarns and cables fight for attention, and they both lose in the struggle.

Here is an example of a phone cozie that I knit up…using my own pattern…using a few yards of leftover yarn…see how the celtic cable is swallowed up by the variegated yarn? I knew full well this would happen…but I didn’t care for this small little cozie…but I would never ever do this for a garment.
I threw in the celtic cable just for fun, last minute. Here’s another example…of a more [B]subtle[/B] variegated yarn…I used this leftover yarn
for a cabled hat and scarf pattern. It worked out great! Here’s how the same yarn played out on the pullover…it quite seriously ‘striped’…
and I’m not so sure I would have liked this yarn with cables. Cable interest usually
runs north-south…and the striping of this yarn definitely travels runs east-west. [I][B]A fight. [/B][/I] Now (below) here is another scarf I knit up using leftover yarn…to wear with the cardigan.
It’s a reversible brioche cabled scarf…and it looks much better with a solid yarn. Much.

See how the wavy north-south traveling cables are fighting with the east-west striping
of this yarn? [B]Overall design rating…it’s a disaster.[/B] But it suits what I wanted it for. Another KH knitter had done this same brioche scarf in a Malabrigo semi-solid blue…and it was spectacular!

I love the hat and scarf set. Does heathered yarn count as variegated? I used some gray heathered yarn for this dress for my daughter. Before I started, I made a swatch with every cable I intended to use in the dress, not only to check the gauge but also to make sure I liked the cables in that particular yarn. 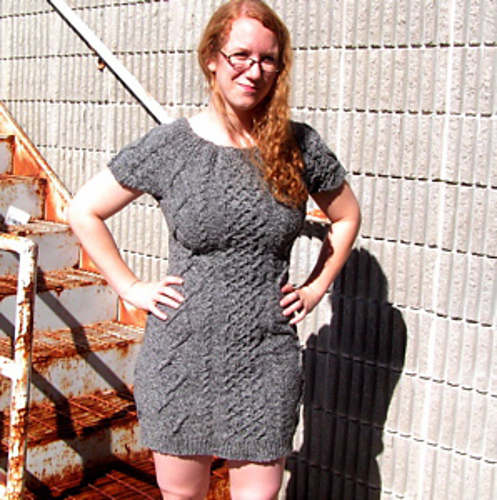 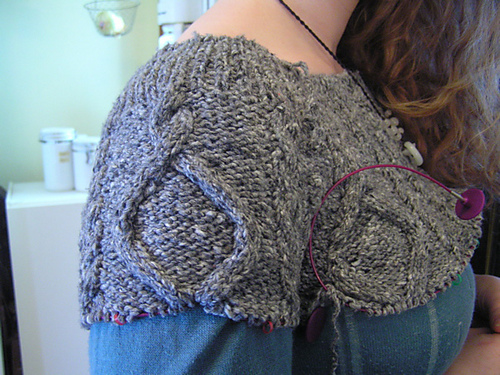 This kind of tweed yarn works very well with the aran pattern. It seems to be in the spirit of the original arans. It’s a gorgeous dress and worth all the time in swatching out the cables. Looks fabulous on.

I agree with Salmonac! The tweedy heathery grey was perfect for the dress! No conflict of visual interest whatsoever! You’re an excellent ‘process knitter’, taking time to get things just right. You really do your pre-knit-work!

Thank you for your comments. It was certainly one of my more ambitious projects. The pattern was for a plain top-down sweater, so I lengthened it, added cables all over, and had to do a lot of head scratching to figure out the best way to add fullness in the bust and skinnyness in the waist without disturbing the cables. Hint: I did not change needle size to accomplish that.

I love a challenge!

Now I’m even more in awe. The shaping is divine. What did you do?

Now I’m even more in awe. The shaping is divine. What did you do?

Math. And fittings. I first took Nina’s measurements: bust, shoulder width, upper arm, waist, hips, and back length. I made a swatch with cables included. Because Nina wanted the dress heavily cabled, I just had to add up all the stitches in the cable charts and then add reverse stockinette stitches between cables until everything added up to her upper bust measurement. As I worked my way down the dress, I used the fields of reverse stockinette to do my increases and decreases, guiding the width of the fabric to match Nina’s measurements. Periodically, I had Nina try the dress on to make sure I was on track and could go forward to the next section. At the hips, the dress was flaring out a bit, so I had to frog 2 inches.

Nina wanted a very cabled, close-fitting dress (2 inches of negative ease, I think), and she’s very happy with the result.

P.S. Adding/subtracting the same number of sts on either side of a cable keeps the cables in a straight, vertical line. I needed to avoid any bowed-out lines in the bust, which would make her look bustier.

For a project like this, there’s really no substitute for swatching and math.