Buttonholes for the math impaired

GrumpyGramma decided to knit a cardigan sweater and is now ready to make the eylet buttonholes. If GrumpyGramma has 123 stitches on her needle and has decided to use seven buttons, how many stitches will she need to make between buttonholes?

I know there must be a fairly simple way to figure out buttonhole placement even for the mathematically challenged such as I. A link to somewhere that tells me how to do it? I usually end up laying the buttons out as I think they should be, then count stitches and adjust until I at least think I have it right. I would appreciate any help in learning how to figure this out.

Well yeah, you would place the buttons on the edge of the sweater, then measure from center to center to see how far apart they are, then make the holes the same distance apart. 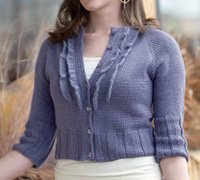 How to place buttonholes evenly - Interweave

Usually the top and the bottom buttonholes are close to the top edge and bottom edge of the buttonhole band and then the other buttons are evenly spaced between. Eunny Jang has a neat trick where she cuts a strip of paper that is the same length as the length from the top button to the bottom button. Then she folds and uses the creases to mark the other buttonholes. (You can fold as many times as you need to for the number of buttonholes you’d like.)
http://www.knittingdaily.com/blogs/daily/archive/2011/06/17/how-to-place-buttonholes-evenly.aspx

Another neat trick I read about (Lily Chin, I believe) is to use a piece of elastic and mark off the buttonholes on it (without stretching it) every inch or so (I suppose any measurement will do as long as you stay consistent and make sure you leave enough room to get all the buttonhole marks you need on the elastic). Then stretch the elastic to the proper size and mark the buttonholes on your band.

GrumpyGramma decided to cast on some stitches and just start knitting.

I’ve done a drop shoulder from the bottom up. It has kangaroo style pockets, seed stitch bottom band and I’m binding off the seed stitch buttonhole band. I’ll do the button band and then decide about the collar and last of all I’ll do the sleeves. Unless I try it on, decide I don’t like it after all and frog the whole thing. It’s pretty simple really, but I think I got the short row shaping on the front right.

Another neat trick I read about (Lily Chin, I believe) is to use a piece of elastic and mark off the buttonholes on it (without stretching it) every inch or so (I suppose any measurement will do as long as you stay consistent and make sure you leave enough room to get all the buttonhole marks you need on the elastic). Then stretch the elastic to the proper size and mark the buttonholes on your band.

This is interesting. I think I understand how it should work. I’ll have to see if I can use it sometime.

Will you do the top-down, seamless, set-in sleeves?

Will you do the top-down, seamless, set-in sleeves?

First, will I do sleeves? I dunno. I have to get past trying it on after the front bands are done to see if I’m going to go on. If I don’t frog it then I’ll decide whether to do sleeves. I have lots of yarn so that’s not a deciding factor. I’ve thought about doing a seed stitch band around the armholes and just leaving it sort of a cap sleeve. If I do sleeves I’ll pick up and knit them in the round, so I think that means they’ll have to be top-down.

I’m thinking a shawl collar but the only one I’ve done wasn’t one I want to do again, I have to do some looking and learning to see if there isn’t another way to do it. That one involved picking up stitches along the back of the neck and then casting on stitches later to extend the length of the collar and seaming the thing at the end. I want to avoid seaming. I’ve knit front and back together, no side seams, and used a 3-needle bind off for the shoulders. I do have to seam the sides of the pockets–for the bottom I did kfb and held the pocket sts on a holder till I got up as high as I wanted the top of the pocket, went back and knit the pocket and then k2tog to join the pocket sts back into the body of the sweater. I need to see how to pick up a stitch on the front of the sweater at each end of a pocket row to knit it into place as a I go. I saw something about patching a sock heel that involved using a stitch from the sock and think that method should work. Next time.

(Yes! we are! Thanks for asking. You got me started and Ididn’t want to stop.

I got a Tunisian crochet hook from KP to go with my interchangables and used it to pick up stitches for the front band. Love it!

It made it quicker and easier for me.