I have started work on this pattern, but I am stuck at the Instep where it starts with SL 1, I am assuming that means, slip one. But then it goes on to say to repeat from last row till you have 14 stitches on either side of the instep…sorry, but I do not know what I am looking at here, I was hoping to figure it all out when I got to the end!
When it says slip one, I just keep slipping the same one (since it says turn…) and it starts looking really funny. I created a mess so I have just taken the entire thing apart and awaiting an answer here to continue from the instep.
I can say, I am getting plenty of practice tho!

Here is what the pattern says starting with the instep.

Repeat last row until there are 14 stitches on either side of instep.

You are doing short rows here. In other words you don’t knit all the way to the end of the rows, just as many as it says and then turn like you would at the end of a row and begin knitting in the other direction. You are doing something sock-like here.

The first row you knit 34 and then k2tog but don’t go any further with that row. Turn (in other words exchange the needles from one hand to the other like you do at the end of a row).

The next row you slip the first stitch that is on the needle in your left hand to the right hand needle, then k8, and k2tog. Then you turn again to work in the opposite direction.

Then you just repeating that last row, the Sl 1, K8, k2 tog, turn, until there are 14 stitches on each side. I think there will be 3 obvious sections, a middle and 2 sides and you want 14 on each side, I don’t know how many will be in the center at that point. Then you go on to the next part.

Thank you merigold for the quick reply, I will give it a shot, I think where I messed up was on the first row, and i didn’t turn…thats why, when I got the next part, I just kept turning and working the same 10 stitches! it looked really odd…

Here is what the pattern says starting with the instep.

Turn (in other words exchange the needles from one hand to the other like you do at the end of a row).

The next row you slip the first stitch that is on the needle in your left hand to the right hand needle, then k8, and k2tog. Then you turn again to work in the opposite direction.

so, where it says turn, I don’t turn and finish the row in purl? I looked up turning and people said to turn the work and then work it in the other stitch…I think that is where I got a bit messed up.

Yes, you just knit across a few sts, then turn as if you were at the end of a row, leaving the other sts to sit and wait. You’ll get back to them later.

so, where it says turn, I don’t turn and finish the row in purl? I looked up turning and people said to turn the work and then work it in the other stitch…I think that is where I got a bit messed up.

Often you turn and “work in the other stitch” as you say, but not here. Because the pattern says:

This part will be in garter stitch not in stockinette. So you will be knitting every row and not doing any purling in this part.

so when it says “Repeat last row” does that mean all of that?

or just the part from Sl 1…I have been doing just the Sl 1 and the stitches on either side don’t reduce at all! I just keep working the same stitches over and over! I can’t figure out what I am doing wrong…I have done 5 rows (in the Sl 1…) and started this little bootie over 4 times…lol, Lots of practice, but tons of motivation, baby needs some socks to walk in!

Here’s how you do it - k34, k the next 2 sts tog, then turn. Slip first st, k8, k2tog. You’ve worked back over 11sts out of the previous 35 and decreased them by one st. Turn and sl 1, k8, k2tog; this takes you beyond the first set of sts you did and reduces the st count by one. Keep doing this until there’s 14 sts on both sides of the center set of sts.

You’ve worked back over 11sts out of the previous 35 and decreased them by one st. Turn and sl 1, k8, k2tog; this takes you beyond the first set of sts you did and reduces the st count by one. Keep doing this until there’s 14 sts on both sides of the center set of sts.

Thats what I was doing, but it seems that when I get to the k2tog part there is always the same last two left over (the one I slipped and another one left…) so, the one I slipped always ends up being the one that wasnt stitched and then there is one after it that was…i realized, when i knit it, it wraps around twice because of the way that i am knitting and there ends up being an extra “stitch” when I come back to it. If I purl it and then knit (like stockinette) then there is not extra “stitch.” I dont know how to fix it. I know I am doing something wrong here, but what is it?

How are you knitting that when you knit it the yarn wraps around twice becoming an extra stitch? It shouldn’t. You just knit knit it as usual or maybe as part of the k2tog with the next st beyond it. Maybe we need a picture.

I am attaching a few pics:

This one is after I turn (for the Sl 1 row), slip the first stitch and have the needle under for the next knit…

This one I have the just wrapped the yarn and you can see on the right how it has wrapped once already and I have not slipped it off yet.

This one is after I have completed the knit (now, instead of having just two stitches on the right, I have three!)…I know I am doing something wrong, how do I fix it.

Here is a link to the album, in case the pics do not expand: http://picasaweb.google.com/anointedone435/Knitting?feat=directlink

You took the yarn over the needle after you slipped the stitch to knit the next one. Move it between the tips. You can also slip the stitch with the yarn in back so you don’t have to move it. Slipping a stitch purlwise is just how you put the needle into the stitch, it doesn’t mean the yarn has to be in front too.

Sue nailed it. You are getting a yarn over mixed into things. The easiest fix is to do as Sue suggested and slip the first stitch keeping the yarn in the back and then you can knit the second stitch without getting any problem.

My goodness…how silly of me, I couldnt even figure out how to fix it! it works now! (as if “it” was broken)…thank you! will post again when i need help…hoping to get these booties done in a few days time

here are some pics of the finished bootie, some assistance on how to sew this together.
Thanks. 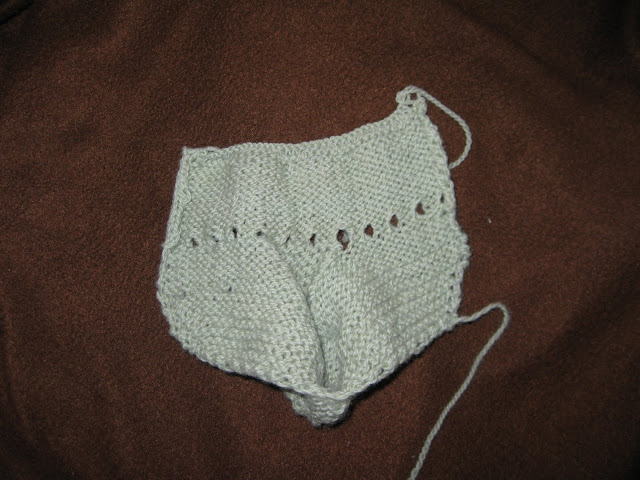 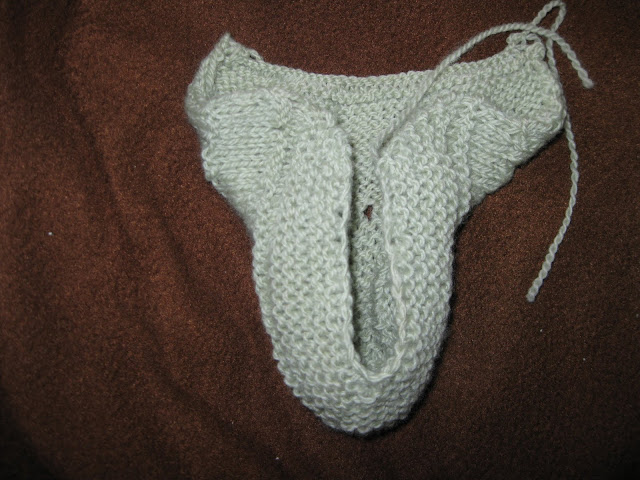 The picture is small but it looks like most if not all of this is vertical seaming of garter stitch. Here is a link to a page that tells how to do that. LINK

Scroll down to “Invisible Vertical Seam in Garter Stitch”.

Thank you Merigold, another question…I am working on the second bootie now and it seems that I may have mixed up the stitches some how when I get to the part where I shape the instep.
How many stitches (total) should I have when I get to the point where it says, SL 1, k8…if I do this step, I end up with 18 on one side, and 26 on the other end. If I continue, I am unable (obviously) to have 14 left over on each side, since the sides do not match when I start off. In total, it seems there are 12 rows on the other bootie when I have 14 left on each side.

You will also have regular mattress stitch sewing stockinette together up the back of the bootie. That is also on the same page as the garter sewing.

When you finish the increases you are suppose to have 24 stitches between the increases. Since I don’t have this on the needles I’m not sure how to interpret that. You would either have 51 or maybe 59 before you start any of the instep shaping. If you lay your other bootie out and count the stitches across it where you did the 10 rows of even knitting after the all that first shaping you should be able to tell. I think 51 is right, but not sure.

here is my question, if i dont start out with even stitches on either side, how will it end up being 14 evenly later?

when i did it earlier, i had 15 stitches left on one side and still 24 on the other to work with.

Have got the booties complete. I figured out that problem with the above question, i didnt increase properly in the first part, which ended up with a smaller bootie. Well, it was all good practice. I am making a second pair, which is coming out much better.
Here is a question tho, I would like to add some type of sole or something to the bottom of the booties, so that I can use them as “shoes” for my son, I was thinking felt? Any suggestions?

I will post a pic soon of my new pair of booties.
I appreciate all the help I got here, otherwise these would not be complete today!