where can I get, for free, that alligator scarf?

I don’t know but would LOVE to find out. That would be a hoot to do for my little boy. Hopefully, someone can help us out.

Isn’t that the cutest scarf - I love it too. It’s a Morehouse Farm design - they sell it as a kit. I’m not sure if you can get just the pattern. They have a bunch of animal scarfs. 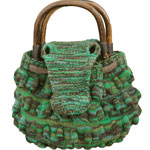 I bought the kit which comes with the pattern and the yarn. I am making it for my son…it’s very cute so far!

I bought the kit which comes with the pattern and the yarn. I am making it for my son…it’s very cute so far!

Yes, I saw the kit. Is it EASY, or at least simple? Was hoping though, that somewhere there was a similar one free to knit with my own yarn. I may have to just break down.

I love that gator scarf, but I can’t decide which I love more, that or the dragon?? sigh

What about a snake scarf?
http://www.knitting-and.com/knitting/patterns/scarves/slithering.html

My daughter wants me to make one of those for her, but I’d rather just get the pattern by itself, too. I wonder if they will consider selling it separately? :think:

I’ll check and get back to you all.

It’s very easy pattern. I’m not sure if they sell it alone or not.

http://funknitsforkids.com/2007/01/10/dragonscarf.aspx try this dragon scarf? and then join my knit along http://knittinghelp.com/knitting/forum/showthread.php?t=63880(plug)

edited this ones nice http://redthreadsblog.blogspot.com/2005/11/chinese-luck-dragon-scarf.html - another dragon but super nice.

I love that gator scarf, but I can’t decide which I love more, that or the dragon?? sigh

I wanted to do the gator but ds 7 really wants a dragon but he says no white coming out of its nose. He wants orange and red fire. I think since he was so passionate when I was just looking I will have to order it and knit in secret for Christmas. That should be a nice feat with all of the kids homeschooling. I maybe knitting in the bathroom.

I have the same problem … knitted Christmas gifts for my kids are next to impossible!

I’ve been looking at that alligator too. My DH and I have tried to tell from the small photo if the “bumps” on the gator’s back are made with color, texture, or both. Could you tell us.

I think the bumps are knitted/texture. I suspected they are picked up along the top and knitted that way somehow. Not sure how you get the 3D and not 2D tho. I emailed the company asking if I could buy the pattern online only as I am in Oz…and…yet another email bounceback for me.

You can probably use the techniques from this bath puppet, just adjust the yarn choice and length for a scarf. 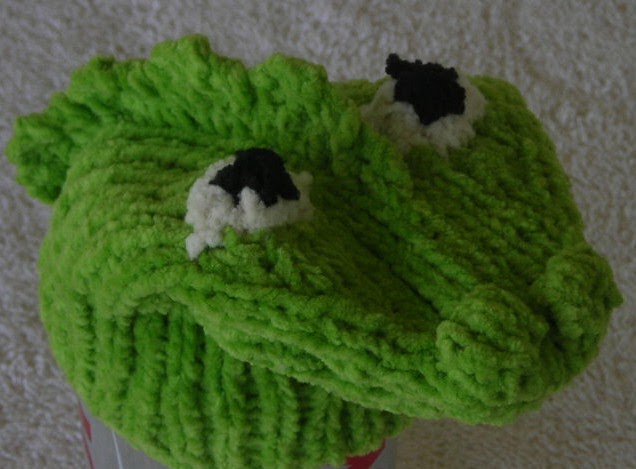 This is the first bath puppet I knit in Crystal Palace Cotton Chenille. I love the yarn, it's so soft and fuzzy, and it was just screaming t...

This may be an insane idea, but couldn’t it be done with shortrows somehow? I’m no expert at shortrows… but somehow I think I see some resemblance…

Now when pushing on the sides slightly I see triangular bumps appear!!!
Well mine look kinda sloppy, mostly cuz it was some scarp yarn on the wrong needles and done in a hurry… but the method should work.
To make it look better I would work in the round, only putting bumps on half, using that as the front and using the un-bumped side as the back. Also it might be a good idea to block the piece to make it maintain its shape.

The imaginative creativity and skill of you experienced knitters amazes me. Thank you for taking the time to figure this “black market” way to create the bumps. HA HA…

Question I have as a new knitter though is, what is “ktfbl”?

The imaginative creativity and skill of you experienced knitters amazes me. Thank you for taking the time to figure this “black market” way to create the bumps. HA HA…

Question I have as a new knitter though is, what is “ktfbl”?

Haha, well I’ll take the words “experienced knitter” as a compliment… I amn’t one though… just have a great deal of hubris and so think I can do anything…
ktfbl is short for knit through front back loop. Meaning that when you do the normal knit stitch you don’t slide the stitch of the left needle but make an additional stitch through the back loop aswell. That way you have two stitches where you before had only one.

A week ago or so, I emailed Morehouse Farms about the Alligator Scarf pattern & whether or not the pattern was available individually instead of w/ the kit. Here is the reply I received today:

The patterns for our new designs will be available online
later in the season.